So who’s gonna be MonHunning tonight?

Uhhhhh, maybe. Depends on what else I have going on.

All lot of reviews are complaining about the Denuvo drm. I don’t know much about it. But apparently it is negativity impacting the game. Game won’t even play, crashes, low performance etc.

I can’t afford it right now, so I’m still stuck on a spirited game of Dauntless. Sounds like I might be lucky with having a bit of a wait.

You can have a slow attack. But if I press a button during that long slow animation, my button press must be acknowledged .

How, may I ask? Let’s say I’m doing the overhead vertical slash with a great sword. How do I acknowledge that you, say, pressed attack? Pressed Dodge? etc.

What would it look like if a person was swinging a giant sword straight down over their head, and then mid-swing they tried to dodge to the side?

Painful, I bet. But even if we accept that someone could dodgeroll out of a swing like that, you’re now fundimentally changing the interaction with the game and the choices I make. It’d be like saying that I could take back farmers in Carcarsonne.

I don’t think you get it. You wouldn’t successfully dodgeroll, painfully or not. You would probably just stumble sideways like a doofus or just fall over. Maybe it would take even longer than if you had let the attack finish. You just have to display an animation on the screen to acknowledge that I have pressed a button. You don’t have to change the nature of the game.

Based on my experience and the experiences of people I know (combat with realistically-weighted simulation weapons), in general, it’s mostly impossible to redirect a fully-committed attack with a weighty weapon.

You can simulate this with a sledgehammer or axe. Try swinging with intent and ditching out halfway through. It’s impossible without hurting yourself or falling on your ass.

You miiiiiiiight be able to stop, but there are physical consequences to killing your momentum like that. You sorta…you know how when you have to slam on the brakes in a car like RIGHT THE FUCK NOW and everything comes to a screeching halt?

It’s like that. You lose more time and energy trying to stop yourself than you do by finishing and altering your next step.

It’s also possible to literally hurt yourself. If you swing a 5 pound weight with force and try to stop it at the apex of the swing, you will tear your rotator cuff.

So I mean, OK, you could put an option that lets you cancel a powerful attack, but the consequences of doing so are worse than if you just let the attack connect - so why would you do that?

This reminds me of how hard it is for baseball players to “check their swings” on a bad pitch. Once you get past a certain point swinging a bat, it’s pretty much impossible to arrest your motion.

I also think having a discussion about realistic physics in Monster Hunter is missing the point. This is a game where I can literally drop down a 400 foot cliff into an active volcano and plunge a greatsword made from a dragon’s dick through the eyeball of a giant demonic toad that shits exploding balls of lightning.

It’s not like the game is trying to simulate realistic weapon mechanics. I mean there’s really no reason a Hunter couldn’t cancel halfway through or turn a swing into a roll - it’s no more ridiculous than what already happens.

This brings us back to a discussion of game design philosophy.

Monster Hunter is a game of puzzle-solving and timing. It requires detailed knowledge of your ability set (and there are a number of unique ability sets, all of which you can modify with skills), the patterns of the monster, and its tells and timing. The whole point is to:

It’s a lot like a rhythm game. Rhythm gets off, you fucking lose.

So, I’d be down with a cancel, as long as the consequence of doing so is sufficient.

Monster Hunter is a game that severely punishes fucking up - most monsters can kill you in 3 - 5 attacks and can chain those attacks together. We’ve all been wombo-comboed with no hope of recourse. We grok this.

So if you cancel, you start an animation that takes twice as long as the attack you’re cancelling took, or something like that. As long as you are nailed with a consequence suitable to your poor choice, the game will maintain its feel.

Of course, right now, the consequence to a poorly-timed attack (which is like 90% of the reason you’d need to cancel) is that you get hit and lose like 1/3 or more of your health, so I’m not sure there’s a strong need to make it worse.

Of course, right now, the consequence to a poorly-timed attack (which is like 90% of the reason you’d need to cancel) is that you get hit and lose like 1/3 or more of your health.

The consequence of a poorly timed attack that I saw was that you just swing your sword at nothing while the monster goes somewhere else. Meanwhile your body fills with rage as absolutely no buttons on the controller respond as if you are watching a movie.

Did you use a healing potion? Did you notice that your character flexes after you drink one?

That animation exists expressly to piss you off when you have chosen the wrong moment to heal. That is literally its purpose.

It’s not like the game is trying to simulate realistic weapon mechanics. I mean there’s really no reason a Hunter couldn’t cancel halfway through or turn a swing into a roll - it’s no more ridiculous than what already happens.

And in fact, that already kinda happens - the same weapon that swings with weight and authority as you’re making an attack suddenly weighs feathers and good dreams when you’re rolling away after the attack lands. It’s not canceling the attack, but it’s still fucking odd how the weapon is suddenly going from too heavy to alter course, to light enough that you can do an almost acrobatic dodge-roll with it in your hands.

That’s one of the improvements they made in World.

You can also dodge-cancel out of sharpening, too.

In fact, you may be able to dodge-cancel more attacks in World (I main weapons that have backsteps rather than rolls)

That’s one of the improvements they made in World.

You can also dodge-cancel out of sharpening, too.

In fact, you may be able to dodge-cancel more attacks in World (I main weapons that have backsteps rather than rolls)

It’s pretty nice. There are some attacks and animations you can’t dodge out of, but they also tend to be either very short(ie, dual blade and glaive attacks, which are so fast that dodging out of the attack is essentially pointless), or power moves that you have to actively charge up to use in the first place, rather than being your bread-and-butter combos(ie, mid-swing on your lance counter-block, or your hammer’s charge-swing - though you can still dodge out of the charging).

It’s not just charging, either - you can dodge-cancel out of just about anything, from throwing your little capture net, to drinking potions, to snacking down on some giant manga meat.

Wait, they reduced the volume of arbitrary unfair bullshit that comes your way?

Personally, I loved the post-potion flex, because it was in keeping with the utterly ridiculous bullshit of this whole series.

I had these two dudes show up out of nowhere just to start shit while I was fighting the chicken looking fucker in the middle, and immediately proceed to mostly ignore each other and try to mince me - at a point where it would not be reasonable to expect a player to fight either one of those solo without preparation, let alone both at once. 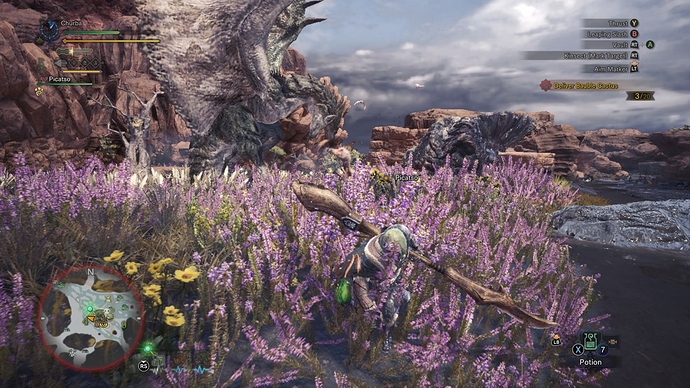 Also, the Angjinath seems to alternate between being an easily broken punk, and being an absurdly tanky fire-spewing angel of death, and I literally cannot figure out why. Like, sometimes I can take one solo with a minimum of fuss, other times I’ve seen them destroy decently experienced 4-man teams in relatively short order. It’s slightly baffling.