Sure, but this is where you get into how language is actually used. “Can I borrow your pen?” and “Will you lend me your pen?” are both grammatically valid, but the the former is more common than the latter.

In this case, Japanese is the opposite. You ask people to lend you something, not to borrow it.

If you want to talk about how English is actually used, then you don’t need either lend or borrow for the reply.

Can I borrow your pen?
Sure, here you go.

My point was not regarding the reply but the request.

An affirmative (or negative) response is okay in both.

I had to look up what “消しゴム” is. I already knew that 消し (“keshi”) was “to turn off” (e.g. the lights or a television) and I could read “gomu” from the second part, but for some reason my brain wasn’t able to put 2+2 together and realize that this word meant “eraser”, as in the rubber thing you use to remove pencil markings from a piece of paper.

So I looked up the actual definition of 消し instead of the context Duolingo taught me the word in, and saw that it actually means “to delete” or “to erase”. This matches german again, where the word “löschen” can refer to

Last week I felt kind of really frustrated with trying to learn japanese. Many easy mistakes. In exchange, today it happened a couple of times where I tried to figure out a complicated Duolingo prompt and was sure that I had made a mistake somewhere, but it was the best I could do at the moment, and it happened to be the correct answer.

I guess things are starting to sink in deeper. 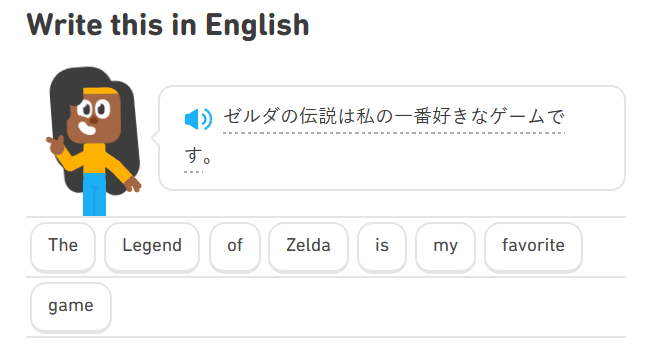 Also at one point Duolingo teaches you the words “Otaku” and explains the rules of rock paper scissors.

Still going almost 100 days in, but my motivation is flagging at times.

Anyway, another important message from Duoling.

This is my biggest bugbear with the japanese course on duolingo:

Duolingo gives you segments that usually should correspond with full words. Japanese uses a lot of particles that modify a word, indicate its usage in the sentence, or provide further context. These particles are always written in hiragana. Of course you can write any word in hiragana to spell it phonetically, though most often Duolingo teaches you the kanji for specific words.

Two of the most common particles are the topic-marker は and the particle に which is used to mark time or location (similar to the english word “in”). In the above problem Duolingo uses the word 判子 (a personal seal which is used in japan in lieu of signatures) but instead of using the Kanji which it never introduces it uses the hiragana はんこ, and it gives also that combination of hiragana as a whole word segment to select. However, it does not give the に alone but only the combination には despite it not being an actual word, but segments of two words for this sentence combined and the combination of the particles is very much allowed (e.g. here), making this look like two particles when in actuality it wants you to use the は and other hiragana to build はんこ.

This just feels like a bad trap that does not teach anything but only serves as a “gotcha”.