Sitting at home due to covid, I took on a new project of trying to learn some japanese. So this is a thread about discussing language and your progress in learning a new one, japanese or otherwise.

Please note that we have a thread called “Learning to code” so if you want to discuss a programming language, I’d recommend doing so there.

I have some rudimentary knowledge of japanese from previous attempts of trying to get familiar with the language. However, it is interesting to get to know it better and deepen some understanding.

For example, I had previously seen the Kanji 来 before as part of the word 来年 ( らいねん, “rainen”) which means “next year”. Today I learned that the character alone means “to come”, “to arrive” or “to approach”, which makes logical sense when the other character in that word means “year”, i.e. its literally “the coming year”. However, in a different context as a verb it is pronounce usually as くる (“kuru”) or simply き (“ki”).

Edit: Something else I just noticed: Duolingo rather soon teaches you the kanji for となり (“tonari”) which means “neighbor” or next to. It is 隣. That is of course a rather complicated Kanji, and I made a quick check on things I knew the word from already, such as My Neighbor Totoro (or となりのトトロ) and most of them simply use the hiragana as they are targeted at a younger audience.

I’ve been dabbling with a few languages over the years, currently I’ve been pushing through Norwegian on duolingo, it’s a place I want to visit.

By and large its easy and the words are easy to remember due to it’s mixing with english back in ye olden days, except in some places where the works are just whoa crazy.

Like kanskje (maybe), no idea why but it just doesn’t stick in my head. I have noticed a ton of compound words that exist in some places and not others, and I took a guess because kan(can) is a word in Norsk, maybe this is a compound word? It is, Skje means happens so it’s literally can happen, or maybe (which is our own weird compound word)

I’ve been doing Duo for Italian. I took Italian for 2 years in high school and minored in it at RIT. In my thirties now and I’d say I’ve got like 6 years of Italian education on and off over the past 15 years. Not exactly ideal.

My current streak in Duo is about 2 weeks.

My last trip visiting family in Italy, I picked up a Harry Potter book in the airport on the way out. Was a bit too much for me, so now I’m on the hunt for kids books. Hopefully just maintaining the streak will be enough motivation to finish up this time.

I’m on a 130ish day streak now, I sometimes feel like I’m spite doing it just for the achievement >>

Do you feel like you are actually learning? Can you speak/write/read the language more comfortably? I’m always questioning whether these language learning apps actually work. You’re obviously going to learn a few words, but can they really take you all the way from knowing nothing all the way up to fluently speaking the language with native speakers and reading books written in the language?

Yeah, a bit, spoken language is still a bit hard to listen to, especially if they’re speaking fast.

I feel like I can compose my thoughts in Norwegian more so than in Japanese or Spanish (the two other languages I’ve done dives into).

I do try to read Norwegian news papers and articles I come across on the web, and they’ve got a fairly standardized fluency test you can take from some of their universities. The last time I took it I’m at the A2 level which is still a beginner but pushing up into an intermediate level of understanding. I’m definitely at an A1 for Spanish and Japanese just requires too much time to gain any sort of fluency.

I feel like the apps are good for becoming literate in a language more than anything. As my recent trip to Spain showed me that speaking and being understood take a lot of practice with actual human beings. I was able to muddle through ordering food though!

I’m on day 15 of my initial streak. Will have to try and keep up with it. It’s I think the most important part: Daily exercise and repetition.

To answer Scott’s question: For now I definitely am a lot more engaged. When I watch anime or japanese wrestling it feels like I understand a little bit more. I’ve also been reading a lot of manga recently and try to look up some Kanji I come across, like the strokes in 飴 (“ame”, candy) that I posted about in another thread recently.

Duo and arguably any app will never get you from wherever you are to fluency. That only comes from actually speaking the language. It can get you closer. You do get more comfortable slowly overtime if you use it. Actually using it every day is the real clincher, I think, though.

Today in “Duolingo is weird”.

This is from before this thread was made but it kinda fits:

Things of Your Day General

2 things happened tonight: I was doing my course in Italian with duolingo and something nifty happened I remembered a friend recommended giffingtool for all my making gifs needs [image]

Sometimes duolingo really jumps in difficulty. I unfortunately failed this because of a new phrase I hadn’t quite gotten the hang of: くらいかかり (“kurai kakari”, which designates a length of time). 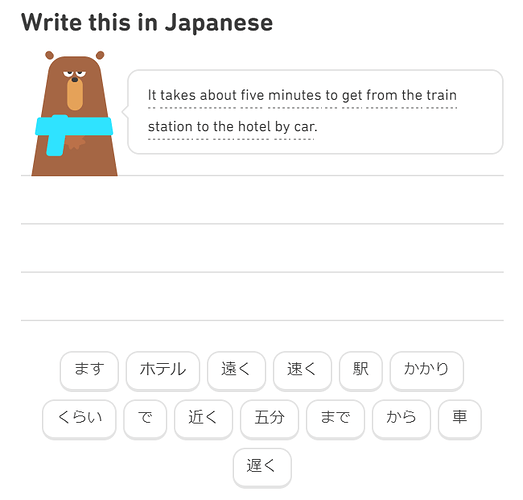 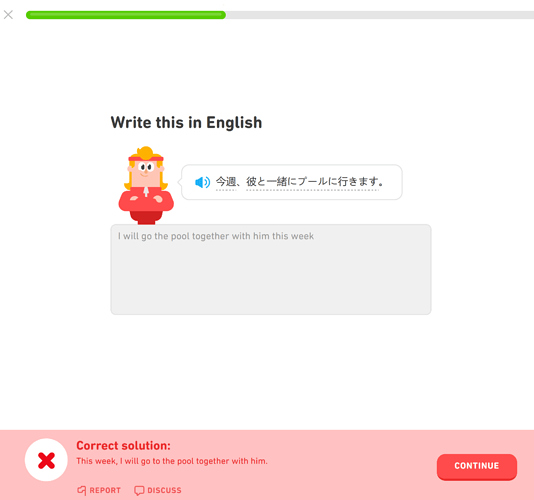 This is Bullshit! clap clap clapclapclap

In their defense, you did forget the word “to”

Well, I also attribute this to the setup, as I did this round off my media PC where I don’t have a mouse, just a touchpad attached to the keyboard, so I use typing instead of wordbank when I can.

I’ve run into this in places as well. It’s hard to blame them asking for a specific translation.

Who is “them” in this case?

I am determined to defeat this owl’s challenge. (Mandarin Chinese) 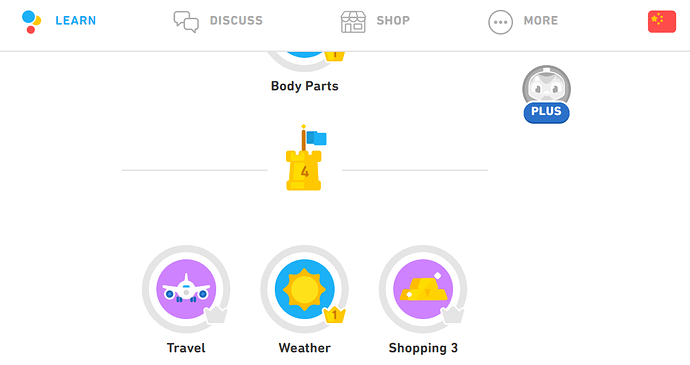 Duolingo and their programmers.

Sorry I wasn’t clear, I was just thinking about how hard it would be to accept every valid translation of any given sentence.

The curveballs Duolingo throws at you on occasion. 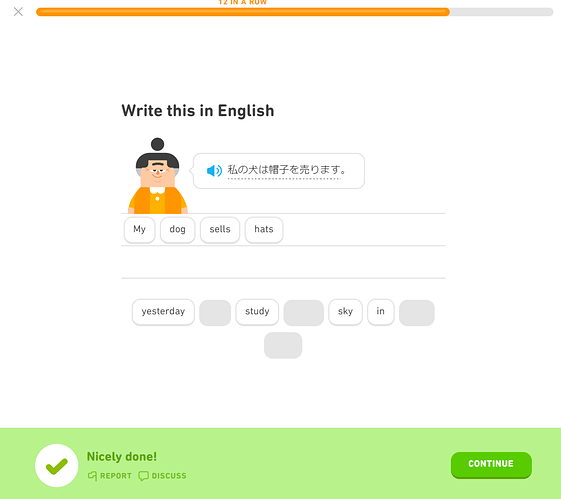