Closed Captions for our videos

Recently there have been several requests for captions on some of our panel/lecture videos. We would love to be more accessible, but the fact is that it is very expensive to do so on any real scale. I made this thread to coordinate any efforts on this front so we don’t step on eachother’s toes or do any redundant work.

Fan contributions are turned on for all of our videos except for a few that I’m trying out some paid transcription services. They aren’t cheap, but I want to see what the output is.

I made a shared public spreadsheet for anyone so inclined to mess around: 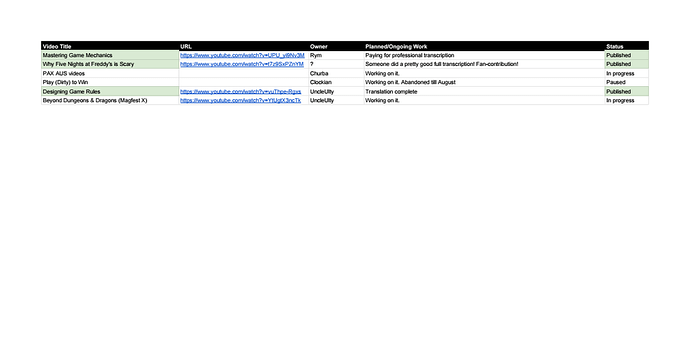 It is ready to be reviewed; it would be great if someone could go through the video and check for spelling, grammar, and readability.

I opted in some cases to sacrifice accuracy for readability, since I felt like situations where they would stumble over words didn’t need to be transcribed, though it’s possible that there are more instances of this that could be streamlined. But in most cases I did end up leaving in the extraneous words, such as ‘like,’ ‘so,’ but,’ and Scott’s ‘right’ in order to preserve their cadence.

A few things that I noticed that were amusing to me, or may be helpful to note for future caption work:

-Scott is also much more likely than Rym to interrupt the other person to interject some commentary, usually in one long sentence that ends with “Right?”.

-When Rym has an anecdote to share, he seems to get very excited about telling it, and ends up injecting a lot of ‘likes’ into his story, usually telling it very quickly so that he doesn’t get cut off.

-I never thought I’d have to try and figure out how to spell ‘bafmodad.’

In addition to all of this, it should be noted that I don’t watch many subtitled movies, TV shows, or anime, so it’s possible that the cadence of the captions that I added may be slightly off, compared to what people might be used to. For example a single caption block that might be too long, or break at an odd point. Feedback on that sort of thing would be great.

I quite enjoyed taking on this captioning project, but I think that if I do any more in the future, I may have to avoid worrying about a self-imposed deadline, since rushing to finish it over the weekend took some enjoyment out of it.

That looked pretty great! I spot checked it, and it’s already 10000x better than the auto-transcriptions I’ve been looking at. I put it live.

Wow. You are a true hero. However imperfect your work may be (I haven’t looked at it yet), it’s still 10000x greater than the alternative, which is nothing. I’m sure quite a few people who are hearing impaired will benefit from your labor.

I already knew all those things about the way we speak. I’ve tried to fix the “right” and “you know”, but it’s too hard. You know? Right? 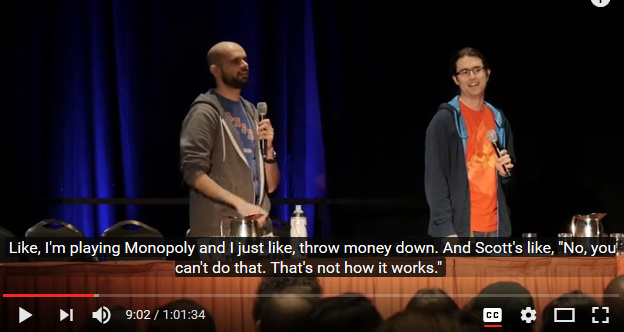 Mastering Game Mechanics now has professional subtitles. I just paid a company to do it.

They did a great job, and even got the word “provost.” They missed “tantamount” and “kingmake,” but emailed me the timecodes of those two spots so I could edit myself.

Going to geekbyte on the experience with them? Was it worth the cost?

I see that the pros parsed out the ‘like’ and 'right’s, while I had left them in. Which of the two techniques do you prefer for any future captioning?

I think we should probably ask the people who are hard of hearing and are reading the subtitles.

I still have deaf friends from RIT I could text and report back.