This will (hopefully) replace the current forum, which will be archived and publicly available after the cutover. Scott put a lot of work into getting all the options right (and turning off the weirder things), and Rym did all the data entry and sanity checks.

There is no one on this forum, so boring so bad

Just kidding, actually I love the features of this forum, Huge improvement!

@SkeleRym I have yet to significantly poke around with the features, but my initial poking is promising.

The layout is a little busy at first - lots of new information and stuff to navigate. It’s a bit of a contrast to the previous forum, which I found to be somewhat more simplified. Might be a rocky transition for some.

Yeah, it’s busier, but I’ll credit them for the fact that all the new screen ink is actually functional. The timeline slider on the right is pretty swag as threads get longer.

The preview and drag/drop image upload will be a big deal I think.

Also, I configured it to keep all images on S3 and never delete them. So it’s like we have our own imgur. Images and such will never disappear and become 404.

Looks ok, but a lot of white. So bright for my indoor eyes. I come back in my spare time to check it out.

I agree with @Rochelle, A dark mode option would be nice if it’s possible.

I just complained about the lack of a preview but I realized it’s actually displayed in real-time in the lower pane, but covered by a helpful popup. So we’re cool now.

Agreed, I love the new real-time preview. Much more convenient than having to switch between a post tab and preview tab all the time.

I also really like that we have, well, likes. There has been many a time in the history of the FRCF where I wanted to show my appreciation for a post or comment but either did not have the time to actually type out a response or didn’t want to just make an empty “Thanks!” or “Good post!” reply. A convenient little heart is great for that!

My first thoughts when looking at the site:

After a few minutes though, both of those thoughts went away once my eyes got used to it. I still think the Suggested Topics is weird, but it’s easy enough to ignore.

EDIT: Having to hit a button to do any replies is also odd. Granted you also had to click into the reply box which equates to the same thing, but the difference in size will take getting used to. Is there a shortcut for bringing up the reply box? That would be aces.

Honestly, I’m fine with it. A dark option would be nice, but otherwise, it’s effectively identical to the BoingBoing comments section, so I’m already used to it.

Scott stick it to the man, make it httpssssssssssss

I tried, and it didn’t work. It’s Discourse fault, not mine. I’ll try again later.

What? That should be nginx’s business, not discourse’s.

Discourse’s official distribution is via a docker container. NGinx, Postgres, everything is inside of that container.

They provide a configuration where you enable Let’s Encrypt. All you have to do is change three settings in a file and rebuild the container. Then SSL will be on! I tried this. When I did so, the site was 404 on every URL. It did not work. It’s Discourse’s fault.

I’ve been playing with Docker (which I’d previously ignored). I have thoughts. =( 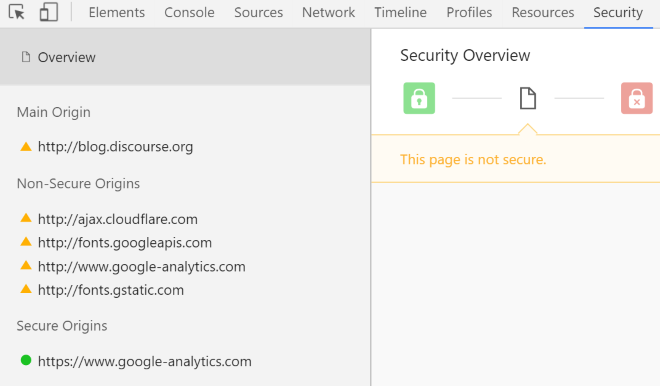 ❗ This guide is only for existing installs where HTTPS is not enabled. Following the official setup guide automatically enables HTTPS by default. So you’d like to add https to your Discourse absolutely free, courtesy of our friends at Let’s...

FWIW, I always enable dark mode because of a usability issue, so what I used on the old forum and what I’ll use here shortly is a chrome extension called Stylebot which allows me to alter the CSS on this site for me permanantly, then I just designed my own theme on the fly. It looks terrible but I can read it without little floating eye lines distracting me the whole time.

this does have a dark mode. But it forces everyone into dark mode. Then we’ll have people complaining they can’t get light mode.

Is there a way to minimize the pinned threads at the top? They take up a lot of screen real estate. I’d want to at least hide the preview text.