Can anyone report in? Is it everything we hoped?

Also, a game controller isn’t ideal, but is it at least acceptable?

I’ve been playing with gamepad. Not ideal, but better than I expected. Better than mouse/keyboard because for flying you want sticks that return to neutral, and a mouse does not do that.

I’ve played with a 25 year old joystick and mouse and keyboard and both in and out of VR and so far it’s pretty good though still trying to figure out buttons and best setups.

Can anyone report in? Is it everything we hoped?

I don’t know what you hoped, but it is good.

The only complaints I have so far, which I’ve already said in the discord, but repeating here:

Sticks feel a little heavy or dead, because they’ve accidentally stuck in a 20% deadzone as an unchangeable default - as in, if your deadzone is set to 0%, it’s actually 20%. It also makes things a bit twitchy and tends towards over-correcting. The flight model is fine, just that input is a bit cooked. It’s also kinda baffling why, because that wasn’t present pre-launch, it’s only in the release version.

Joystick control prompts are, at best, unhelpful. So far, I’ve counted at least 15 different prompts it’s given me that are “(Joystick symbol) 1”, but are not actually button one(the trigger), and sometimes, not even on the stick, they’re on the throttle. At least one control in the default binds is bound to a button that doesn’t actually exist, and I’m using a stick they explicitly call out as being supported by default, an X52.

Finally, fleet battle tutorials are broken, and just don’t complete for an unknown reason. It seems to be luck, though - sometimes it works, sometimes it doesn’t.

Everything else? Pretty good! Story’s a bit rote in that particular star wars way, but quite fun despite that, characters are decent, the missions are pretty fun, it’s quite pretty out there. It feels good to play, and decently engaging.

I’m playing in VR with a full HOTAS and aside from menu/config/setup issues, the game is fantastic.

I’ve been playing with gamepad. Not ideal, but better than I expected. Better than mouse/keyboard because for flying you want sticks that return to neutral, and a mouse does not do that.

This is promising, as I’m most likely to use a gamepad. Which one are you using?

8BitDo SN30 pro+. It’s a perfectly standard gamepad. I bought two and got rid of almost every other gamepad I had. They work with everything.

I have an xboz PC controller.

Can anyone use these analog stick defaults? Who decided to put pitch and roll on opposite sticks?

I’m using them. It makes perfect sense to me. Every freespace game I’ve ever played pas pitch and yaw on the same stick, with roll bound elsewhere.

I suppose it will take care of itself once I can get a real joystick.

Here are the controls for the original TIE Fighter. 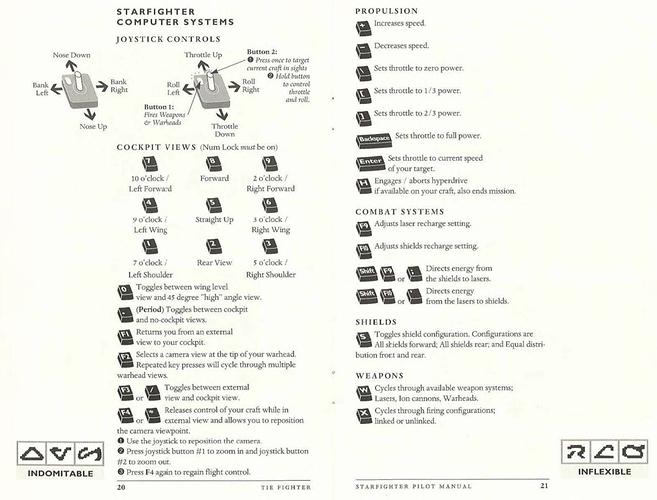 The sticks does pitch and yaw by default. You were supposed to hold down button 2 to switch the stick to throttle/roll mode. Be glad you have two sticks.

The ship might tilt a little bit, visually, when you “bank” left or right, but the targeting reticle goes directly left or right in a straight line. Only roll will make you actually roll.

Man the quality of life improvement going from keyboard and mouse to controller is stark. Really digging this so far.

We were going to review it tonight, but I had a plumbing disaster.

Spoilers for our review: it’s a real good game. Not 100% polished, especially in configuration, menus, and matchmaking… But the game itself?