Podcasts You Listen To

Continuation of this thread from the old Forum

Salut all, I am always looking for more podcast recommendations, the following is a list of podcasts I currently listen to (in no particular order) and I would recommend any of them if you haven't heard of them.

Right now I just listen to The Doug Stanhope Podcast and Election College, but I’m looking to expand because audiobooks are getting expensive. What do you guys listen to?

I listen to, currently:

Edited to add:
I used to listen to 538 and to NPR’s Politics Podcast, but quit politics podcasts cold turkey, right after the election, until about a week ago, when I started listening to Slate’s Political Gabfest again. I just couldn’t listen to them anymore considering how wrong everyone was. Not sure if I’ll go back to 538 or NPR. I probably will, but during the run-up to the election, I went down a rabbit hole with politics podcasts, listening to 538, NPR, and the NYT podcasts every day.

I have a few other I’m susbscribed to that I will often skip, but listen to if I’m driving for work and out of other options.

In no particular order…

I’ve got a couple others I’m going to start listening to, but these are the only ones I regularly listen to right now.

A few others I listen to when they have a topic I am interested in.

I thought Hawktalk was going to be about actual hawks. I was excited then disapointed.

In no particular order

If anyone suggests that you listen to a show called Friday Night Party Line, don’t do it, it’s terrible, the hosts are dumb, and one has a really stupid accent.

I assumed it was an AV problem. Isn’t his video always upside down too?

I’m not going to throw the whole list because since I’ve started to replace more and more of my podcast diet with audiobooks I’m not up to date with many of the podcasts I listened to. That said, I want to give my praise to First Mondays

Two lawyers who are both former supreme court justice clerks generally talking shop about the inner workings of the supreme court.

If nitty gritty legal details of the last check on the president’s power in this country is your thing, I highly recommend it.

Okay, so instead of just big lists, which I like, but aren’t really useful for knowing which are anyone’s favourite, how about we all recommend just ONE podcast? Not your favourite podcast, but the one you are most excited or interested to share.

I’m going to go with the Pessimists Archive Podcast. There are only three episodes so far (monthly podcast, I think), but they’ve all been good. It looks at technology that, when it was first released, there were many predictions that it would be the cause of the end of society.

The first episode was about the Walkman. The second was about when “the good old days” were, when we say things used to be better. The third was about recorded music itself. I like the reporting, the stories, and the balance of the viewpoint.

I regularly listen to:

If I had to give one recommendation per Luke’s request, probably Dear Hank and John, if you enjoy vlogbrothers you will enjoy this podcast. 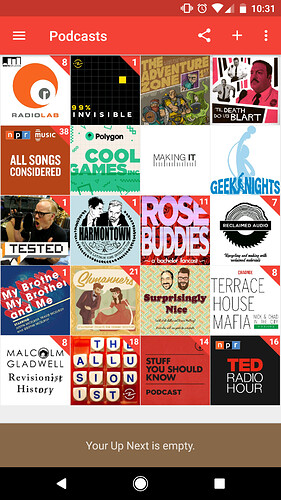 As far as a single recommendation, probably The Adventure Zone. It’s three sweet sweet brothers playing D&D with their Dad. The production value and the goofs are all top notch.

I have way too long list of podasts on my iTunes subscriptions feed, but as I don’t actively listen most of those currently, I’m not going to list all of them here. So I guess I give the stuff I’m currently listening and what I’m planning to pick up and catch up on soon(ish).

Friends at the Table is tabletop rpg actual play podcast. It’s the main reason why I haven’t been keeping up with anything else, as I’ve been listening FatT every time I’ve walked to the store or anywhere.

Giant Bombcast and Giant Beastcast two videogame podcasts from giantbomb.com. Beastcast is probably superior, with better hosts and shorter episodes, but I’ve usually kept up with both of them.

Fast Karate for the Gentleman is mandatory listening.

Geeknights, and Friday Night Party Line are on top of the list of “podcasts that I haven’t listened in ages, but I really should as they are really good.”