Good luck! it gets pretty damn intense at the end. A car in a fog match could be good, but there’s no real armor in the front so ramming isn’t a great tactic when the other player is aware of you.

I do find duo or squad matches much more fun, when the other people have a mic.

Oh no, the car isn’t for ramming. It’s for avoiding too much action in the early game and getting into the late circles without dying outside. The kills come from crawling through the grass in the fog and sniping people as they run past.

The kills come from crawling through the grass in the fog and sniping people as they run past.

This is how I got #2 this past weekend. I also was lucky enough to stumble on an airdrop container no one had found with an M249 and an 8x scope in it, which is better than any sniper rifle I think.

Also if anyone wants to play a round I am playing as of 7:40 PM Eastern.

If something is both “bad” and “widely popular/discussed,” then there’s something important about it.

So PUBG is bad, then? I don’t know much about it since I haven’t really been keeping up with what’s “important” these days, so might I ask why that is?

I’m somewhat inclined to give this game a shot if many of y’all on the forum are playing it, and starting out with a few of you might be fun.

AU<->US latency is still a big issue, but I guess if Churba plays this game with Americans it may be worth trying.

There is an oceana server and a s asia server as well.

Yes, having a car is super important in the late late game getting to the zone and not dying outside. Nothing worse than having to leave a wounded teamate behind because the blue wall is coming.

Yeah, but if the people I want to play with are FRCF peeps the Oceania server isn’t too helpful

AU<->US latency is still a big issue, but I guess if Churba plays this game with Americans it may be worth trying.

Honestly, it’s not that bad. It can get noticable around peak times, but generally it’s not an issue - IIRC, the way the netcode works, you only get updated on the area near you, so it’s usually pretty snappy even on the NA servers. If you need a middle ground, Asia works well enough.

Servers can be wobbly as fuck right now though, because the game is popular enough that they simply don’t have the server capacity to deal with the load.

My two duo matches I played yesterday were on South America servers. I’d say it wasn’t too bad, as I didn’t experience any lag or anything… until of course I was running outside the circle at the end and died after network lag detected. Maybe the latency hadn’t been an issue up until that point.

Also, if you’re getting freezing and network lag when you open your inventory, turn off character rendering in your inventory, it’s under the options. 99 times out of 100, it seems to fix the issue.

Nope, that was the only time it happened. And I wasn’t looking at the inventory, I was running to get back in the circle. Also I’ve already turned that off.

Thanks for that tip. I’ve sometimes felt that opening the inventory feels a bit sluggish and for hasty looting that’s not great. So I hope this helps it. 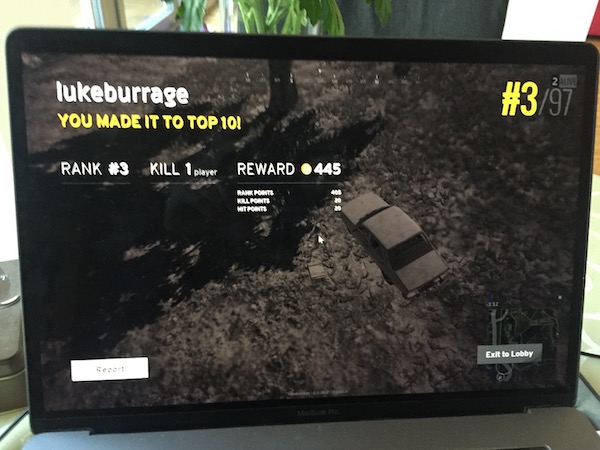 15th match. Ranked 3rd. 1 kill. Died getting out my car to early too heal when I should have gone an extra loop away fro the action.

I’ve come to the conclusion that after watching about 80-100 hours of experts playing PUBG over the last few months, that gives me all the knowledge and strategies and I know the map and the buildings and the terrain and recognise the item options and know what bullets and attachments go with what weapon…

BUT there’s no way that my fingers can just know what to do in the heat of the moment in the end game. That’s going to take a whole lot more practice, and I’m not going to get much practice if it always takes me 20 minutes to run into my first opponents. So instead of going for wins I’m going to go super aggressive for another hour or so of play, just to get my fingers used to the keys and be able to aim properly with any weapon that I might have at the end.

If you have a car, and the game is down to just you and two other people, why not just try to run them over?

They were in a building.

The best way to git gud is to play it spicy. Drop down into cities or the military base, get some guns quick and do some shooting. Don’t camp in a bath tub, either keep moving or at least keep watch through windows. Focus on kills rather than rank.

I avoid getting cars except to use temporarily to run for the safe zone border and abandon it a few hundred meters into the safe zone. I find all it does is attract unwanted attention.

The safe zone was only about 100m across by this point and I had to get into it way too quickly!

Oh I get that I’m just saying in general I avoid them because of noise.