My plan on getting home from a few weeks away working and traveling was to install Windows and steam and PUBG on my MacBook Pro and test it out. As it turns out, it runs perfectly fine!

I’ve only played four games so far, with one kill, three deaths and one abandoning the game due to it taking too long and me having to leave the house.

1 - 1 kill
Stayed in house getting used to controls.
Died because messed up key binding and wrong fire mode.

2 - 0 kills
Fog match
Worked out more controls.
Died getting into wrong car seat and was shot looking how to move seats.

3 - 0 kills
Not sure why I went for that care package drop. Got it, but died sooooo quickly after.

4 - 0 kills
Hung out with car on top of the hill.
Took to long and had to leave.

Now I’m looking for a squad I can join up with who can carry me through some proper gameplay.

I’m down to go duo or squad with you sometime. My Steam name is also Panfriedmarmot.

Sweet. I’ll look out for you on Steam.

I played my first duo squad games with a friend from Peru. It’s waaaaay more fun with a team mate. He’d not played with a team mate yet before either, but we’re certainly going to do it more. We had a great moment wiping out another duo in our second match. We finished in the top 10 teams with three kills between us.

Both times we died to the circle, the second time after network lag on my end. We need to get better at finding vehicles or not getting distracted by each other. In a solo game I’d just run off, but being with a team mate we’d hang about for each other being careful… then circle.

Next week I’ll jump in on this. This game is too important to ignore even if in the end I don’t enjoy it.

Next week I’ll jump in on this. This game is too important to ignore even if in the end I don’t enjoy it.

I’m genuinely curious what you mean by this. Do you mean for the purpose of reviewing it for your show?

Y’all should join the Fast Karate Discord and join the ranks of Anteater Squad, because PUBG is 1000% better in a team.

That sounds like a good plan. Probably better than if we make a GeekNights only squad. Let’s team it up.

There’s a ton of bad anime that I will watch because they’re big enough that they matter to the overall story of anime. Same with games.

I don’t particularly enjoy a lot of famous movies. But I still watch them, because I want to have a broader understanding of the craft, the audience, and the space as a whole. I’ve played games I hated to understand what the deal is.

GeekNights isn’t a goal: it’s an effect of the way I interact with media. It’s a record of my increasingly holistic understanding of media.

I’ve been playing PUBG for the past week or so and I’m getting pretty into it. I would totes group up. My games in Duo/Squad have been more fun than Solo. Also diffuses the tension when you’re not just sitting silently in your room and then SUDDENLY GUNSHOTS.

This is veering way off topic from the thread subject, but I guess you and I interact with media differently.

I don’t really care about the broader understanding of what the craft is, the audience, or the space as a whole. I only have X number of hours in my day, and I’d rather not waste them watching bad anime, reading bad books, or playing bad games, just to get an overall “big picture” about what’s happening in that particular medium. I enjoy what I enjoy, and ignore most of the meta-context.

I’m not criticizing you, I’d rather just not waste my time watching bad anime or playing a game I don’t enjoy just for some broader picture. There’s already too much media out there that I want to consume, but don’t have time for. I just didn’t understand your statement.

If something is both “bad” and “widely popular/discussed,” then there’s something important about it.

Although sometimes the “important” thing is just that people are suckers for Lost-type shows like Attack on Titan.

I watched enough AoT to understand why. I know why now. It’s still an important part of the medium.

Y’all should join the Fast Karate Discord and join the ranks of Anteater Squad, because PUBG is 1000% better in a team.

(also for some reason twitch embed isn’t working at time of this post? But whatever.) 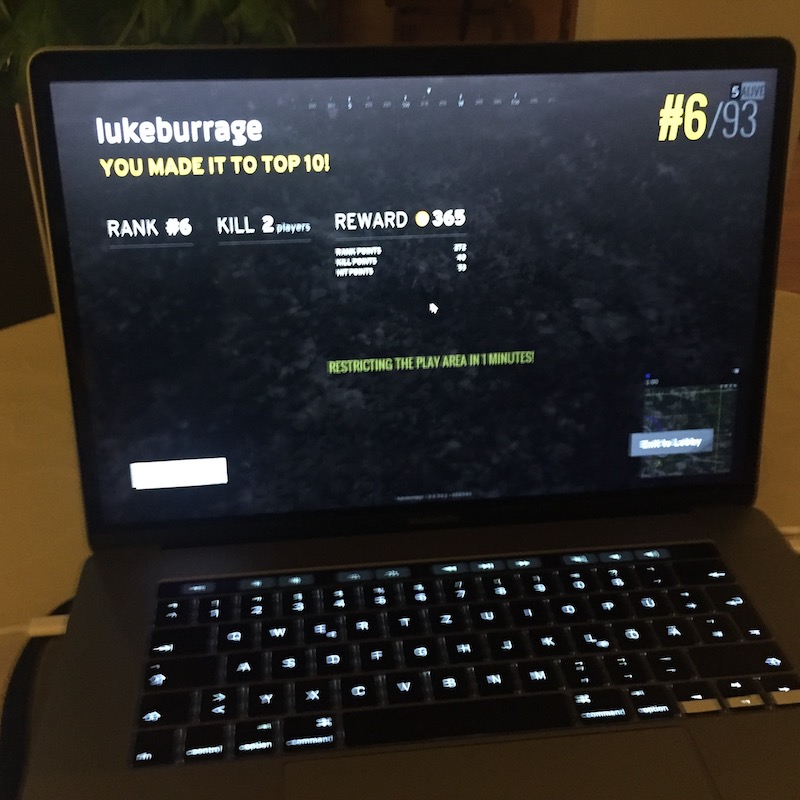 My 13th match, my first top 10, 2 kills… died outside the play zone. The circle is killing me more than anything. That comes from playing way too carefully, I guess. In this case I spent too long looting the last person I killed, which was just before the circle started coming in, and I didn’t realise how quick it was going to come in.

Highest I’ve gotten is #3. The game changes from early game, mid game and late game. It’s interesting how much of a change in tactics there is.

I tend to try to parachute as far away as I can from people, but then I usually have to be ready to move and find a vehicle if I don’t want the blue line killing me. That means being noisy. For such a “simple” game there is a ton of decisions to make on the fly.

Watching bad anime or playing a bad game by yourself sucks. They can be very entertaining in groups though. I miss bad anime nights with Uncle Yo.

While that may be true, I don’t think that was the context that Rym was talking about, although I could be wrong.

I know this is utterly overconfident on my part, but I feel like I can get a chicken dinner within a few more hours play, say maybe by my 20th match, if only I get another car in a fog match.