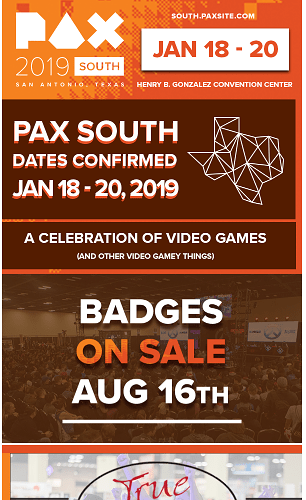 Gonna get me that Schilo beer + Reuben one-two.

Don’t think Jeremy and I will be able to go this time around.

I am probably actually going this year!

What are the good hotels?

The Contessa is the good hotel.

At least we’ll see you imminently in Seattle.

Thanks, I think my friend and I are going to do the Best Western because College budget

Hey @linkigi are we doing the room share bit again?

EDIT: It just did.

Oh no. 5 minutes too slow. Gotta get some Contessa.

Uh, there are no hotels when I search. I think it’s broken.

It is probably broken. I just got the Grand Hyatt 1 minute ago.

I tried to call on the phone, and that was also broken?

I’m a dumbass and was searching the wrong dates.

Badge and hotel get!

Badge and hotel get! Still gotta fly there though… sigh

Got badge and Hotel.

@Coldguy Nah, I don’t think I’m gonna do South next year. Gonna use vacation days for Unplugged 2019 instead.