PAX West says they are planning to go on. Pretty sure this is just legal/contractual obligations. If they cancel of their own volition, then their insurance won’t pay out, they’ll be on the hook to pay the convention center, etc. If they’re forced to cancel, then they get out of all their contracts. Since it’s too soon, they’re required to say they plan to go on, for now. I give it a < 50% chance of happening.

If you buy tickets, make sure everything is fully refundable. If it happens, will I go? Maybe.

Has Reed refunded badges in event of cancellation? Have they ever been in this situation before?

I’m not even sure if I’ll trust any large convention until at least next year’s unplugged. I’ll miss a year of enforcing, but so be it.

I am of a similar mindset. I have a hard time expecting I will be willing to make reservations and travel plans for an event that, while very enjoyable, I have done many times and would be a breeding ground for any latent infection. There would have to be some kind of unlikely medical quasi-miracle between now and then (either prevention or highly effective and widespread treatment that makes it completely benign) for me to risk myself and others by attending a PAX. That doesn’t mean I plan to sit in my house all summer, just not going to travel to Seattle or other city to congregate with large crowds of people.

Which makes me wonder, even if PAX were to proceed (which I agree with Scott is 50/50 at best), would they get enough Enforcers to participate?

In Berlin there is already guidelines on best-case scenarios for events through to October. As in, no public events with more than 100 people until August no matter what, no events bigger than 1000 until October.

Letting people know this is going to last a long time is a minimal level of governance, right?

Our nation is too dysfunctional for that. Generally every couple weeks various agencies push the restriction dates out a couple weeks further.

PAX Online schedule is out

I haven’t decided whether I want to PAX Online live or treat it more like a GDQ, where I pick over the videos slowly for a month afterward. 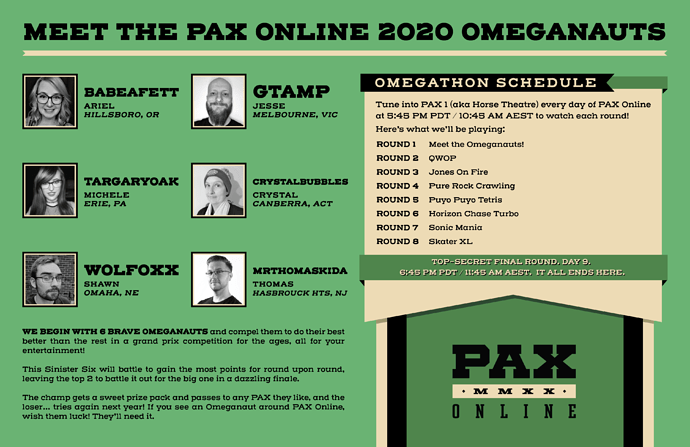