[quote=“Starfox, post:140, topic:291”]
I’d be interested to see pick rates from like 20th, 50th, and 95th percentile regular players, and then pros.
[/quote]Funnily enough, Pros picks are one of the ones that are readily availiable - after all, you can find their names pretty easy, and even if there wasn’t already sites looking at pro stats, you could pull them up easily enough on the stat sites with their usernames. The rest, though, that’s going to be bloody difficult, and I doubt blizz would be forthcoming. They’re pretty notorious for playing their cards close to their chest.

I think the durability is more of an issue. It was originally about 3 rockets from Pharah, now it’s about 5 or so.

Also healing while on the run can be annoying to deal with so it should be made more challenging to manage healing vs shooting.

I can see a bunch of shield stacking compositions with here which will push the popularity of Sombra and people learning how to play her to the fullest extent.

It occurs to me that the change to D.Va’s shield and Bastion’s buffs did not occur separately. D.Va’s ability to block bullets the second they are fired means with some coordination another character can get within point blank range to kill Bastion safely.

Killing Bastion in its current state is fairly easy, the issue is when there is a team comp based upon him, it takes almost the entire team to expend resources to kill it after which the rest of the enemy team are still a threat.

The good part about this Bastion thing is seeing how everyone has become very aware of how their character deals with Bastion. The downside is when you get a Bastion who has trash target selection on your team and you invest character picks based upon creating a Bastion composition.

Man is it just me or are there way more assholes in the competitive mode? I got the game a couple weeks ago, just playing quick play and everyone has mostly neutral playing normally, generally with no mic and those that did were usually friendly enough. A couple games into competitive and I get some guy trolling racist shit and talking about Trump, and then a couple games of people just shitting on new players. Also, my computer crashed during the start of a match (pretty sure power supply is just too weak, new one is on the way) and I got suspended for 30 minutes >_>

[quote=“ninjarabbi, post:146, topic:291”]
A couple games into competitive and I get some guy trolling racist shit and talking about Trump, and then a couple games of people just shitting on new players.
[/quote]Hard to say. I’ve seen a lot of that in quick play, and Sk0pe and I ran into a few playing competitive together, but then again, I also don’t play much competitive.

Then again, if there’s anything on this earth that proves the adage “Hell is other people”, it’s multiplayer games that include any form of chat function.

That type of nonsense is much less common once you’re above the middle of Gold and getting close to Platinum.

I don’t know what tier you are on but I have found that at lower levels the are people who are bad are angry they are bad but think they are 1337 E-Sports Athletes and act shitty instead of just playing and trying to improve. Also general Greater Internet Fuckwad theory. Anonymity + Audience = Total Fuckwad

Yeah that does sound about right. I’m pretty low ranked, i had some shitty games during placement and then a couple afterwards that bumped me down from gold to silver. I’ll probably stick to quick play mostly for a while. I’m getting better though, I got a decent play of the game and I noticed sK0pe was spectating at the end, though I’m not sure if he was in the actual game or not since I wasn’t really paying attention.

And it’s not that I didn’t expect racist assholes, my previous experience has just been more randoms calling people slurs rather than more of a rehearsed-sounding 4chanish copypasta kind of thing. Oh and I forgot to mention dudes just making random annoying noises the whole game, though that’s nothing new. Thankfully mute exists, it’s just a pain to get to when you’re not waiting for a respawn. 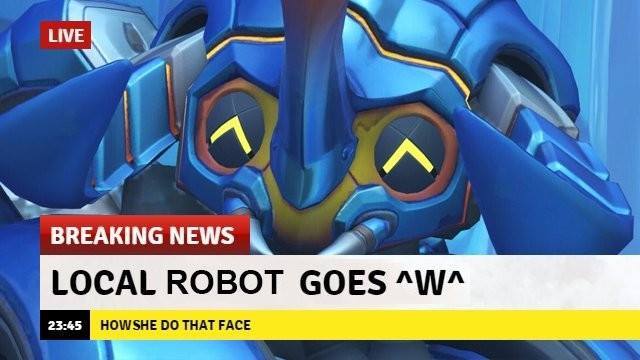 I was checking if I could play on the ping difference with you but realised it was too high once I joined so I spectated a bit.

I got dropped to silver after my unlucky run with Churba at the end of last season. (I didn’t realise a bunch of new people would just play placement matches at the end of the season so ended up dropping 500 points in 10 games.)

After doing my placement matches, the people have been ok to middling however I see those toxic personalities more in quick play then competitive. As you’ve seen,all you have to do is mute and report them.

I would recommend at your level you need to hard carry the team, because you can’t expect the team to know how to aim or know how to block (like Dva players at this level will just sit there shooting and forget that she has the ability to block all incoming damage, Zarya’s don’t know how to build up charge, Reinhardts are too aggressive with no backup).
People generally just waste their ults when the fight is already lost.

I’d recommend picking up a few self healers, like I don’t have many hours on Soldier or Roadhog but can do far better in terms of winning the game with them than Tracer or Zarya. I can also sometimes carry a team with an Ana by calling out what to do but if no one is in the voice chat it’s hopeless. Also I noted you were playing Sombra which requires insane amounts of communication to pull off or just really stupid enemies.

A frustrating thing I found today were groups of assholes who wouldn’t join team chat and pick champions that they ended up being very poor at. On top of that you couldn’t communicate any strategy or even basics like changing off a key character like Reinhardt to Junkrat and expecting people to notice or shuffle the team composition accordingly.

Omnutia and I have been doing out placement matches today, and so far, it’s going okay.

Bad: At least one abusive asshole every match, lot of folk who stay with one character all match, even when entirely unsuitable, while demanding others switch. Lots of Sombra hate from people who can’t play sombra.

Good: One team we went up against, most of the team left, but three dudes stuck it out, and at the end of the match, our team was falling all over themselves to congratulate and thank them for sticking it out.

“Pretty Low Ranked…” “bumped down from Gold to Silver…”
I’ve never SEEN gold. Being old and denied video games in my formative years has taken its toll.

In upper gold, I’ve found that if anyone on my team choses Sombra, Bastion, Widow, or Hanzo, it’s a guaranteed loss.

I have one friend who occasionally play successful Sombra and other with sometimes good Widow. Bastion is good this season and as much as I hate Hanzo, I’ve won games with them too.

Picking Hanzo on it’s own is not a bad sign. Picking Hanzo when you are last to pick and team has one tank and one healer, if even those, then you have a problem.

LOL what can you do? I’ll suck it up and do my best at my level and curse my mom being suckered by every 90s moral Panic she saw on Oprah.

Good Sombras and Widows are very rare, the only ones I’ve seen were calling out targets and organizing movement the entire game. Bastion was tuned back on the damage reduction a bit so I’m pretty happy with him now but most people don’t seem to know how to play him without the entire team’s protection.

My current favorite strategy is Lucio + Symmetra shield. 32.5 HP per second regen on the whole team in most situations, roughly equivalent to everyone having a zen healing orb.