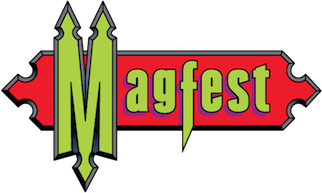 We’ll be there Thursday-Sunday! We have six panels.

Anime Openers from Around the World
11:30AM
Panels 4 - Chesapeake D,E,F

Question would anyone want me to do a dump of all the awesome MAGFest stuff to do this year?

Uncle Yo and I are doing a panel where we’re going to go over the Magfest schedule and shoot the shit with the audience.

Come hang out with us…cause there’s nothing else to do then.

2017 will be my first year not going to MAGFest since 2012. That’s usually the only place I tend to meet other FRC Members. As fun as it always is, can’t invest the moneys.

Tear it up, crew!

This MAGFest has even more music than usual, and I’m excited to be coming back. I’m going to be rocking out all weekend.

For all, I do this each year for me to make sure I can make heads or tails of the schedule. This year I am opening it up to everyone. This is the (unofficial) schedule sheet for reference. Best printed within Excel: 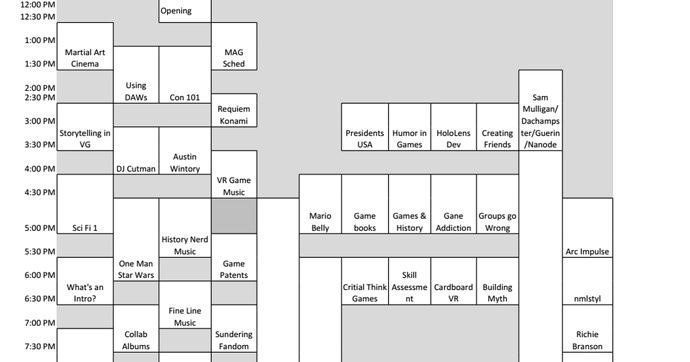 @Axel MAGUnderground is returning again, which mean in case you thought we had enough concerts, we managed to pull more concerts into MAGFest.

@Coldguy
I KNOW. THAT IS WHY I’M FREAKING OUT ABOUT TIME MANAGEMENT.

If there is one thing we prove to the world is why human cloning should exist.

I prefer this one:

Indie tabletop details I may know more than 3 designers on this list.

Ok hype is at max, I will be Gaylord bound tomorrow via carpool and packing finishes tonight. So here is my unofficial stuff you should do at MAGFest to have a good time.

Other things of note:

There you go, I missed a bunch of stuff but that is maximizing on the good shit to do.

The Nidhogg Tournament is at 6:00pm on Thursday.

I may attend. Even if it fills up I’ll probably watch it.

I may attend. Even if it fills up I’ll probably watch it.
[/quote]It is very unlikely to fill up.

Next year, I need to get serious about setting up and running a Bushido Blade tournament at MAGFest. I brought the game last year, and spent a couple hours in the retro-console room, and the game was hugely popular, with tons of people stopping by to play a bit. I’m planning to do the same thing this year.

I request a Rym vs. Jordan O match

OH shit Bushido Blade, was just talking about our games down the shore one of the week of awesome’s playing that game and laughing the whole time.

Bushido Blade is such a fun game to play and even watch. Last year at MAGFest, I had a bunch of people come up curious about the game as they’d never heard of it or seen it before. Even after I’d explained to them that it was a fighting game with “realistic” body damage and one-hit kills, they still didn’t fully understand or appreciate it until they had played a match and where subsequently killed in about half a second. Then, you would see this huge grin appear on their faces and they would laugh and say how awesome the game was, and want to keep playing. I had an absolute blast introducing the game to new players and letting old fans re-experience it.

I would love a modern, version of Bushido Blade with online multiplayer.

I’m definitely going to be in the retro console room with the game if anyone is interested in playing.

Bushido Blade really needs a modern remake. It doesn’t even have to be an official one that is called Bushido Blade. I’ll settle for some indie developer making an homage. If I don’t see one in the PAX Megaboof this year, I will be disappoint.