How do you listen to GeekNights?

As I listen to Geek Nights I keep hearing Rym or Scott saying thing that make it sound like they believe that people listen to only one show a week, or only a few shows based on their interests.

I appreciate that the shows are themed by day, it gives structure to what would otherwise have degenerated into a free for all mishmash.

For me though, I listen to every show, or I at least listen to the openers for every show and occasionally I skip an anime show. Listening to every show has broadened my horizons on a ton of topics and while the deeply technical shows loose me in the details, even then I learn about systems and how humans interact with them.

So does anyone here listen to only one day’s shows, or a combination, but not all the shows that come out? Is there a type of show you skip? Scott and Rym, what does the download statistics tell you?

I doubt most people in this forum listen to the show at all. ^_~

I listen to GeekNights by playing the sound file.

I listen every week even if it’s just to the intro and things of the day.

“Rym and Scott have a show?”
“Good on you guys for finally getting a show going!”
“What’s Geeknights?”
“I haven’t listened in [x] years.”

Who are Rym and Scott?

I listen to most of the shows. It helps pass the time on my drive to and from work, visiting family, friends, the girlfriend, etc.

I listen to Geek Nights on vinyl, whilst relaxing on my black velvet chaise lounge. Sipping a fine bourbon, buck naked.

Unfortunately, I listen to every episode live.

Everything gets autodownloaded into Podkicker and goes into a giant playlist. It’s a mess but it works for me. I listen to every episode, but I listen to ~20 hours of podcasts a week in the background while doing other things, since my ADHD loves it.

It just struck me - I’ve been listening consistently, albeit lately in more of a skip-a-few and then catch up on everything kind of way, since 2006. Goddamn.

I listen to every one, because I can’t be assed to unsub on beyondpod.

I generally just hang outside Rym’s apartment window suspended on a wire, using some super-spy level listening device to hear the episode as they record it.

It just sounds better that way.

My iPhone downloads the episodes automatically and I listen to them a month later. 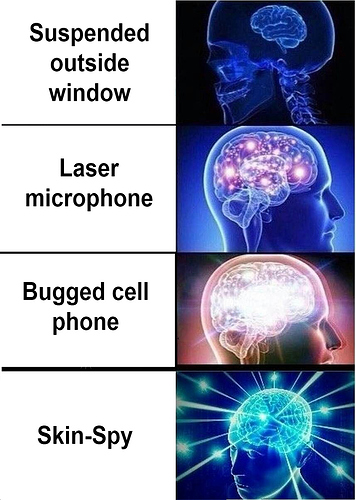 I guess I have to touch Rym’s face now to check his bone structure.

I guess I have to touch Rym’s face now to check his bone structure.

What do you see?

WHAT DO YOU SEE SCOTT?