Hearthstone: Face is the Place

Coulda sworn there was already a specific Hearthstone thread, but a reasonable amount of searching turned up nothing.

M:tG costs money, but not time, so is arguably cheaper. If you're playing constructed, just buy all of the individual cards of the decks you want to make:

Thing I laughed at recently: 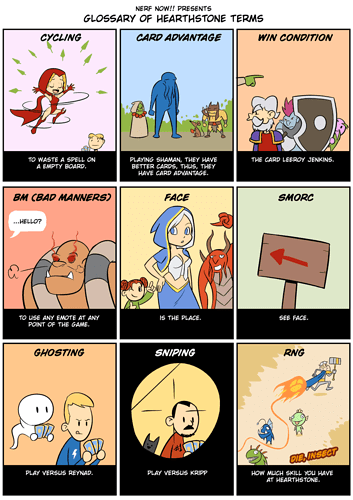 Now, when people say they are cycling their spells to draw their win condition so they can go face, you know what they are talking about.

BIG changes this year for Hearthstone:

A Year of Mammoth Proportions!

Read on to get the full scoop on what’s happening this year.

I like the free dust without having to dust your card when it goes to wild. It’s much better than changing a card and letting you dust it for full value if you so choose.

I like the full expansions instead of the adventures, because more cards. I don’t like it, though, because I really liked the adventures. They are crazy fun. I don’t know if the new single player content will be as good as the old adventures.

Also, this is an obvious money grab since packs make them way more money than adventures. I’ve saved up enough gold for an adventure, but not enough for a full expansion. Having 3 per year will definitely force people to go to the wallet and not just the gold pile.

Three expansions a year will also be good because the meta-game will change much more frequently to keep things fresh.

Nothing said about arena, which I would like to see get some love.

Fuck, they’re getting rid of Power Overwhelming from Standard? There goes my Renolock wincon.

I’ve been saying for a while that they need to pick up the pace on how many sets they push out; Magic does 4 sets a year for their Standard, and M:TG sets are much bigger than Hearthstone sets, which makes the game a bit more dynamic (even if you do end up with Eldrazi Summer and Smuggler’s Copter Winter…)

The comments of reddit say that this is best enjoyed at 1.5 speed. I agree.

Time to journey to Un’Goro

The most momentous scientific expedition in Hearthstone history is about to commence: the Journey to Un’Goro begins on April 6!

Next Thursday. Take a Zelda break to get my dino on.

Oh is it that time?

Cause if so 70+ packs are getting opened at work today.

I’m opening my packs on stream when I get home.

Will I buy more?

So 73 packs and 4 legendaries later, I have 0 quests. I will probably do that quest whatever it is, later tonight if the lag isn’t too bad.

Glad I’ve been hoarding gold and dust. We’ll see how it goes a few hours from now. Look out for my stream.

Got the 1 Legendary I wanted out of 17 Packs: Hunter Quest: The Marsh Queen. Creating 1-Drop Hunter Deck that is really fun thanks to the new cards. Curious to see how Arena plays out post-Ungoro.

I have a strong feeling Mage cards will be nerfed at some point during this expansion because Time Warp is ridiculous.

After playing for a few hours I’m getting the premonition that the Rogue Quest is going to be the evil deck, at least in the short term.

It’s a very easy quest to complete since you only have to do it four times. I saw people just playing Violet Teacher and using Shadowstep and Brewmaster to play it 4 times, leaving behind the apprentices to distract you. There’s nothing you can do to stop this because they don’t leave the key minion on the board to be removed.

Then once they play their quest, they use tiny charge minions like the boar or the pirate, which are now 5/5 charges. They kill you in one shot, GG.

Not sure how to beat this yet. I’m trying to play the Paladin Quest, but it’s too slow and fragile, no matter how fast I try to make it. The quest reward is also much less of a guaranteed instant kill.

I’m really trying for once to just make my own decks, but I’m just not good at that. If I go take some decks from the pros and play, I’ll win a bunch. Maybe I’ll just go back to mage which has much more removal.

I am looking forward to trying to make my own decks again but I also suck at this. I haven’t felt so bad about netdecking in past few months because I never have all the cards, so it’s a fun challenge to figure out what I need to sub in to make it still work.

I popped 64 packs. 5 legendaries but two were Priest quest, in BACK TO BACK PACKS. And I hate priest. But I did get Warlock quest and basically all the Warlock cards so I may try that. Also got Elise and the Mage minion that plays like a phoenix.

Having the star lock after every five levels has got me much more motivated to try to climb the ladder. I’m starting to think the big skill in this game is knowing how to mulligan, which I think I also suck at.

So my legendaries, were 0 quests, priest, hunter and warrior legendary and Elise. I also got boatloads of dust which I used to make hunter quest. Using a half 1 drop deck I made a hunter quest deck. but surprisingly finishing the quest does not really win you the game. I’m saving the rest of the dust until I know who to beat.

I have 7640 dust, which is enough for four legendaries. I’ll be able to get 5 with just a bit more dust.

The ones I really want are the warlock ones, so I can play the discard deck. I also want to play the Priest Deathrattle deck which requires the quest, but also the neutral legendary.

For now I’m not spending. I’m going to wait and see what decks end up being strong and popular.

My feelings after only one night of play is still that the Rogue is the most cancerous non-interactive evil deck, but probably has ways to beat it. The Paladin is still weak, but I have to build a better deck around it.

The Mage is really strong, and I saw the most success with it. Though I might just be seeing more mage wins because I am better at mage than other classes. Also, I was losing to people who have polished decks and strategies no matter what I played, so maybe it’s still not good enough?

My mage deck still needs to have more card draw and also anti-aggro tech so it can get to the late game and actually setup the win condition with the extra turn. I lose games to aggro because I couldn’t contest relatively crappy boards. I also lost games because I didn’t have the arcane giants to go with the completed quest card for the actual win. I think the next thing I’m going to try is elementals. Just playing elementals every turn to activate the synergies and just gain tempo and win boringly. I got the golden bird guy and Ozruk, so I might as well.

I thought Ozruk is bad, and he kinda is because any hard removal, and that’s it. However, if your opponent doesn’t have hard removal, he is ridiculous. I faced one that was a 25 health taunt. I didn’t draw my sheep, so it was GG.

Anyone see the allegations that the card distribution in packs are not fair? Obviously with randomness, someone out there will get an excessive number of duplicates, but some are saying the numbers are more extreme. They are also saying that Blizzard is deleting any such discussions from its official discussion forums.

I think my packs had a good distribution. Anyone else?

I checked in Innkeeper/Hearthpwn and it seemed pretty even between the classes. I did make sure to open my packs as early as possible though in case this happened again (like with Gadgetzan) and be eligible for the “oops” pack gift.

This is probably people dumb enough to think they can trick Blizzard into some free packs.

I agree. However, the exact algorithm and method they use for determining the distribution is private. There is a law about to go into effect in China that forces all companies to disclose this information. Things are going to get very interesting.