GeekNights Tuesday - Race for the Galaxy

Tonight on GeekNights, we review the widely played and well liked Race for the Galaxy! It shares many concepts and design patterns with the classic Puerto Rico. In the news, E3 happened, there are one and a half new Metroid games coming, Nidhogg 2 terrifies us, Blizzard has a two-year exclusivity deal with Twitch, SSDs can burst into flame, Overwatch rankings rankled many players, and Geek Chic kicked the bucket.

I’ve probably said this is my favorite game a few times, and I’m very pleased with the app. Haven’t listened to the episode yet.

We just review the game mechanically. It’s shockingly good at filling its niche, and I want to bring it to the table (expanded) more often next PAX. Good warmup game

I don’t think we’ve ever agreed so much about a game.

The guessing game of choosing roles is the best part - yes!
The language expressed by the symbols is incredibly consistent and intuitive once learned - yes!

Thoughts:
Gathering Storm only adds 18 cards, but the cards it adds open up the strategy space a lot (Improved Logistics and Terraforming Guild are huge)
Takeovers: if you don’t want to lose your uplifts, don’t play 2 cost military windfalls using a Contact Specialist when you’re sitting across from New Sparta ;]

Brink of War is an amazing 2p game, and I love prestige (for search + prestige actions), more takeovers (Interstellar Cassus Belli! Imperium Planet Buster!), and some crazy cards (Psi-Crystal World, Terraforming Engineers, and Pan-Galactic Mediator stand out). I suspect Rym and Scott wouldn’t enjoy it much.

The other expansions don’t mix with the first three expansions, and are very impressive design-wise. They completely re-contextualize the base game’s cards by adding different new cards around them. Alien Artifacts is mostly remembered for the Alien Orb module (which I don’t like and haven’t played much) but the cards are an excellent Gathering Storm-weight experience that is relatively low scoring and a bit less combo-riffic, but adds some more production synergies for genes goods. Xeno Invasion is full of combos, and even changes a base rule so all explores are mix-with-hand, so you can Explore+5 and piece them together.

Please could you say one or two things that terrify you about Nidhogg 2?

Just looking at it makes me slightly nauseous. 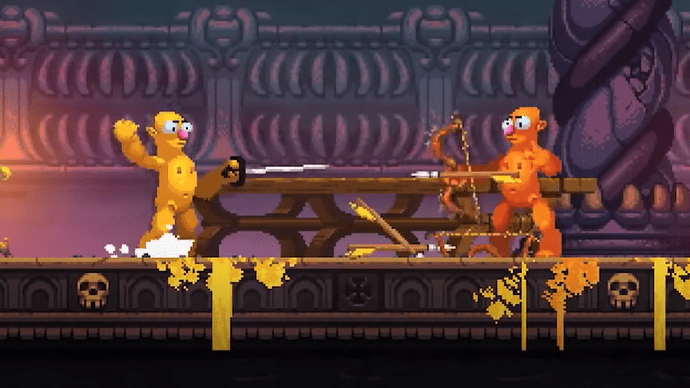 The walking/running animation really makes it look like the controls are loose.

Animations and character models don’t look like they are pixel perfect matches to collision maps (like, say, Super Meat Boy).

Listening to the interview with them, they had a lot of the same kinds of problems that Tarn Adams had with Dwarf Fortress: they don’t have much formal training and are re-inventing a dozen wheels in a naive fashion.

Listening to that interview, I worry they were accidentally successful with Nidhogg 1 and have no idea why it was popular.

They DIDN’T change the few mechanical problems of Nidhogg 1 (the spawning problem), implying that they don’t recognize why it’s a problem.

Lots of glitches imply a rough engine (based on the release schedule, I don’t think that’s an unfair criticism: it’s not that far from release).

It looks like all those garbage knock-off SNES platformers in the 90s.

It apparently plays pretty well, Jeff Gerstmann was saying he really enjoys what they have so far.

I played a ton of it at PAX East and I feel it’s mostly the same with a couple fixes. Bows are allright but if you rush that ass down they aren’t as scary as people make them out to be. Run speed has a slower initial start up and gradually gains speed. Almost all my skill transferred over from the first one to this one so far. I will agree that the I’m not too sure the exact hit boxes on the sprites they use in 2, but that is a problem with all fighting games with them not being exact. My problem with the videos is that the players are garbage and even though I’ve come around to it more, the new art style for the fencers is pretty butt cheeks.

As far as the spawn problem I would need more time than I had to see if I could replicate the cheeky spawn denial that I could do in the first one. And I do agree that some of the maps feel way too big and cause the matches to go on forever if the skill level is roughly the same.

RFTG is a great game, but we totally play it with house rules, because we merge in 3 expansions and that requires extra balancing.
Takeaways:

I don’t think this episode was posted to the Patreon feed. Or my RSS grabber is broke’d.

It wasn’t. It’ll appear there this weekend.

The Impossible Feat Inside your VCR

Check out the shirt Alec is rocking in this one:
https://youtu.be/ZrJmXvxXjD0

Also, if you’re not watching Techmology Connections you are missing out.

I actually came across this as a recommended video from an Oddity Archive video, which is a similar, if much less technical, show.

Check out the shirt Alec is rocking in this one:

I have that shirt.

I have never seen you with that shirt.

I just got it. I almost got another one that had the logo of a particular tape I actually used to use.