Tonight on GeekNights, we review the new hotness we played at PAX Unplugged's First Look, Yusuke Matsumoto's Nokosu Dice. It's a trick taking game like nothing you've ever played before, and we're already obsessed with it. A perfect complement to Wizard, this one is a must-buy!

In the news, Old Man Scott doesn't want you to listen to GeekNights, Fantasy Flight Interactive shuts down, AGDQ was pretty solid this year, Oath is probably going to be good, and Slay the Spire got even better.

Come see us live at PAX South 2020 with an all new panel!

Slay the Spire is half off on steam right now. 12 and a half bucks.

Needed to pause the show and counter Scott’s shit-talk. Genesys isn’t a GURPs or D&D clone. There’s stupid bullshit regarding the game, but it’s a thing where the stupid bullshit is part of what works about the game.

It is a story game, but not a rules-light story game. It exists in the middle space between crunchy, detail everything technical rules (GURPS, D20) and the very free-flowing games (Hungry Ghosts, Apoc Engine). That’s about the same place as D&D5e on rules complexity, but it’s more focused and pointed towards story games. And probably the same place Burning Wheel sits, too.

The complaint? It uses all custom dice that you have to buy from Fantasy Flight. But that’s because they designed the rules to inherently include the ability to swing wilding on the axises of Success Vs Failure, Complications Vs Benefits, and Catastrophe Vs Triumph. And it’s a pain in the ass learning to read that when you’re used to just checking numbers for twenty years.

But you get used to it. And once you do, the dice, the mechanics of the game, push you towards the roll to see what happens. Not just in the “Did you hit?” sense. It focuses on setting boundaries for your creativity to figure out what happened.

And I’m not going to mine for examples. I’ve been running a Genesys game for a year+, and will just point to our AP podcast for hours of examples.

This is the first time I’ve ever heard of anyone ever actually playing a Genesys game.

Do you know anyone playing Star Wars? That games got a much bigger following than Genesys.

But it’s the same system. It’s probable that Genesys was just a side effort compared to the main line for their Star Wars games.

Do you know anyone playing Star Wars?

I know people playing X-Wing and other Star Wars games, but not the RPG.

Strange circles exist in the community. And most people probably just know D&D. Went to a Meet-up thing this past weekend, someone was talking about an Apocalypse Engine game as this new thing he’s looking at.

Hells, most of the time it’s easier to just say I play D&D because it means having to explain less.

Tabletop games tend to be mostly insular, you find your table and start spinning off your own little universes. That makes it hard to peek behind the veil if someone’s not stepping outside and waving their flag on it. I’ve posted about Luckless Fools before in this forum. I’ve talked about the system.

You not hearing it means it’s not wildly successful; they canned the entire RPG division, afterall. But it seems like you generally focus more on board games than RPG’s, if I had to guess based on what you and Rym cover most of the time.

My general gauge re: rpgs is what I see people playing at cons, what I see game designers and industry people talking about, what systems get mentioned in the larger rpg reddits, what systems popular streamers use, etc…

I definitely have my blind spots. (And I didn’t make any assumptions about this system like old man Scott did).

But I’ve never encountered someone until today, here and now, who said directly that they use the Genesys system.

At PAXes and MAGFests, I mostly see (in order of commonality, decreasing at an exponential rate, not counting games I played in myself):

Went to a Meet-up thing this past weekend, someone was talking about an Apocalypse Engine game as this new thing he’s looking at.

This is something I’ve been meaning to do.

Since I moved to the city and all my players didn’t my ttrpg itch hasn’t been being scratched. I know I can find a game of just about anything at a con but I’ve gotta find another insular little group and that’s not gonna happen unless I start playing. Even if this means going into the world of public meetups.

This is something I’ve been meaning to do.

It’s a crapshoot. In a lull a decade ago I started going to the local one, ended up pulling a couple of players back into my group once our other perpetual GM came back to Rochester. Mostly just went to get out more.

That doesn’t surprise me. I checked the Roll20 stats again, and D&D + clones dominate the market… Star Wars is less than a percent of games, and that’s across all systems. And Star Wars is probably one of the easier games to pick up and play.

I think Genesys is probably not popular because it’s not a system with an implied setting. D&D/Pathfinder, there’s enough there in the rules that the setting is implied enough that most people can just let it ride. Genesys and Fate exist in a kind of space like GURPS without any of the world setting books. There’s enough there to show you how to resolve a bunch of different situations, but all the guide rails need to be built before you start gaming.

I played Edge of the Empire for a good bit. The dice system was front-heavy on learning symbols and when to roll what, but because you are looking at symbols representing outcomes with many different combinations influencing story direction it made for a much more narrative system than any d10 or d20 system when it came to player interaction and combat. Also, because the symbols are a shared, viewed outcome for an effort instead of a number vs a hidden DC and each player can narrate their outcome without the DM having to input.

I think FFG did a great job on their Star Wars RPG books and I really liked how they split the 3 core books into entirely separate tones and self-sufficient systems that can cross-over if you want them to (Edge of the Empire for all the non-force, non-empirevsrebellion stuff, Age of Rebellion for all the soldier stuff, Force and Destiny for Hokey religions and ancient weapons).

Do you know anyone playing Star Wars?

I know people playing X-Wing and other Star Wars games, but not the RPG.

I’ve been wanted to run a Genesys Star Wars game for quite a while. Genesys also powers the Android RPG, which may be more in your wheelhouse Scott since you’re a big Netrunner fan.

I’ve played a lot of different systems over the years and Genesys feels like the first system I could run without getting overwhelmed by the crunchy bits and focus on narration.

Genesys also powers the Android RPG, which may be more in your wheelhouse Scott since you’re a big Netrunner fan.

I do know about this, but I’m not at all interested.

The inside is what counts. Some crappy Mega Man board game came out awhile ago. Someone suggested I might be interested because I like Mega Man, and I do. But I could see that the game itself was garbage, so I had no interest.

I just remembered while I was typing that I did play a Star Trek game where you fly ships around a space map. I remember it being OK.

You should have played Artemis with us at MAG. It’s fantastically fun.

When they add the ability to launch fighters from the ship, and the fighters have HOTAS setups, and they play like TIE Fighter, you can call me green leader. Until then, zzzzzz.

Really its what you and your players want to do. I will say this Star Wars as a whole has a much more defined tone than a D&D setting usually does and the 3 books EotE, AoR, and F&D all even further narrow the tone in a way that is instantly accessible to every single player at your table if they have had any Star Wars exposure. Want gritty, possibly not quite friends but in it for a buck noir story-telling: EotE. Want camaraderie in the face of overwhelming odds and maybe some secret spy mission stuff: AoR. Want interior exploration of character and temptation in a good vs evil duology: F&D.Films, Games, books, et al. from the old Expaneded Universe as reference and plunder material for your games.

You are wayyyyy less likely to have table problems where 2 people want to murder hobo it, and one player actually cares about everything and another is there just to try to do whatever wacky-D&D system hijinks they can get away with.

When they add the ability to launch fighters from the ship, and the fighters have HOTAS setups, and they play like TIE Fighter, you can call me green leader. Until then, zzzzzz.

Some of those ships can deploy fighters. And there’s nothing stopping you from controlling them with a joystick, infact I recommend it.

They do not play like TIE Fighter though. They play like weaker and slower (though more maneuverable) versions of the main ship where you play pilot and gunner.

I wonder if Scott’s “like GURPS or D&D” comment was more a dismissal more of “yet another traditional rpg”?

I avoided FFG’ rpg offerings because of the custom dice and because I didn’t want Star Wars and am leery of generic systems. I also hadn’t heard anything especially positive about them.

FFG wants to sell me custom components… what happens when FFG goes away? 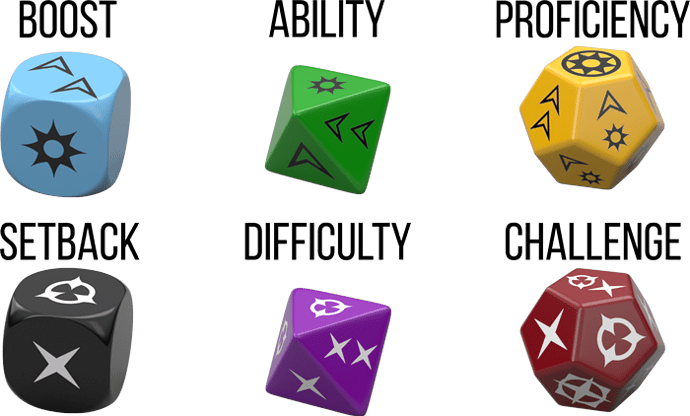 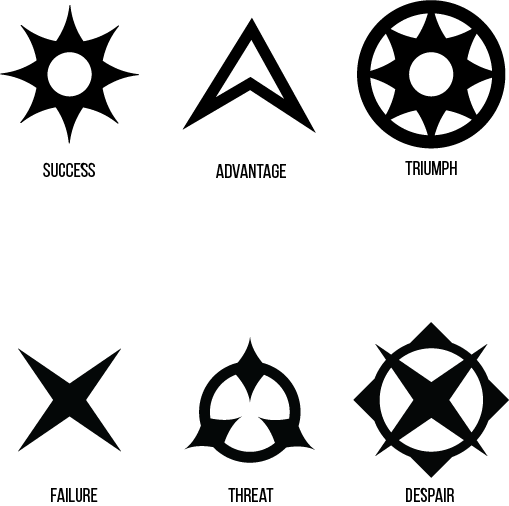 what happens when FFG goes away?

The people holding the hammer over anyone else who wants to make the dice go away and we actually get 3rd party sets? Not 100% sure that would be how it would go, but the question would become “Who’s going to actually sue over it?”