Also never had that problem. And isn’t a racing game the perfect example of when you really need that analog trigger? Acceleration is an analog input, not a digital one. Can you imagine a car that had a gas button instead of a gas pedal?

I feel uneducated. I just use whatever controller came with the system.

@SkeleRym It’s entirely possible your grandfather didn’t have a middle name. Mine didn’t! Just the initial T. It didn’t stand for anything, it was just a T. I don’t know how common that practice was, though.

I knew a kid who had hippie parents who wanted to name him Canyon but knew the kid wouldn’t necessarily like having a hippie name so his first name was the letter C and his middle name was David. He still went by Canyon.

There was a whole episode of the Simpsons about Homer J. Simpson tracking down what the J. stands for. In the end: Jay. He was Homer Jay Simpson all along.

Which reminds of Harry S. Truman. He also only had a middle initial, S, but no name to go with it:

“His parents chose the name Harry after his mother’s brother, Harrison “Harry” Young (1846–1916). While the “S” did not stand for any one name, it was chosen as his middle initial to honor both of his grandfathers, Anderson Shipp Truman and Solomon Young.”

Analogue control for acceleration, sure.

However, in a car your foot is on the pedal while your heel is resting on the floor. You are bracing the weight on the heel, and the heel becomes fixed pivot point, and then the foot is fine to do precise controls.

But a finger on an analogue shoulder button is floating mostly free, three joints out. You need to use the muscles on both sides of the finger, one to pull the finger in, but then muscles on the back to make it not go too far in. The analogue button didn’t have hard enough springs to stop the finger pressing in easily, so you were at all times bracing the finger against itself to put the trigger at the right level of control.

This is VERY different to pushing an analogue thumbstick around with a thumb. There you are resting the weight mostly on the stick, and the movement is under control.

Just imagine if you always had to keep your thumb from pressing down too hard on the thumbstick, or else something would happen that you didn’t want to happen OH RIGHT YOU BOTH COMPLAINED ABOUT THAT IN THIS VERY EPISODE.

Rym and Scott have a lot to say about how huge the XBOX, Dreamcast and Genesis controllers are. Meanwhile, when I go to fly my drones… 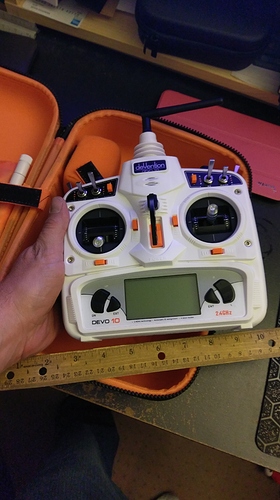 I use to have the 6 button Sega Megadrive controller, specifically for Street Fighter 2. I remember playing that game so much I got a blister on my left thumb from doing quarter-circles, half-circles and dragon punch motions.

These days I just use the keyboard and mouse instead of a controller and if not that the I use the fight stick which is quite a bit of fun even for non-fighting games.

I still think the original Xbox controller was the best controller. Yes it was huge, but it was so comfortable to marathon gaming sessions. The mini replacement gave me hand cramps after an hour.

I’m feeling the siren song of The Legend of Zelda: A Link to the Past and ordered a PS4 controller. It’s supposed to have decent bluetooth support under Linux and macOS.

Just FYI, I’m pretty sure it’s been confirmed that pro controller does work on Windows.

How do you do this?

It just shows up as a directinput Bluetooth controller doesn’t it? I’ll check when I get home and confirm.

So why is the Nintendo Pro better than the Xbox 1 controller that connects easily with bluetooth?

I’m probably not even going to do it since I just use the XBox 360 controllers on PC, and they are very very well supported.

I need some wireless controllers for my living room, sooooo I’m leaning xbox one unless there’s a real good reason to go pro.

I still personally prefer the Dualshock 4 over every other controller out right now. They made so many improvements to that thing over the garbage DS3. I will say the Switch Pro controller is also pretty solid. It’s definitely got a feel more towards left stick and buttons, but since a FPS will probably seldom grace the Switch it makes sense.

Xbox 1 controllers are still bottom tier to me. Which is disappointing since 360 controller was so good. My biggest dislike is just how they changed the resistance in the sticks. To me it makes it so hard to get the precision I want. This is somewhat fixed in the Elite controller but I doubt you want to buy more than one $150 controller.

The Intellivision controller also had two buttons on either side. The nice thing was you could use it with either had.

Apparently charging the PS4 controller is a goddamn mess? You can’t just connect micro usb to usb 2 and plug it into a computer (tried three) or a wall adapter (tried two). It would only charge plugged into my Anker, and that’s a pain in the ass.

Instead I returned it and ordered a dual PS2 controller to usb adapter. Welcome back, wired controllers. This isn’t so bad, as the emulator is running on an old MacBook, so you’re going to want it close anyway.

I gifted my girlfriend a PS4 controller and she doesn’t have any issues, odd.

I just use the PS4 itself to charge the controller, it keeps active charging when in rest mode for a few hours.