I see no reason another game couldn’t be made where the combat happens instantly instead of having you watch DotA guys fight automatically. To its credit, the game keeps you occupied the whole time. Not too much true downtime. You can, and should, use the idle battle time to scout your opponents, shop, manage items, think, etc.

Even with no other changes, most games end after 30 rounds, or 40+ if players are really good. 30 seconds per turn in 30 rounds means a 15 minute game. Even if you add a 5 second break to catch your breath between rounds an insane 50 round game would take 30 minutes. Right now, the average 30 round game is longer than that. Something else to consider is that with a better user interface, the turn timer could be reduced well below 30 seconds.

One thing I do give big credit to AutoChess for that I think it is doing better than any other game I have ever played, is that it snowballs without snowballing. If you are strong early, that does indeed carry forward and help you be strong late due to the HP and econ advantage, but it doesn’t guarantee anything. The only catchup mechanism in the entire game is the slight gold bonus for a losing streak, but winning streaks also get a gold bonus. Meanwhile I have consistently been able to come back to win or place very well in games where I start off VERY poorly.

Just this weekend I played a game where I had the worst luck imaginable. Basically no two start units going into pretty late rounds. Rather than desperately reroll, I held onto my gold and collected interest for as long as possible. When I was down to 4% HP I went all in. I scored big with a two star Enigma and other strong units that resulted in a second place finish. It seems no matter how bad I do, if I hang in there I almost always finish top 3.

if they want to have an actual following on Twitch it needs to be amusing to watch.

if they want to have an actual following on Twitch it needs to be amusing to watch.

I can’t imagine that combat being amusing to watch.

People keep saying this like this. I heard the same argument for why Hearthstone needs to have fancy animations that take too long. It makes logical sense, but it is a base assumption. Where is the evidence? 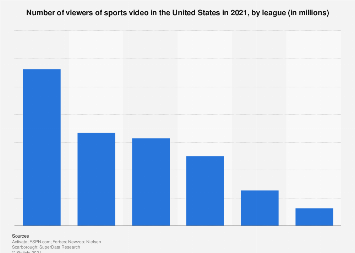 The graph presents a forecast of the number of sport video viewers in the United States in 2021, sorted by league. According to the forecast, video viewership of the National Football League will amount to about 141 million in 2021.

Very strange, there’s a paywall for me now

Here we go, presumably a more reliable source for sports views. Granted this only covers one year but it seems to confirm the general trends Google is implying exist 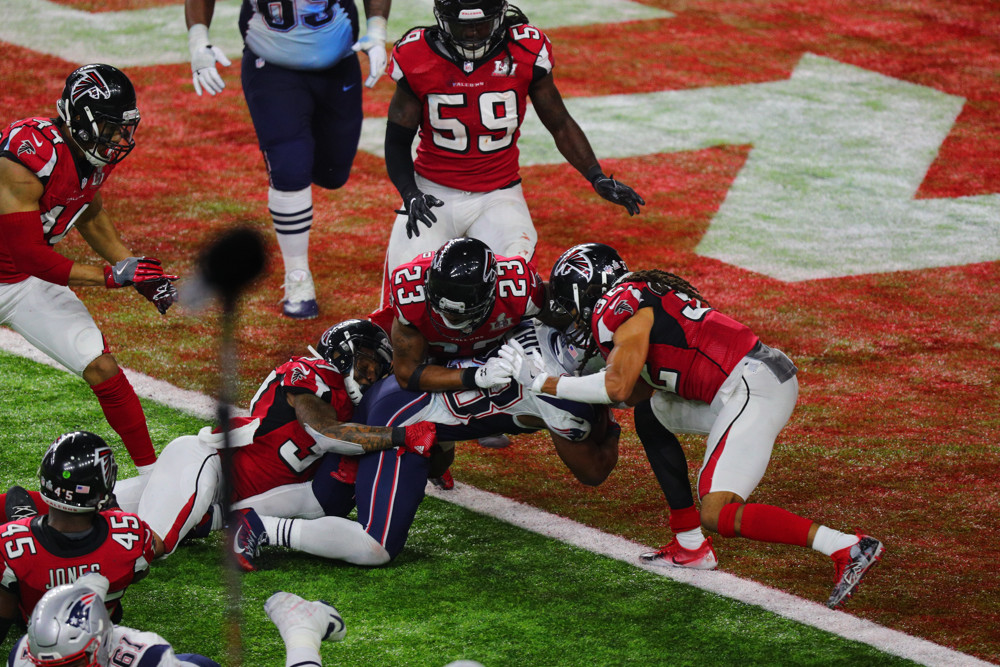 Past the halfway point of 2017, here is a look at the year's most-watched events so far. [caption id="attachment_49924" align="alignnone" 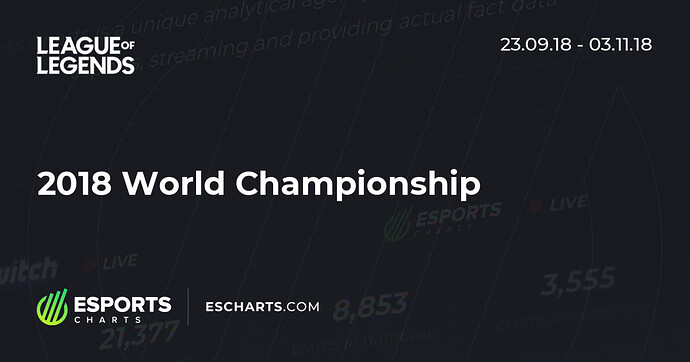 And that puts the LoL world championship from 2018 in the top 5. Of course, that’s only if you include China. I don’t know why they separate them out, because Chinese people are people. Why would they count differently?

Im pretty sure the link i found is only concerned with statistics of American viewrship, otherwise soccer would show up on that list. And as we all know American consumers are the only consumers that matter. 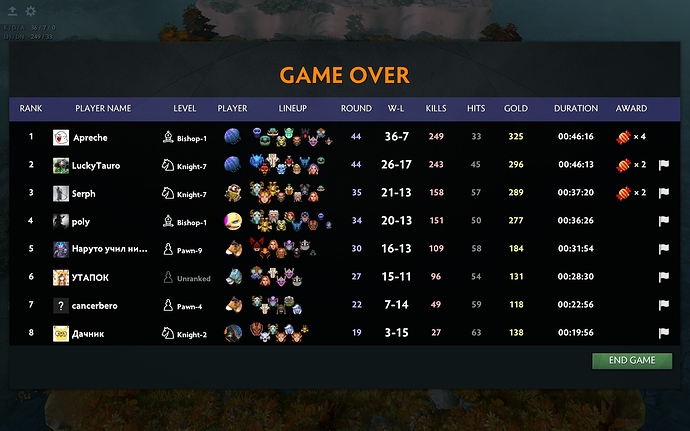 Won again. Now Bishop rank. I only play maybe 5 games a week, and consistently place high and rank up.

Dota 2 Auto Chess developer, Drodostudio announced Monday, April 15, the start of the Alpha testing for the mobile version of the game. The mobile standalone title is made with a Chinese mobile games developer and has no support from Valve, therefore... 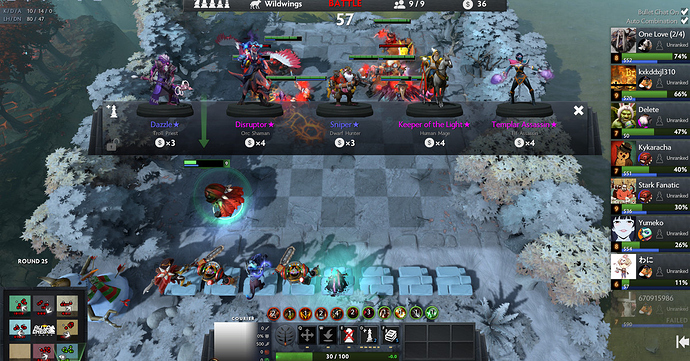 Today’s patch is the last one of this season

Played one game with the new patch new season so far. Everyone is unranked because it’s between seasons. I completely dominated that one game. Also check out the new end game screen. 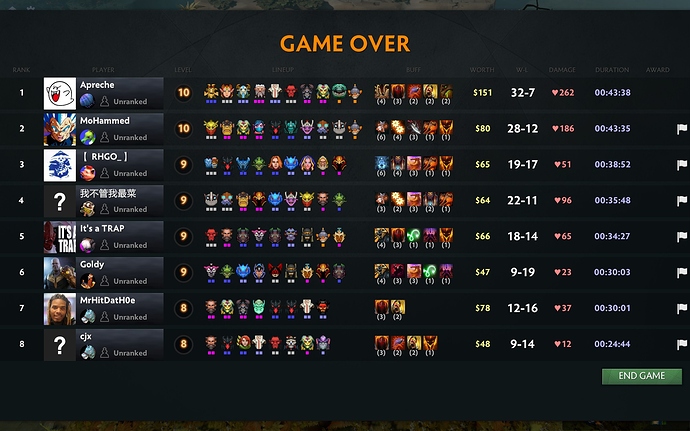 Having “Apreche is now playing DOTA 2” pop up in the corner of my screen is surreal.

Well, once Valve releases their stand-alone version, you won’t see it again.

I just won in the most dominant fashion ever. 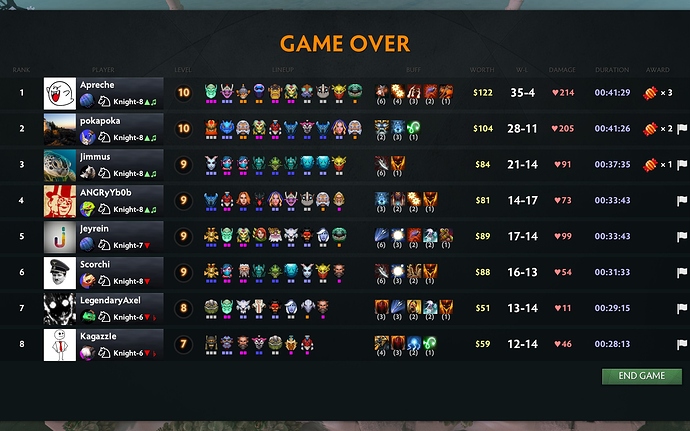 Started off pretty normal with 3 goblins. Then I got a level 2 Chaos Knight, so I went with 3 goblins and 3 knights. I got an early Necro, so I tossed in an Abaddon for the undead bonus. At this point I had some ludicrous winning streak and so much gold. I was going lvl8-9 and other players were two levels behind. Was getting up in the 60-70+ gold and not even needing to spend it because I just kept winning. Only got average items as well.

I eventually dumped the knights to go 6 goblins, 4 mechs, 3 warlocks. Since I was lvl10 first I was able to get that techies and enigma first. The I just high rolled and got the third enigma and the third techies on the same spin. From then on out I just rolled down and upgraded my units. The only comp change I made was late in the game I saw that the second place player was mages, so I got the nagas in there.

When there were just two players left I actually lost 45 health in a single round to the mage player. I just repositioned my units and also rolled timber 3, and that put a stop to that. GG.

i decided to listen to this on a lark, my first episode in like, 5 years, and like…

i missed your voices, guys.

I thought I had maxed out my luck, but nope. RNGesus finds new ways to bless. 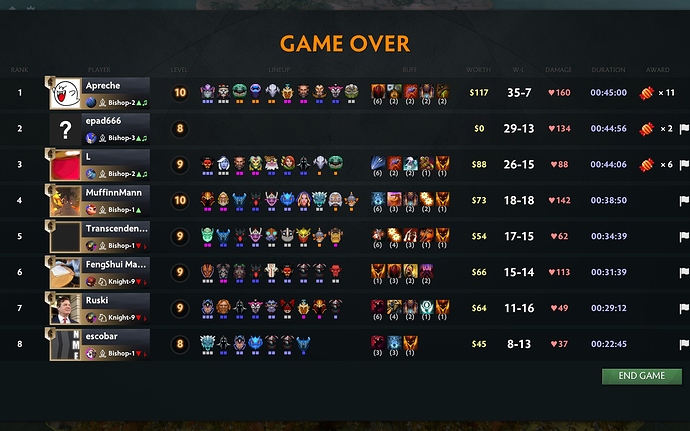 The main component of my RNG was that I went warrior from the start and lucked into the early troll warrior. Then it became a 2* troll warrior rather quickly. I also got slardar 3 and tusk 3 in the mid game. In the end game I two ios. One of them I used to swap out a doom 2 for a sven 2. The other I used to make tidehunter 2. I was about to use it on enigma, but then I just drew the third enigma. In the final round I put mjolnir on my troll warlord and was starting to work towards troll 3.

My final opponent was running the typical 6 assasin, elf, tree, lone druid. They honorably left an empty field on the final round.