When we had Book It! in elementary school my parents forbid me from participating. They believed it was basically bribing kids to read rather than teach them to enjoy reading. They had a point for a lot of kids, sure but my take was I read voraciously anyway and if they were handing out free pizza why not take it?

@Nuri and I own a house in Glenville - technically Glenridge, about half a mile from the Glendaal school.

I can tell you that most pizza in the area is shitty. Dunno about Tony’s in Clifton Park. Pretty much everyone raves about either DeFazio’s, or the I Love over in Troy.

my take was I read voraciously anyway and if they were handing out free pizza why not take it?

Same thing we thought. It was a free lunch in exchange for something I was doing anyway. And the free pizza was a much better prize than whatever random things I got from Accelerated Reader at school. 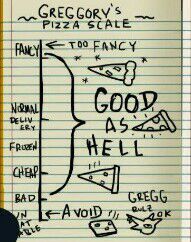 In all honesty I think it also had to do with that my parents (rightly) hated Pizza Hut pizza, but I was a kid who didn’t care, pizza was pizza.

My first solid memory of Pizza were school lunch pizzas and frozen pizzas. There were the Pizza Hut pan pizzas from Book it, in Fourth Grade. My main pizza places were Domino’s and Jerry’s, but to be honest I was more about cheesesteaks than pizzas.

I tend to prefer New York Style, thinner crust and lots of cheese plus a good amount of seasoning in the sauce. Too many places will just use the generic tomato sauce all restaurants use without any seasoning.

I got every one of those damn book it pizzas. I was terrified of my peers who were incapable of doing so.

Same same. The teacher had us still put the stickers on the poster and mine was most of the way across the grid while other kids had five or six maybe. That and the fact that they still sounded out words when we read aloud. That horror only deepened when I got into middle and high school and kids were still sounding out words.

I remember this too. In 4th grade I was the one who broke the week a book a week due to the fact that their pizza was awful and would read without caring. They were upset that I was the one who “didn’t keep it up” denying them free pizza.

When I was going to American school, I read Les Miserables and the teacher was like… I’ll give you credit for 10 books.

It got to the point where she would have me put page counts next to books. That was how I first had American pizza.

That horror only deepened when I got into middle and high school and kids were still sounding out words.

At RIT, when I was an upperclassman, I was required to take a lit class. Despite all my AP tests and all the other lit classes I was able to skip, this one was unskippable. It was like “Literature 2” or some nonsense.

Despite most of the class being English-as-primary-language college students who were accepted by RIT, I would consider the majority of the class to have been sub-literate.

They couldn’t write in complete sentences. I was banned from peer review assignments by the professor after two different students complained about my “harsh” grammatical markup. One of them literally cried over my feedback.

Reading aloud (shocking enough that this was happening in a university course) was the stuff of nightmares. Their vocabularies were shockingly limited.

Meanwhile, in middle school, I submitted a book report for The Hobbit (cheating: I’d already read it years prior), and I was accused of plagiarizing because “there’s no way you read that book.”

Here in the FRC book chronicles thread, I can say that in highschool when we were reading The Odyssey and Julias Caesar out loud. The ridiculous disparity between some students and others was striking.’

I put us into three reading aloud categories.
Infuriating: Sounding out many words with a pause between words.
Tolerable: Only occasionally sounding things out and a monotonous slow reading pace
Me: Reading quickly and with cadence.

It’s not like I’d ever practiced reading out loud I just suspect I was the only one in the class who read Jane Eyre for fun as soon as it was handed to him while the rest of the class had to be dragged through it chapter by chapter over the course of months.

I have this issue with reading out loud where I’m so focused on how I’m reading that I completely ignore what I’m reading.

In other news, when I select a word for formatting, the Android menu obscures the forum toolbar.

I had the same thing happen to me in 7th grade when I did a book report on Shogun. The teacher accused me of just reading the Cliff Notes or whatever and I actually had to get a signed note from my parents proving that they had seen me reading the book.

I’m seeing this again now that I’m back in school. The vocabulary, grammar, spelling, and even just style and construction I see in our discussion board assignments I would find lacking in a middle school kid.

I got the “you couldn’t possibly have read that” line as well. I read like a Goosebumps or a Bruce Coville book or something in second grade and the teacher did not believe I could read it. The Hobbit in middle school is pretty egregious though it’s written as a children’s book.

I never heard of this book thing.

What Book It? It was (is?) a reading initiative sponsored by Pizza Hut where if you read so many books/pages you get free pizza.

Yeah, I figured that out. This is the first I ever heard of it.

I guess not every school participated. It was pretty common in Upstate NY, it was in both of my elementary schools and all my cousins had it in their schools.

I used to read a ton of books, but then I just got bored with it at some point. Only recently have I figured out that I’m just bored with fiction books, I’ve picked up reading a lot of technical knowledge books.