Continuation of this thread from the old Forum

I figure there are probably people like me with geeky shit to sell, so why not sell/trade with each other?

Does anyone want these? Just pay shipping. 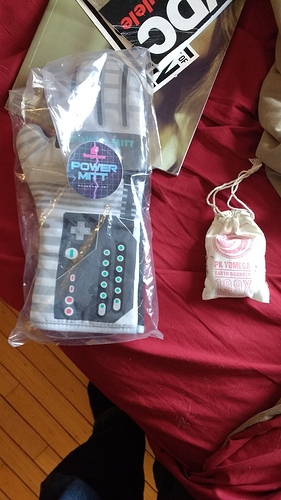 Question - What is the thing on the right? Or is it just the draw-string bag itself?

It’s an Earthbound Yo Yo.

I can take them if you want, I’m right in the Boston area too so shipping won’t be a problem.

Just let me know when you’re usually out and about and I’ll meet you up sometime soon.

At least the kitchen glove, I haven’t use a Yo-yo in ages.

I’d be willing to take that yo-yo off your hands. I put together a Ness halloween costume a few years back but I just got a generic yo-yo so it would be cool to complete it.

DM me your shipping address.

I’m selling some records. People who can come pick them up in person (@HitmanHart, you’re probably interested) get priority over people I have to ship to. If I do have to ship to you, you’ll have to wait a little while I find out demand and how many mailers I need to buy. Here’s the listing:

I’ll look into the list soon, but I’m interested. Seeing as I do live near you iirc. Any reason as to why you’re trimming your collection?

It was bothering me that I had so many records I didn’t care about. I’d like to have a record collection about half the size of what I have now, but care 100% about owning all the records. That’s a ways away, but this is a first step.

My number one priority now is going to be getting rid of all my garbage. I’m going to give this forum first dibs. Then resort to donations/craiglist/eBay to get rid of anything that it would feel wrong to throw in the trash. Here are a few things to start off with:

Still got the Nvidia 680. I think someone already wanted it in another thread? This is it. Used, but still functioning perfectly (to my knowledge).

Also have this keyboard. Used, dirty, but functioning just as well as it was when it was new.

How much do you want for the keyboard? I was going to buy a keyboard with numpad for work and take my currentl 10keyless home, so this is fortuitious timing.

/shrug. Shipping plus a few dollars? I just want to get this stuff out of my apartment to make room without feeling bad about throwing away perfectly good stuff. Minor profits will be going towards buying new furniture.

I have previously expressed interest in the 680 previously as I have a computer in use with a very very old video card in it. I will pay for shipping plus a few dollars that said this is just convenient for me. Someone with a greater need should get it first.

Any takers just use Forum DMs to get the details. Google Wallet is best for payment, but I also have Paypal/Venmo/etc.

Funny you should mention this, I prefer google wallet as well as it doesn’t charge for nothing like paypal and venmo do. I’ll hit ya up.

Unless any of these are secretly valuable and worth the hassle of selling online, I just want to get them out of my apartment.

ReadyNAS NV+ with 4x2TB drives in it. Very used. Very dusty. Has a replacement 3rd party PSU in it. Still works. Asking at most $200 + shipping.

It’s going to be quite heavy to ship, so in-person exchange is much better for this one.

Also, it will take me some time to back it up, erase it, and reset it, so I can’t deliver immediately.

So I have this huge stack (4 spindles) of blank DVDs. They have been there since the beacon days. Should I just toss them, or is there someone out there who can make use of them?

I am somehow shocked you own Tanto Cuore.