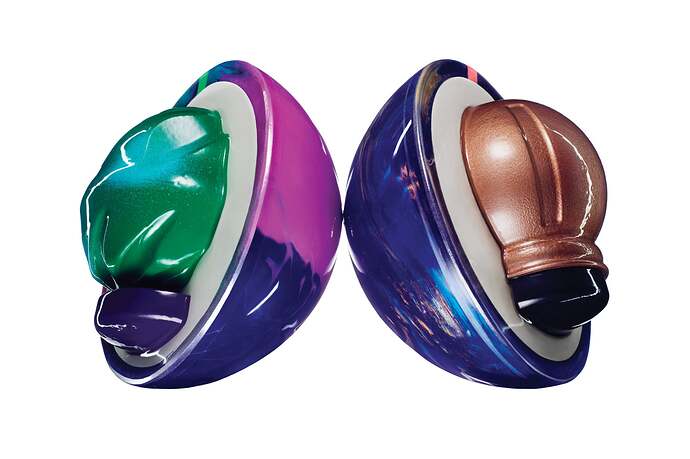 The insides of pro bowling balls will make your head spin

The weird anatomy of pro bowling balls, exposed on camera. You'll never look at the pastime the same way again.

I’m all for advances in sporting equipment and technology. But to me, this goes beyond even the realm of the Nike Vaporfly running shoes or the Speedo LZR Racer.

Probably all the pro bowlers have access to these balls. So at least the playing field is even-ish. But seeing this definitely lowers my respect for the skill of the pro bowler, and the sport of bowling as a whole. For competetive integrity they should provide a standard perfectly uniform ball to all bowlers, allowing to customize only for size, weight, and holes to suit the bowler’s hand and arm strength.

Then again, if they actually wanted to make bowling a skill game, the pros would all play candlepin instead. 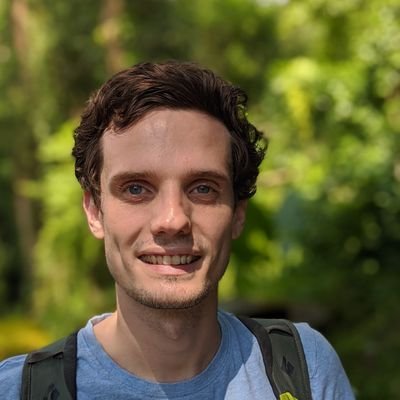 @matthen2
take a vertical row of pixels from a video, and stack them to make a still image- here we can measure the frequency of the blinking light, and also pick up scans of the cars that drive by https://t.co/GGnRNKJ8XO
Apreche December 3, 2021, 3:05pm #224

Oh yeah. That’s one of those things I knew, but forgot I knew.

THEY FIXED THE SPORT 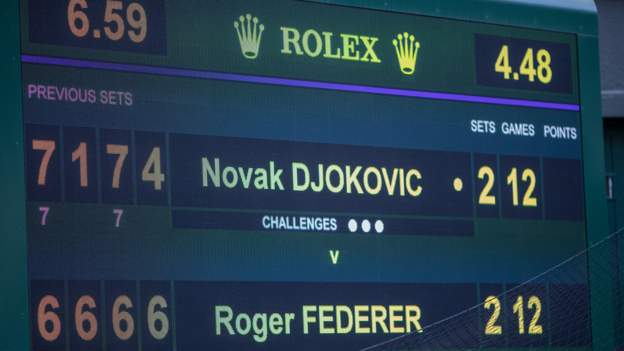 All four Grand Slams will use a 10-point final set tie-break, starting at the French Open in May.

It’s been suggested in the past but it’s happening for real. 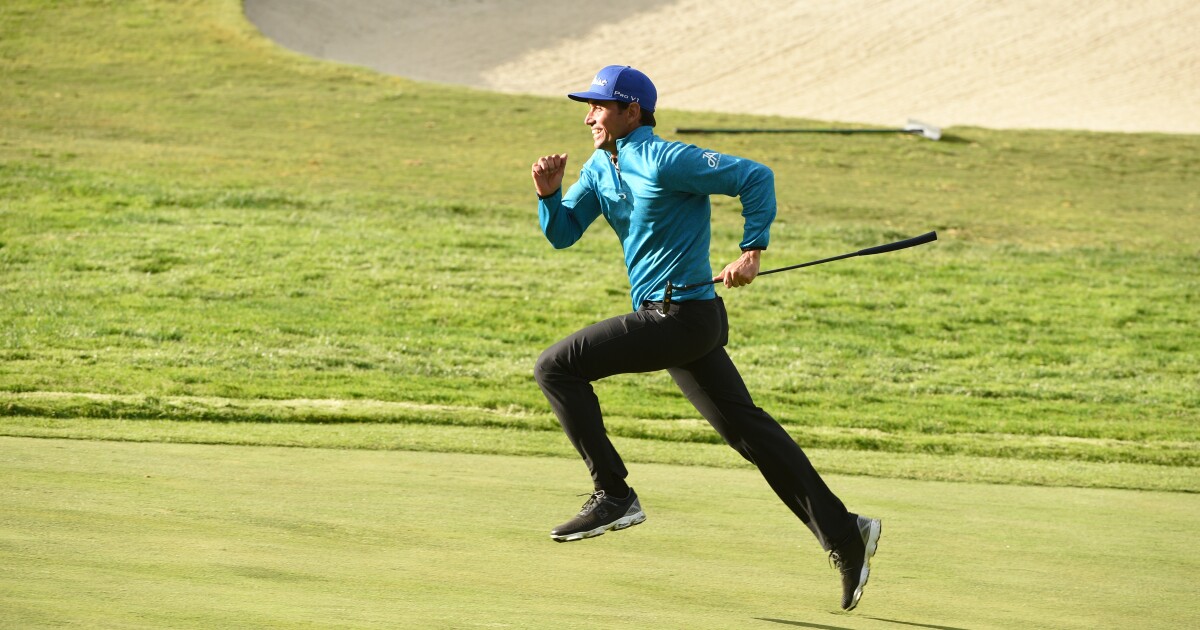 Book excerpt: Speedgolf is a combination of running while playing golf. 'We took golf and made it into a sport,' says one champion. Author Rick Reilly disagrees.

Rick Reilly, now there’s a byline that was kind of a shocker to see.

Funny what we got, and got wrong discussing it two years ago:

A thought inspired by this: https://youtube.com/watch?v=_XkKufyIiAY Golf speedrun IRL. Strokes doesn’t matter, just time. Say you don’t get a caddy, and instead of stroke penalties you take 30/60 second delays. Taking fewer shots is going to mean faster time, but your overall time is going to be dominated by how long it takes you to run that far. Take Augusta for example. The course is 7,475 yards, or 4 miles and change. What clubs do you take? I’d say maybe a 5 wood and 9 iron? Drive and p… 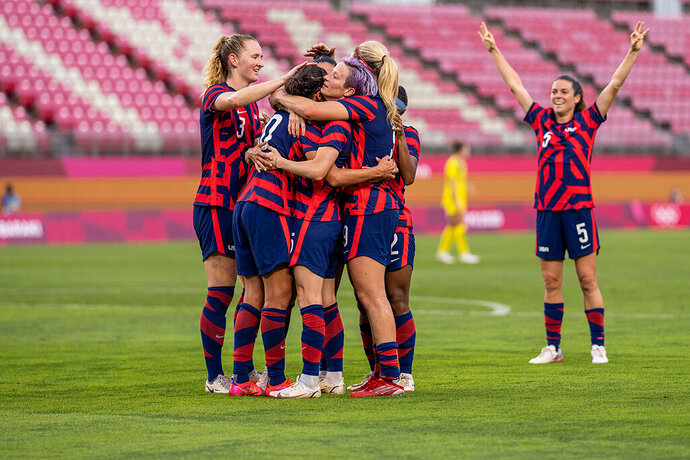 Landmark labor agreements with members of the men’s and women’s national teams will include higher paychecks and shared World Cup prize money.

When teams get to the World Cup FIFA pays. FIFA pays men much more than women. The US teams have agreed to pool the money that comes from FIFA and divide it evenly. It’s only appropriate since our women’s team are champs and US men are mediocre.

I don’t know much about speed cubing other than it’s a thing. Saw this video today. I was expecting it to be one of those community flamewar deals. Obviously I wouldn’t be sharing it if that was the case. 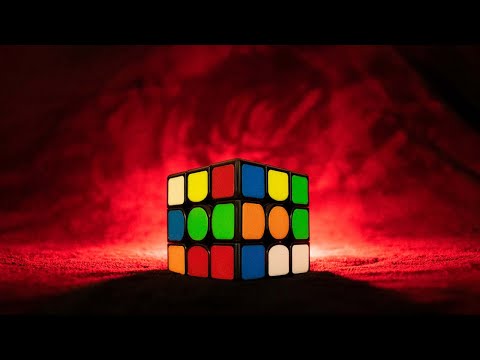 I 100% agree with the video. The current rules of speed cubing are that you get a maximum of 15 seconds of inspection time. You can’t go over that, but you can go under. There is no benefit how far you go under. You might as well use the full 15 seconds, even if you don’t need it all. The entire competition is based on just the physical manipulation time.

IMHO the inspection skill is just as difficult, if not even moreso, than the physical execution skill. Both should be rewarded. The video is on the right track suggesting that the Red Bull one-handed no-inspection competition is a good way to fix things.

I also believe that there is conceivably some way to make a competition in which only the inspection time is measured, and not the execution time. This would make cubing accessible to people who have the mental capacity to see and solve the cube quickly, but are unable to physically manipulate it quickly (or at all).

I’ve found the story of sports climbing in the Olympics quite fascinating. There are three different kinds of climbing, and in Tokyo there was a single medal for all three combined, which made nobody happy, except that someone could win a medal in climbing.

Now speed climbing has its own medal, but that means bouldering and lead still have to have a combined medal. Which is less bad, but still not what should happen: three medals.

First test of the new format seems to have gone okay though. 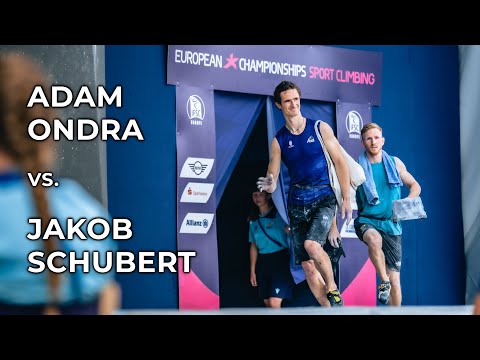 I can see having bouldering and lead being combined, but as you say, it’s not great.

There’s transferable skills there but competition bouldering has really gotten away from the same sort of climbing that lead is. You’re not going to be doing all those crazy dynos on a lead wall.

No, there are still three walls. But after all the individual events, there are new routes set on the bouldering and lead walls, and the combined is a new competition. Nobody is doing bouldering on the lead wall.

That’s not quite what I meant.

To try and clarify, I would prefer that the lead and bouldering be more separate competitions. While the skills used in both are similar, you’re climbing a wall, they differ in the exact methods and skills used to scale those walls.
Dynos being something that you can train in that will help you a great deal on the bouldering is something you won’t find often on a lead wall. And conversely the skills for lead climbing, the endurance and more static methods for climbing, can work for bouldering but won’t help you nearly as much as more bouldering focused skills.

No where did I intend to give anyone the impression that I thought that you’d be trying to boulder on a lead wall, or visa versa.

In that case you are just repeating what I said and what the video said: everyone thinks they should be separate competitions.

But the Olympics is only allowing two medals for sports climbing in Paris, so the best split is speed climbing for one medal and combined bouldering and lead for the other medal. This was the first test of the combined event.

A Safety in football should be worth between 9 and 11 points (I’m open on this part), instead of only 2 points.

Safeties are harder to pull off than a touchdown or a field goal. In all other sports, the thing that is harder and rarer is worth more points. A Grand Slam is harder and rarer than a Home Run. A Three Point Shot is more difficult than a normal shot.

Giving a team only 2 points for a Safety is like Steph Curry hitting a half-court shot and only giving him 1 point.

This is very true. The points rewards for a lot of sports are not commensurate with the difficulty of scoring. People often suggest scaling the scoring appropriately, but it is extremely controversial. The main problem is that changing the scoring will also change how the game is played.

The three point shot in basketball was, and in some circles still is, very controversial. Nobody thinks that scoring from beyond half court is as easy as a layup, and is thus only worthy of the same score. They are worried that if half court shots are worth 4+ points that players will keep attempting them. For a spectator sport they want to incentivize exciting entertaining play more than they want to emphasize difficult play. Difficult things aren’t necessarily the most exciting. Dunking over someone’s head for 2 is usually more thrilling than a wide open 3 pointer. Some people just don’t want to watch players shoot threes.

And so it goes with handegg. You don’t see many safeties not only because they are difficult, but because they are only worth 2 points. If they were worth 9 points you would see teams stop trying to go for the first down when they are pinned in their own end, and opt to punt instead. Less excitement.

I guess it’s also worth mentioning that if you score the 2 point safety you also get the ball back. Right? So a safety also comes with the reward of a turnover in addition to the reward of 2 points. That counts for something. If the safety is going to be worth 9, then the team that gave up the safety should keep the ball.

One thing I definitely think should happen that soccer fans will hate. Even if soccer refs start properly calling diving and such, goals on penalty kicks should still be worth less than goals in the normal course of play.

Apparently, I am not the first person to come up with this idea: 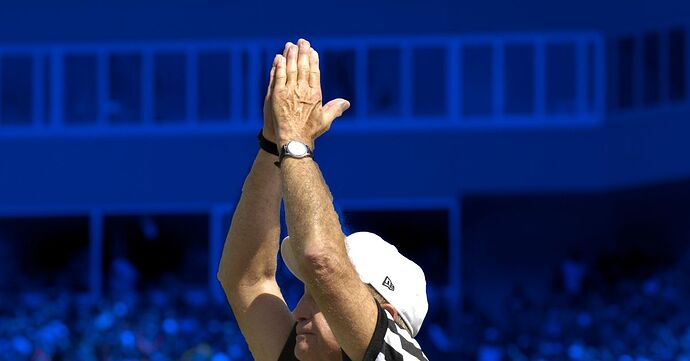 Bad Idea Time: Safeties should be worth 11 points

Make football’s rarest scoring play its most valuable, and let the ensuing chaos overtake everything.

The author of that article, who knows much more about football than I ever will, argues that even taking into consideration that the team that scores the Safety gets the ball back, it’s still undervalued.

Also, the author makes some pretty good arguments as to why making a Safety be worth 11 points will make football MORE exciting, not less.

I hadn’t considered the shenanigans of intentionally not going into the endzone so you can turn the ball over on downs on the 1 yard line to go for a safety.

On the one hand, that’s a shenanigan, and a good argument against this rule change. On the other hand, football already is loaded with those kinds of shenanigans, and they are arguably best thing about football.

We already have players intentionally not going into the endzone for a touchdown because they want to run more time off the clock before turning the ball over to the other team. This is right in line with that.

MLB taking some more small steps to fix itself next season. 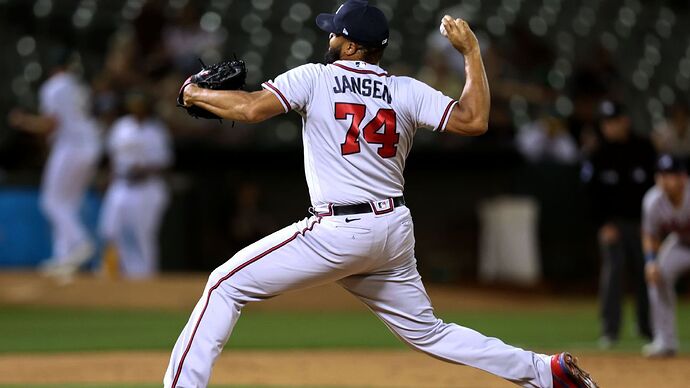 A 15-second pitch clock? The end of the shift? What you need to know about...

Major League Baseball is shaking up the way the game is played starting next season. We break down how the changes will impact the sport.

Really, one of the best things MLB can do to increase popularity is make the broadcast more exciting. Somehow, the Mets broadcasters at SNY are at the absolute forefront. They intentionally removed a commercial break, losing actual money, to do give the closer a cinematic hype entrance like it’s pro wrestling. They even crop to a wider aspect ratio for effect. 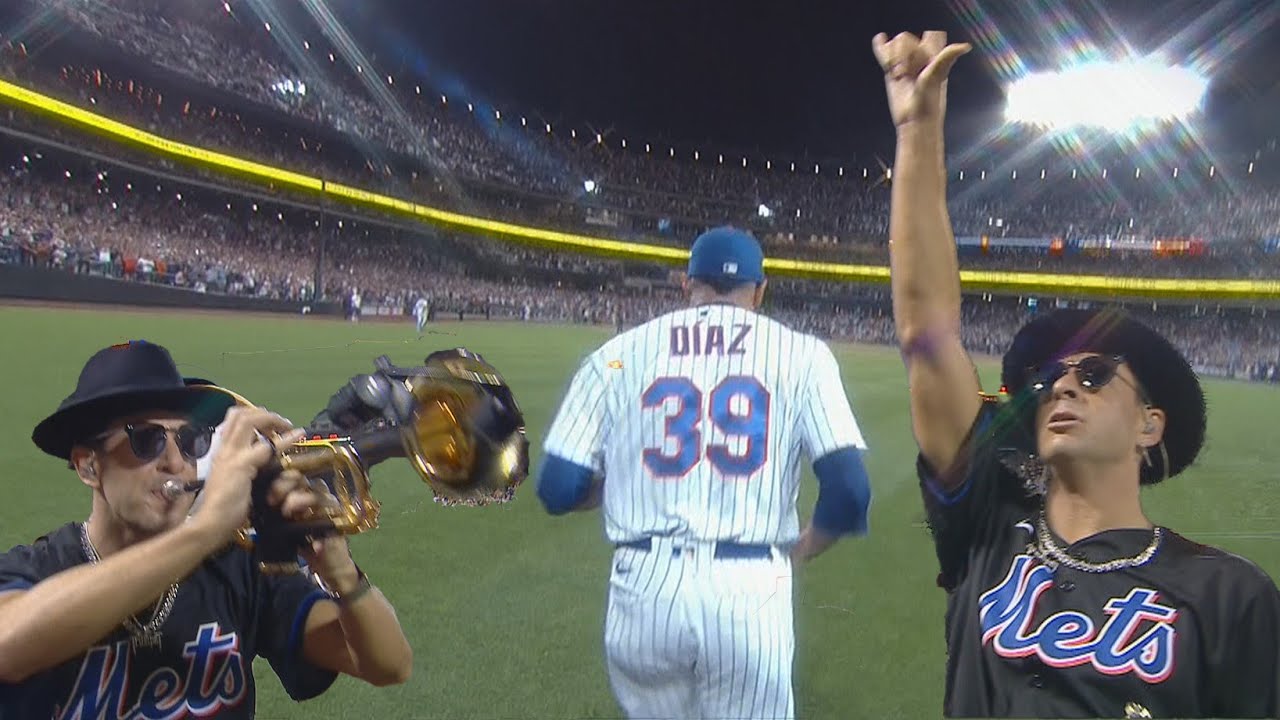 How would pro athletes fix their own sport? 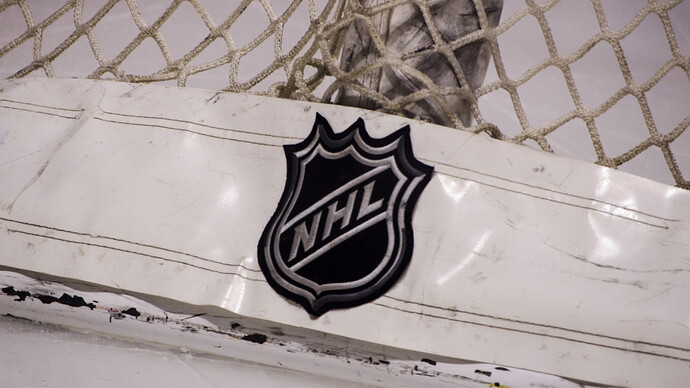 NHL players gave ESPN some of their suggestions on how to improve the NHL rulebook.

Not too different from the suggestions of fans and the media.