A few weeks ago the European Tour channel posted a mini-hole-in-one challenge: 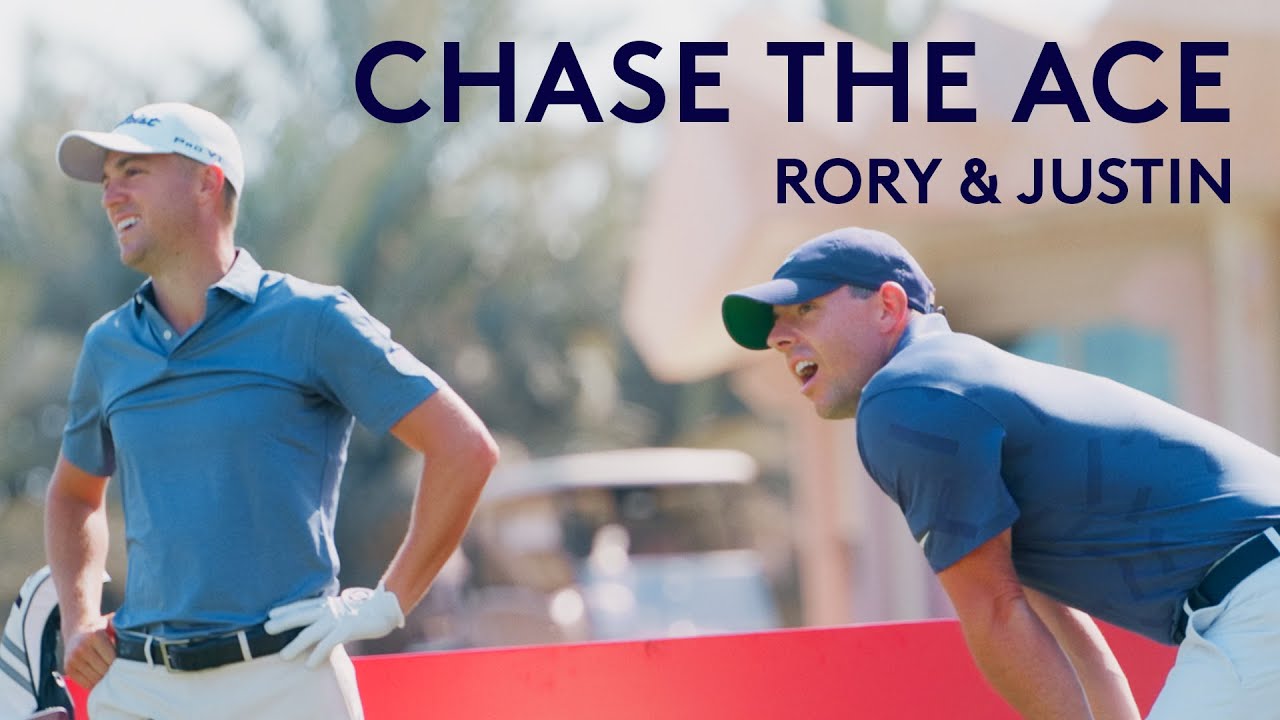 This is a shortened version of the 500 ball challenge series, which I find fascinating. It shortcuts the brains of golfers who would be over the moon happy with these shots, but due to not being able to putt the ball from 6 inches to birdie the hole, they break down in despair.

These are the best ones, and good to watch in this order: 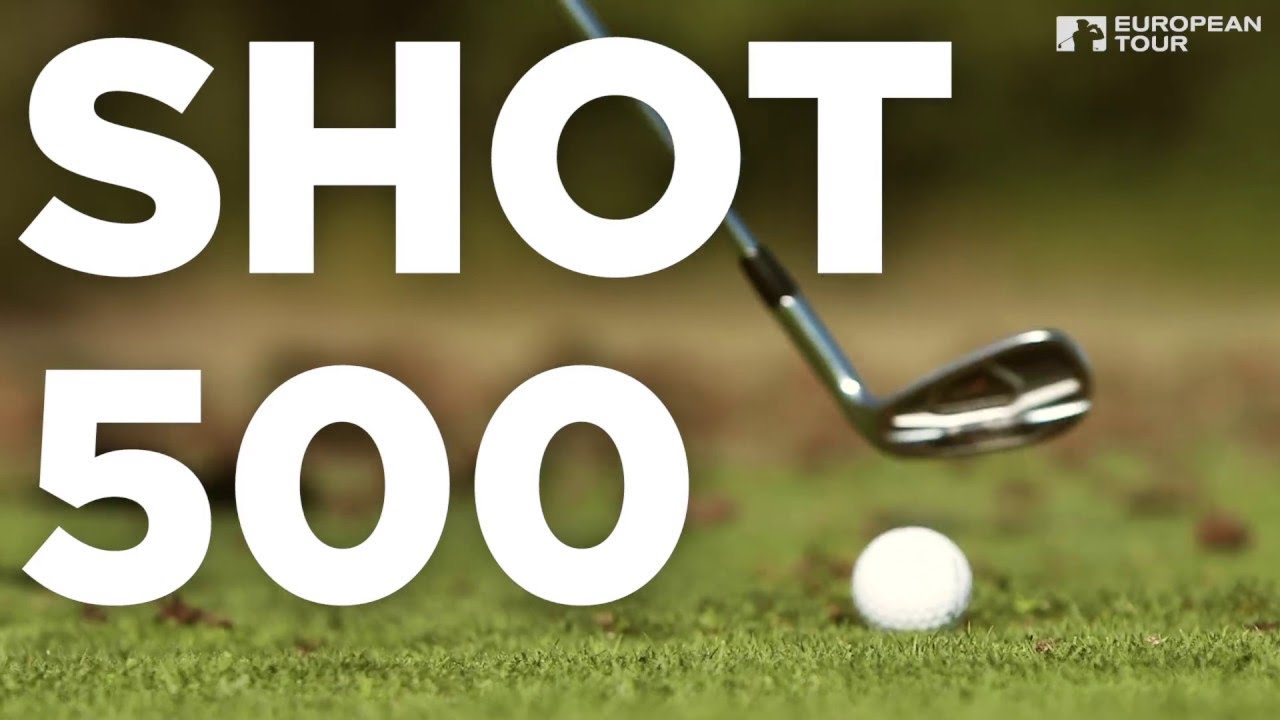 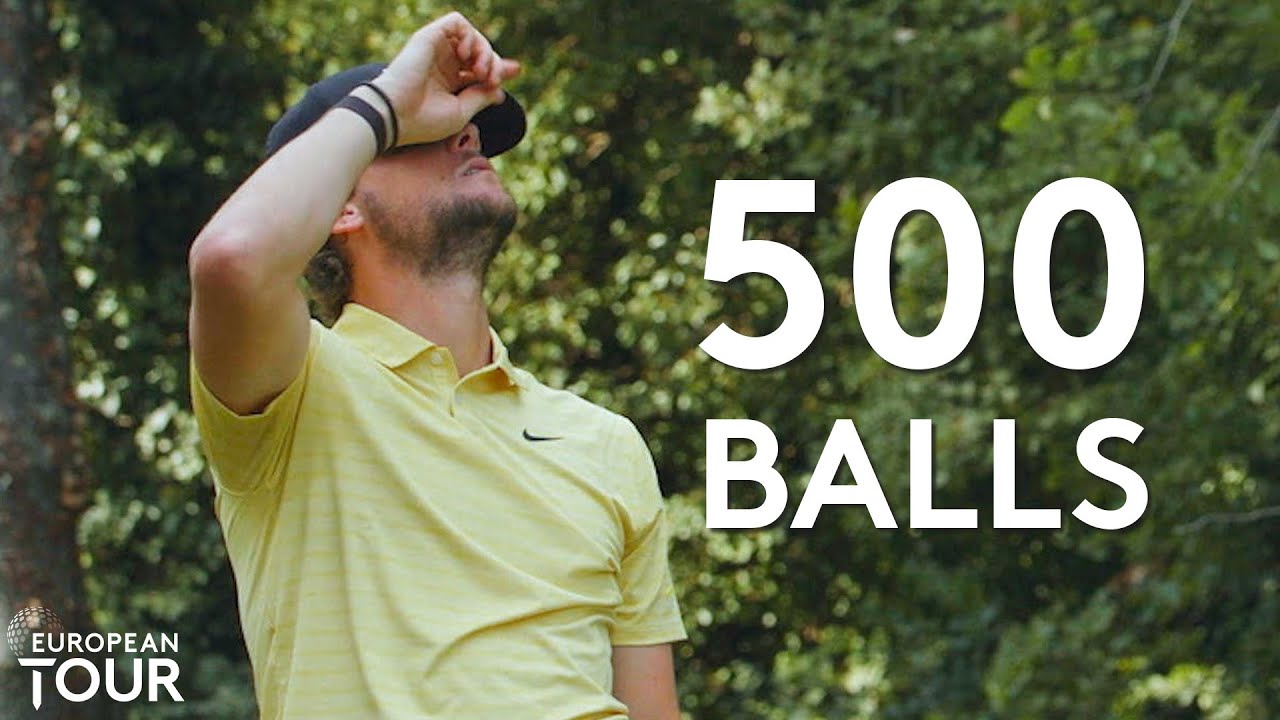 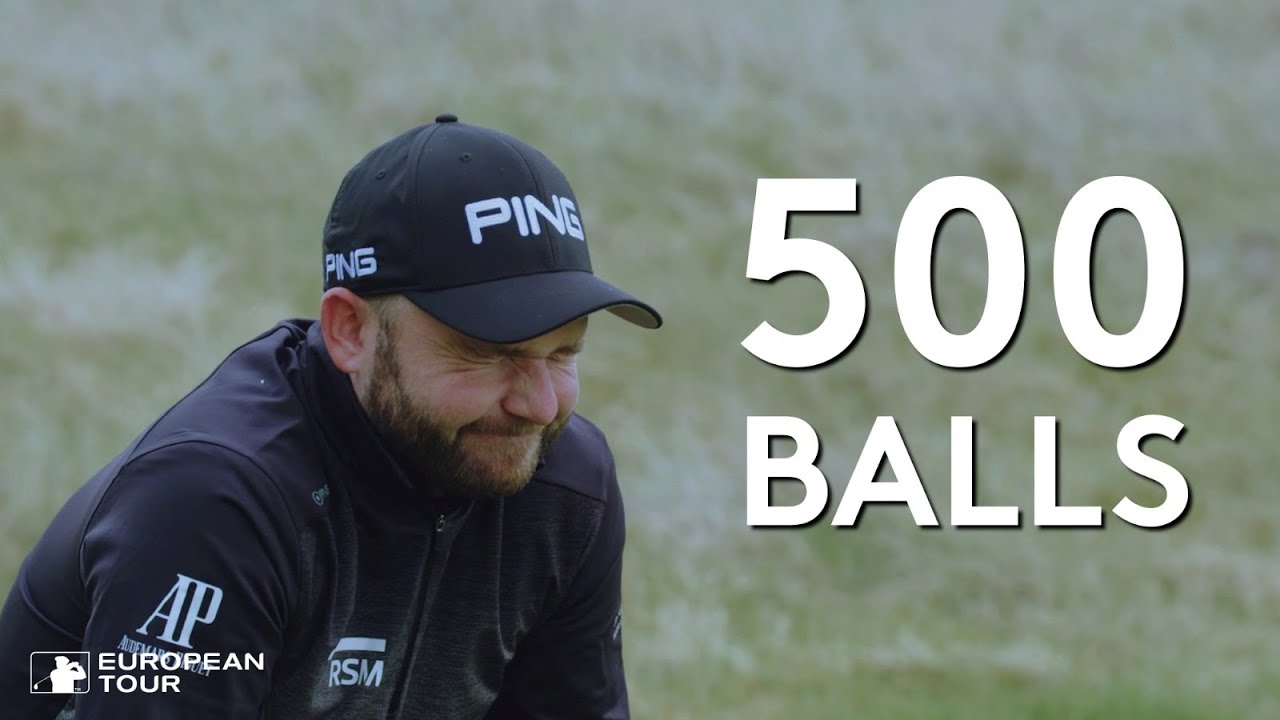 I’d love this to be an ongoing event for all the top golfers. I know it’s based soooo much on randomness, but there’s a year-long competition format here somewhere.

An interesting concept, a la the 3-point competition in the NBA All-Star Game or the home run derby in the MLB All-Star game. I think it’d be interesting as an ongoing competition if the hole were oversized some amount, maybe 150%? That way it is less about getting that one perfect shot / lucky bounce and more about being able to do it repeatedly. Imagining final scores out of 50 shots would be something like 7 to 5.

It is kind of amusing watching these golfers totally meltdown as they repeatedly make great shots in any other circumstance, but keep missing by inches.

I can’t even imagine how frustrating that must be.

Nope, you are going in the wrong direction. I want each golfer to have to do five days like this throughout the year. At the end of the year, most golfers will have zero aces after 2,500 shots. The winning score should be one or two, with the tie break being who got their first hole in on earlier in their attempts.

It means that in the last day of attempting it, you could be behind by one but know you can still win if you sink two in one day.

It would be fun, but I’d think you would have a lot of people tied for first and second place. We need a tiebreaking factor. Maybe put a radius around the hole and any shots that end in the radius are 1 point. But in the hole is 100 points. So the close shots are just a tiebreaker, you can’t win with them.

That is sort of how old CTF games worked in the Quake era to balance “caps” and “frags.”

You got one point every time you killed someone, for both yourself and your team.

Everyone on the team got 10 points for themselves and the team if anyone captured the flag.

So in an 8v8, it’s 1 point per kill and 80 points per cap. The more players there are, the harder it is to cap, so the more points it’s worth relative to a kill.

I just don’t think that the reason someone gets it in the hole is 100% skill. You can have two very similarly skilled players and the one who gets it in the hole is not significantly more likely to be the more skilled player. There is so much chance or minute variation that is not a result of training, concentration, and deliberate swing mechanics. A gust of wind, a slight inconsistency in the green surface, etc… I don’t think that a single success is a measure of skill. A small pattern of success is a better measure of skill, IMO. If the player is getting it into the hole once because of skill they should be able to do it again within a very few number of attempts. They cannot, so I do not believe that the one success can be claimed to be 100% skill-based, highly correlated with skill yes.

Who said it was 100% based on skill? I never claimed that, and that’s the opposite of why I find such a challenge interesting. I want these professional players to be tortured mentally. The chances are good that among 20 players doing 5 days of 500 balls per day, there could be a 20-way tie for 20th place. But who knows… maybe with high enough prize money, you could get 20 players to take part. Live stream every attempt on Twitch or similar, and you could have an amazing or ludicrously dull sporting competition. Who knows.

The base skill to be included in the competition is high, but only accounts for 1% of the outcome. Luck is then the remaining 99%, but over 2,500 balls each, we might be able to tease out the 1% skill.

For reference: The Best Game You Can Name (Ice Hockey) - #478 by Apreche

How to fix officiating in ice hockey (or other sports) when we don’t (yet) have the technology for a computer to call the penalties perfectly?

I say that a big pro sports league like the NHL has so much money at their disposal. If there are 10 players on the ice (not counting goaltenders) have 10 camera operators and 10 officials in a booth watching each player the entire game. At any time one of the officials can press a button to call a penalty on a player. No problems with things happening behind the back of the ref on the ice. No problems with the ref on the ice having a bad angle. Just expend the huge and ridiculous amount of resources necessary to get it right. You can afford it.

There are already goal judges in place, so they can do double duty and watch the goaltender in the rare instance they commit a penalty.

I’d be much more likely to watch Baseball if there was a two hour limit and the batter wasn’t allowed to step out of the box. 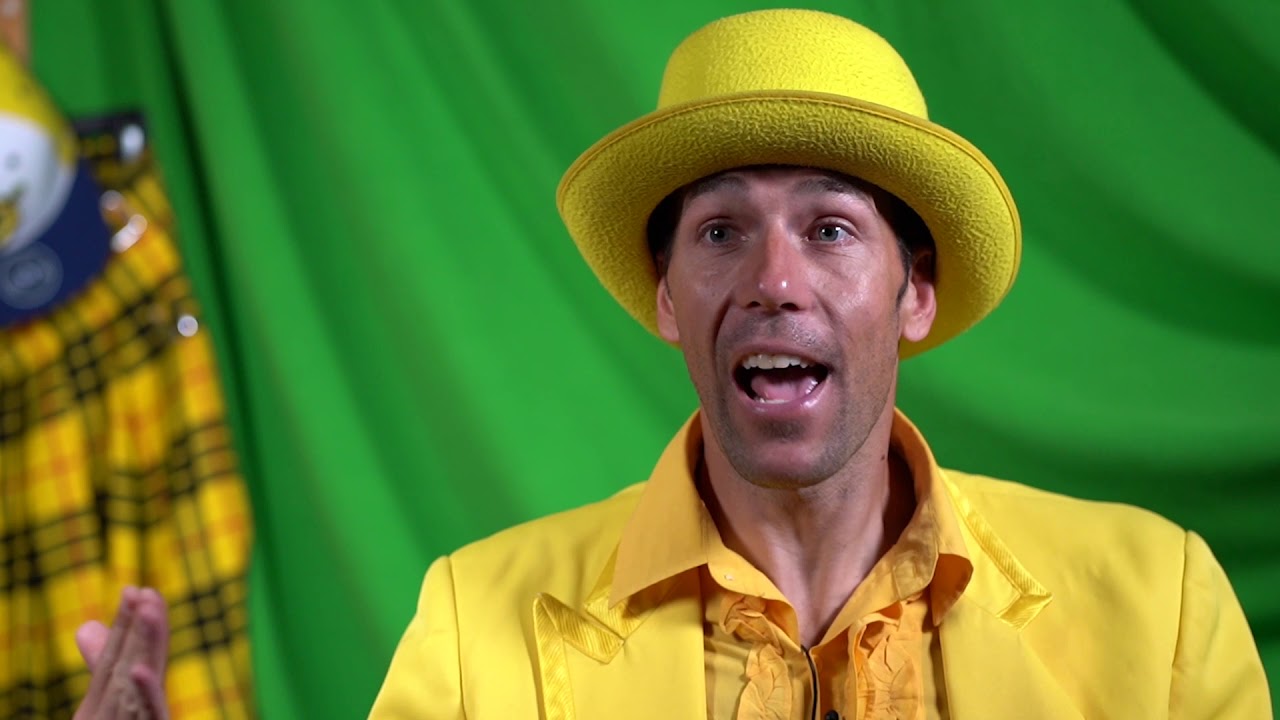 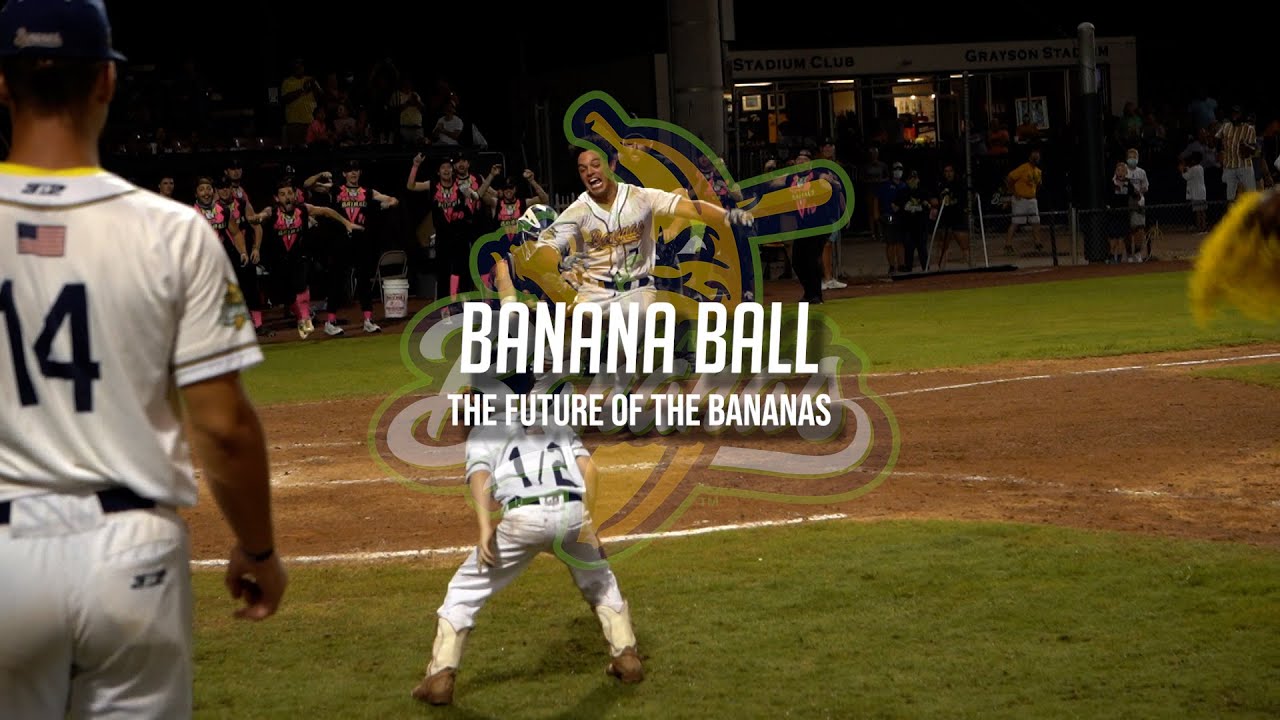 A few months ago I mentioned that in tennis, the lines on the court are now just a guide for the players, and the truth about if a ball is in or out now exists only in the computer:

It used to be that the LINES ON THE COURT were the actual dividing lines between “in” calls and “out” calls. If the line judge decided a ball was out, they made the call. This could be overruled by the chair umpire. And if either player disagreed, they could appeal to the Hawkeye system, but only three incorrect appeals per set. So you have four sets of eyes on the ball as it touches or misses a line.

But now the COMPUTER MODEL is the source of truth. There’s nothing else. 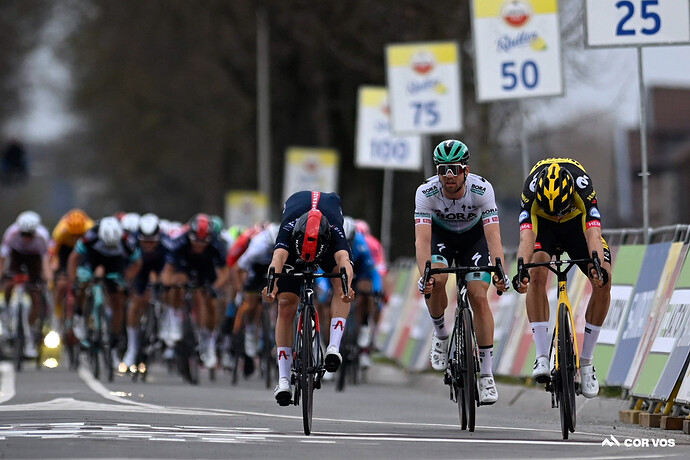 Making sense of the controversial photo-finish at Amstel Gold - CyclingTips

'What's the deal with that photo finish?', and other important questions.

This is the guide from the UCI on where to place the camera, and it’s IN FRONT of the finish line, which makes sense because you want a white background to see the tires. 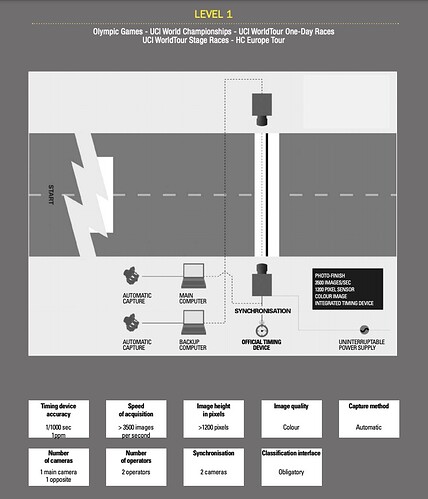 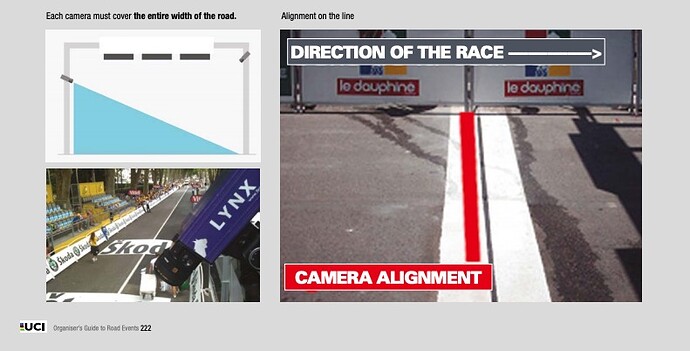 From the photo finish image you can deduce how far from the finish line the camera was placed… a in this case a good few centimeters in front of the line. 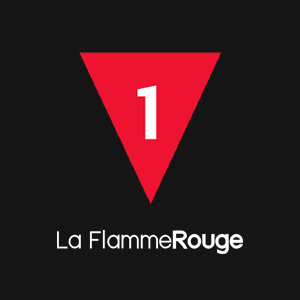 From this perspective it looks like they decided to setup the photo finish quite far from the entry of the black line #AGR21 https://t.co/DKCxEkhUnt 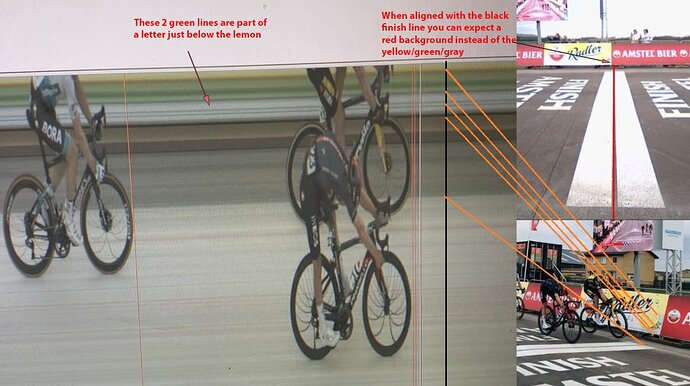 The conclusion is quite clear:

“So is the finish line the white line or the black line in the middle of it? The answer, in fact, is that it is neither.

The black line is a visual approximation of the placement of the finish, but the image from the photo finish camera is the true arbiter of the result – not the other way around. It’s technical and it’s a bit confusing, but it’s clear-cut and the riders and officials are playing the same game with the same known set of rules.

“The finish occurs at the instant that the tyre of the front wheel meets the vertical plane rising from the starting edge of the finishing line. To this end, the verdict of the photo finish shall be final,” says section 1.2.100 on page 41 of the UCI regulations.

That photo finish is not a potentially flawed visual representation of who won, but the unequivocal determinant of it. The rider who wins the photo finish, wins the race.”

Why is the camera up at an angle like that? Plus with just one camera there could be distortion depending on the lens. Plus there could be refraction of light through the air, although it’s unlikely to be enough to matter.

And why is the camera up and to the side? There should be three, or maybe five, cameras mounted above the finish line aimed straight down. If you want to see if a thing has crossed a line on a 2D plane, you want a viewing angle perpendicular to the plane.

All that being said, while the line the participants see isn’t the true line, it’s close enough that it won’t change their behavior. The difference between the line they see and the true line is too small to matter for human perception.

Also, while it still has room for improvement the current system is still a dramatic improvement over what was used in the past. Imagine if a photo finish this close happened in like, the 1940s and all they had to go on were analog photos.

What can I say? All the answers to all your questions and concerns are right in the article I linked to in my post.

All that being said, while the line the participants see isn’t the true line, it’s close enough that it won’t change their behavior. The difference between the line they see and the true line is too small to matter for human perception.

This is very, very, very rare, but weirdly has just happened twice in two weeks.

Just remember, the image you see from the photo finish camera isn’t a capture of any single moment in time. It is a graph showing what the camera saw across a single line of pixels every 3800th of a second. That’s why the wheel spokes look weird and there’s no change in the background across the image.

Once you get your head around that, all your other questions and suggestions about more camera angles or cameras pointing straight down are moot.

I guess I’ll have to read it then.

Once you get your head around that, all your other questions and suggestions about more camera angles or cameras pointing straight down are moot.

Yeah, I guess that makes sense now that I’ve read it. Now I’m more interested in seeing the camera sensor that is just one vertical line of pixels. I have to imagine it’s actually a normal sensor, but they just only capture pixels from one vertical line. 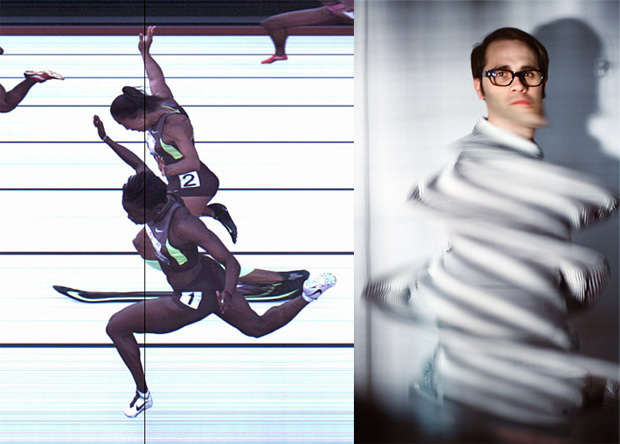 Yesterday we reported on how US Track and Field saw its first "photo finish" tie this past weekend in an Olympic qualifying race. If you thought the

Obviously this an extreme silly example, and I can’t be bothered to search but I seem to recall someone suggesting this idea earlier in the thread, but speed running golf: 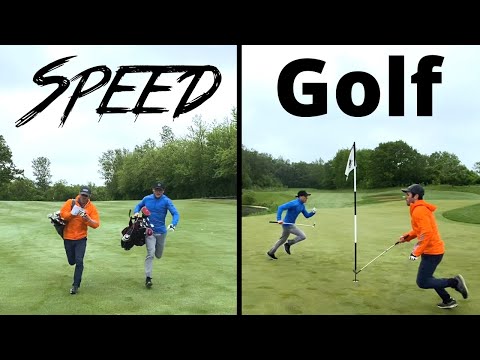 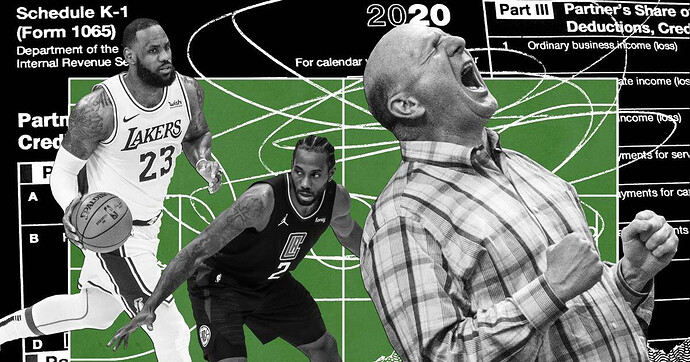 The Billionaire Playbook: How Sports Owners Use Their Teams to Avoid Millions...

Owners like Steve Ballmer can take the kinds of deductions on team assets — everything from media deals to player contracts — that industrialists take on factory equipment. That helps them pay lower tax rates than players and even stadium workers.

Fixing US taxes will go a long way towards fixing sports ownership.