Just finished reading Oryx and Crake the other day. I enjoyed it overall, but I’m not interested in reading the next few books.

Just started reading Senlin Ascends by Josiah Bancroft which has been pretty interesting so far.

All you need to know about Transgender History by Susan Stryker is the first 1/4 of it is a glossary and the actual book starts in the late 19th century. Not recommended for anyone who is trans or a historian, this is a book for casuals and The Cis.

I mean the sort of person who reads Zinn’s A People’s History and McCullough’s 1776 but has never heard of folks like Eric Foner or Ron Chernow. Definitely not for academics.

I’d call myself a casual in this regard. Like… When Debs was in prison, he had some books in his cell and visitors commented on how all he had was non fiction and theory. He wasn’t a casual.

If I was in prison, sure there’d be some theory in there but there’d also be novels.

I am casual, Debs was not.

I’m not gonna say you’re not a casual, but I will say that you’re not casual enough for this book in particular.

Then I’ll give it a read after I finish The Power Broker and Understanding Marxism.

I was lent Gideon the Ninth by one of my convention staffers, it’s very readable.

I am 65% through Pages of Pain, I might be ready to talk about it in book club by Memorial Day. :-/

My next book is Money and Government by Robert Skidelsky and I’m enjoying it so far.

Obelisk Gate is not as good as The Fifth Season. There’s something less about it, the characters or story, that changes between the two and makes Obelisk Gate not as enjoyable to read.

I started and then dropped Stone Sky halfway through. This story is not interesting anymore; a shame because I like how Jemisin writes, and I will definitely keep an eye on her for future works.

For a change of pace, I started A Problem From Hell: America and the Age of Genocide by Samantha Power.

I finished my 26th book for the year a week ago, Abbadon’s Gate (3rd in the Expanse series). I enjoyed it and the Expanse gets better, and more crazy, as the books go on. I know it’s hard scifi but there are things in there that are … less so.

I read the first books to The Black Company and Malazan Book of the Fallen this year too. I was hoping that they’d really grab me into some crazy epic journey. They were both cool but I’m not sure I am really feeling them.

The Malazan book actually had me looking stuff up on wikis though, at some point some I was having a hard time figuring out what was going on for the back ground of the world, and since I was listening to it and not reading it there were no appendixes or maps to look at. I feel that’s probably something that isn’t as helpful for audio books vs dead tree ones.

Iirc the books does that on purpose to make you feel lost, which is part of the reason why I haven’t bothered with Malazan.

I figured I must have picked up the wrong Malazan book first.

Prince of Nothing seems to have spoilt the fantasy genre for me. I’ve been trying the Court of Broken Knives by Anna Smith Spark but I’m just not enjoying it.

I’ve very much enjoyed the first three Malazan books, but I’m in no hurry to continue. It’s such a big commitment to jump in to a new one, knowing that it’s not a direct continuation of the previous book in terms of either time or characters.

There’s a lot more more manageable or approachable fantasy out there.

IIRC generally stands for “If I remember correctly.”

I started The High Druid’s Blade from the library because I’d vaguely heard of Terry Brooks. Didn’t finish. All the characters were entirely predictable and ridiculously stupid. The evil wizard kidnaps sister, beats up brother but does not kill him and tells him where the wizard lives. Brother follows wizard, rescues sister, and talks to wizard but does not even try to kill him. Then b and s go back home and behave like it will all be OK.

I thought maybe the wizard was actually good and trying to awaken the brothers’ magic? but reviews say no, and that I also missed some sexual torture by stopping early. 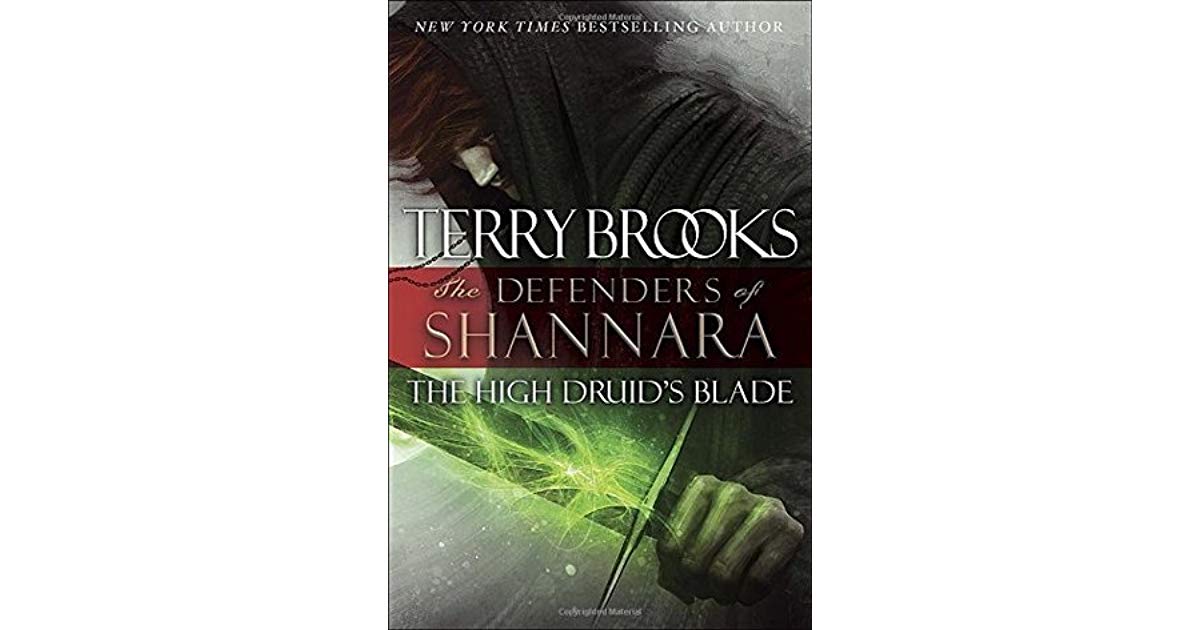 The High Druid's Blade (The Defenders of Shannara, #1)

NEW YORK TIMES BESTSELLER Legend has it that Paxon Leah is descended from the royals and warriors who once ruled the Highlands and waged...

I got into Terry Brooks back in the early 90s with the first three Shannara books(some of the first big fantasy novels I read, it scared the nuns at the catholic school I was at), which I liked. I learned later that the first book was a damned near scene for scene rip off off Tolkien (I personally like The Sword of Shannara better, but only because there’s a single mech in it which tips it’s hand that the world is future-past fantasy rather than a deep past-past fantasy, this is waaaaay more apparently in the recent tv show)

I haven’t liked that he’s kept adding onto the series more and more. I enjoyed the next couple books after the first trilogy, and the prequels that take place in a near future from now, the Knights of the Word books. I feel like the entire oeuvre of Shannara is much.

Oh yeah I finished Lies of Locke Lamora. It was fun. I liked the way it had a very small “power curve” in general, very few characters, a very comprehensible plot. It was a nice change of pace from vastly complicated fiction. Nothing wrong with very complicated stuff, of course. There wasn’t a need to remember 600 characters, cultures, etc.

If it makes any difference, around book 5 or 6, the two separate plots converge and the books don’t jump back and forth anymore.