3 Visual Novels you should check out before condemning the entire medium as...

For those that don't know, a Visual Novel (not to be confused with a graphic novel!) is medium that is best described as an in between of a video game, anime, and book.

Herein we talk about VNs!

I have a vested interest in the success of Ghosts of Miami, full disclosure, but it’s finally live so I can talk about it! 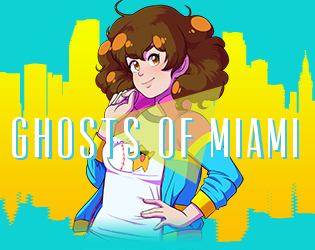 Ghosts of Miami by pillowfight

Is there a vn guide for new players to see some of the more popular ones?

I don’t know if there is a good guide to the best visual novels - but I have been play along with Slowbeef’s Visual Novel Book Club of Hate/Hate+ and I am planning on going back to read Ever17.

Analogue a Hate story/Hate+ is the only visual novel I have played all the way through and I have to go back to Umineko (I stopped at episode 3 of 8 of that one.) sometime soon.

If you want some more gameplay with your visual novels and don’t mind Sci-fi Anime bullshit and game Theory - The Zero Escape games are quite good:

There’s also the World End Economica Trilogy, which is written by the same chap who wrote Spice and Wolf. It’s pretty good!

Also, I remember that old thread. A much older instance of me grousing on a new member about paragraphs, and the dude setting the forum record for fastest self-destruction by suddenly exploding out of nowhere. I still wonder what his deal was, now that I think about it. Like, I get that VNs are not always a well-regarded part of the hobby, but damn son.

I had that guy I knew in finance who knew them as “Asian Fuck Games.” No judgement: that’s just how he described them.

Does VA-11 Hall-A count? Because I really liked that one, going through my new game + of it right now.

I kickstarted that one but I haven’t got around to play it yet. Just quickly looking and I have a few more I have played or heard good things about:

Try to to get assassinated: as a young Queen while Training your skills:

If you like Ryan North’s Dinosaur comics or Squirrel Girl and love Hamlet:

One of the old classic visual novels:

Want to read some lesbian bondage written by a transgender woman?

Muv-Luv is aparantly really long and really good. It starts off high school romance and then turns into giant mech battles against aliens:

It is now official I will be doing a dub of a visual novel for charity.

This may be a train wreck but should be fun and interesting to be there in person.

When are we gonna get a GeekNights dating sim? I want to see anime versions of the frontrow crew. Trying to bed senpai Rym and/or Scott.

“Yume Miru Kusuri / A Drug That Makes You Deam” is a great vusual novel. It is one with adult content but it definitely had some great themes to the story. I’ve also been reading the first installment of the “Flowers” series which is a moody, etherial, mystery visual novel, no adult content. Very yuri, definitely inspired by Maria-sama ga Miteiru and similar.

When are we gonna get a GeekNights dating sim?

Muvluv is the quintessential “no really, it gets good later!” piece of media. But then again, I never understood what people saw in Homestuck.

Muv luv requires you to play through two romances routes that are incredibly boring, has a cast of incredibly flat characters, and writing that has an awful sense of humor.

That lets you unlock the secret storypath in which you train to be a mecha fighter pilot in an alternative timeline where Earth is invaded by aliens. Think “Edge of Tomorrow,” in fact, it may be possible that the light novel it was based on “All You Need is Kill” is a bit of a pale imitation of Muv Luv. Except, they edge the hell out of you and you finish the secret storypath without ever fighting or even seeing the aliens you’ve been training to fight.

It definitely has a lot of flaws, especially towards the end. But man, I easily have it as my favorite visual novel ever despite them. It’s hard to recommend due to a huge barrier of entry but its pretty amazing to what lengths the story goes to set up the payoff later on.

Great little underappreciated VN I love to death is Syrup & the Ultimate Sweet by nomnomnami! Basically any game Nami makes is adorable and you should play it. Syrup especially is cute and fun because it features candy, candy people, candy magic, candy capital enterprise, and a few horrible morbid endings thrown in with the standard good ones to mix things up.

Also: multiple gender options for the routes that include a pairing (and not all do)!

The game is pay what you want, including free! EDIT: And since I last checked, there is now apparently a web-based version of the game, so you can play it in your browser as well!

It’s been a while since I’ve played a VN other than the Phoenix Wright series, but I used to be really into the VNs by TYPE-MOON, like Tsukihime, its fan-disc Kagetsu Tohya, and Fate/Stay Night. I’m still waiting for that Tsukihime remake, though.

Now that Fate/Hollow Ataraxia and Mahoutsukai no Yoru: Witch on the Holy Night have full fan-translations I might read through those, too.

If you want less gameplay in your visual novels (I heard them being called “Sound novels” since there is no interaction.) the 5th Chapter (of 8) of Higurashi (When they cry) is out. Higurashi is being re-translated and released chapter by chapter at a 6 month gap between them. While Umineko (the second “When they cry” series) is being released in 2 parts with the Question Arc (Chapters 1 - 4) having been released currently. 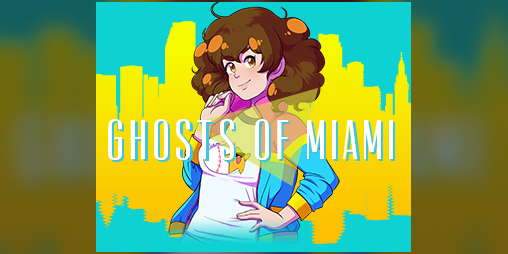 A sale by pillowfight, 10% off Ghosts of Miami

Buy this. Play this.