Just thought of another.

In juggling, we often communicate throw height with a number, but it isn’t a height in metres or feet. Instead it’s based on the siteswap value of the throw if juggled in a pattern with an appropriate number of objects. Tell a juggler “throw this ball as a four then as a seven” and they will do almost exactly the same as every other juggler.

Since I do a lot of design work on small things I’m pretty used to tenths, hundredths, thou, and cuz a thou is pretty small for most machining work I do maybe a half-thou is as small as we go.

Milimeters are OK but I always struggle with whether to round to the nearest tenth or hundredth.

I would like to use metric across the board, but, living in the US, I’m more or less conditioned to be more comfortable with Customary/Imperial/WTF you want to call those units for day to day use.

The metric units in common use that I don’t get intuitive senses of their scale are the kilometer, the kilogram, and degrees Celsius.

Let’s leave out the more scientific ones like the weber, tesla, coulomb, etc. I’m not even sure they have equivalents in US Customary.

Oh, and then there’s the whole MKS vs cgs thing… but that’s yet another debate.

Yeah I’m pretty well aware of that. I frequently go back to original texts for recreation purposes. Things like “boil for the length of time it takes you to walk your fields” or “for the span of 10 Lord’s Prayers.” At some point, the acre was defined as the area that a team of oxen could plow in one day.

This of course is for the English acre. The Normandy acre is another monster entirely.

Cool semi-related factoid. You know how super-official matzoh is supposed to be baked to completion within 18 minutes of preparation? Yeah, 18 minutes is a fabrication. Turns out the original original measurement was “bake for the length of time it takes to walk between [two monuments in ancient Jerusalem].” Then later a bunch of rabbis decided that it meant two different monuments that were separated by a quarter and a twenieth of an hour (which in the original language meant something other than what we mean today), and then that “quarter and twentieth” was applied to our current time measurement at some point.

I think this was a thing of the day once, but my favorite unit of measure is still the Smoot. The only object to officially be measured in Smoots is the Mass Ave Bridge in Boston, which is cannonically 364.4 smoots and one ear.

I am a dumb American and I can’t estimate or measure for jack, but I have a friend who measures exclusively in metric, even setting his car to display in metric. I swear he’s doing it to confuse everyone around him.

bleh math is too hard 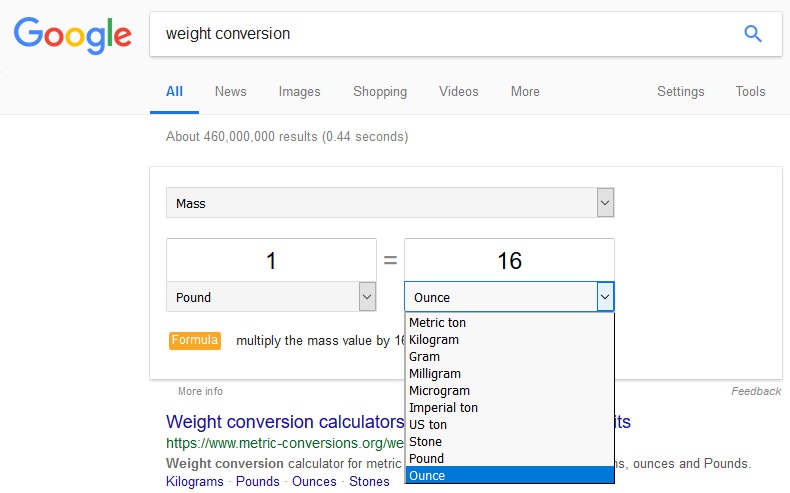 Even though I live in the US, I forced myself as a kid to learn the metric system and 24-hour clocks (because, yeah, I was a weirdo). It helped when chatting with non-Americans on the semi-early internet (late dial-up to early broadband eras). I still grok things like inches, feet, cups, pints, and miles per hour, but I can’t estimate pounds or Fahrenheit degrees very well. I have no internalized concept of an acre or really a mile (I also tend to think of distance in terms of time, though it’s super inaccurate).

I use milliseconds a lot when coding, but I guess the only uncommon units I use regularly are shaku and sun, which are used in sword measurements. I kinda wish decimeters were more common, since they’re really human-scale and easier to think about than tens-of-centimeters.

Emily and I ran a 5k race today. 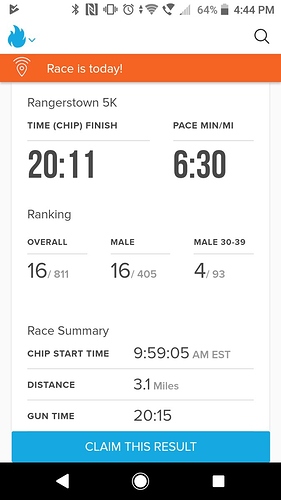 I’ve talked about this a lot elsewhere, but in the US, it’s standard to do splits in miles regardless of the race distance. So a 5k or 10k race has official mile splits. Usually there is zero signage in kilometers.

This race even had the clocks at each mile so you could check your pace.

The cadence of a 5k in the US ends up reliably being broken up into:

This is how we tend to talk about, think about, train for, and pace ourselves during a race. I wonder if people in places where it’s all just kilometers think differently or pace differently.

I wonder if people in places where it’s all just kilometers think differently or pace differently.

As I’ve been tweeting at you for the past few years, yes.

Heh, yeah, back when I used to attend Anime Boston. Occasionally I’d stay across the river from the Heinz in Cambridge and I’d walk across the smoot bridge. What this usually meant is I’d get all excited when I remembered the story and the girlfriend would roll her eyes.

Fun fact: that bridge has two names: Most people call it the Mass Ave Bridge, as it’s the only major bridge on the length of Mass Ave, but the official name is the Harvard Bridge, after John Harvard, founder of the university. Rumor has it that they WANTED to name it the MIT bridge (the Cambridge side of the bridge dumps traffic right in front of the iconic MIT main building in the middle of MIT’s main campus), but MIT thought that the bridge was structurally unsound (which, the original one was, kinda, and it was replaced in the 80s after a similar bridge collapsed).

Originally, it was thought that the smoot marks were going to go with the original bridge, but BPD and CPD find them so useful for locating incidents on the bridge (which looks shorter than it is; it’s well over half a km) that they insisted that the semi-graffiti continue.

I have never heard anyone call it the Mass Ave Bridge. The video brings up that MIT wasn’t on that side when it was originally built and named.

The video is actually pretty great. It accurately covers most of the trivia I know about the bridge proper. The only part I would have added would be the Halfway to Hell mark.

Weird, i call it the Mass Ave Bridge all the time, as does everyone I know.

When we used to walk across it I remember noting that it was weird we couldn’t find a name for the bridge in any nearby signage. I just called it the smoot bridge. Also went and found the plaque on the MIT side.

Street signage being at a minimum is the Boston way.

Street signage being at a minimum is the Boston way.

I’ve legit missed meetings in Boston due to lack of signage on streets and buildings.

If you don’t know where you are, you ain’t supposed to be here.

In a massive development, Le Grand K is being deprecated!