No one wants to bring up Aleksandr Dugin, his book The Foundations of Geopolitics, or Mackinder? 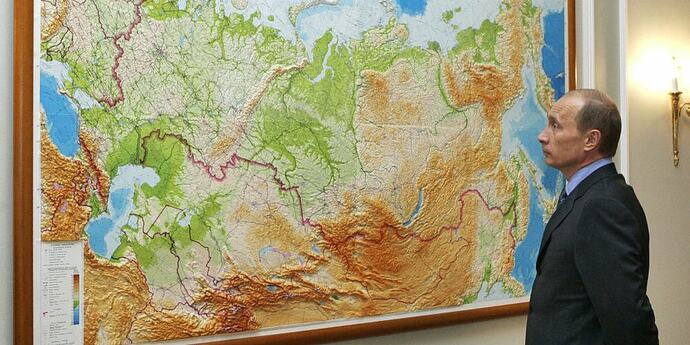 How an obscure academic and a marginalized philosopher captured the minds of the Kremlin and helped forge the new Russian nationalism.

It used to be that you only saw stuff like this in comedy-sci-fi stories. 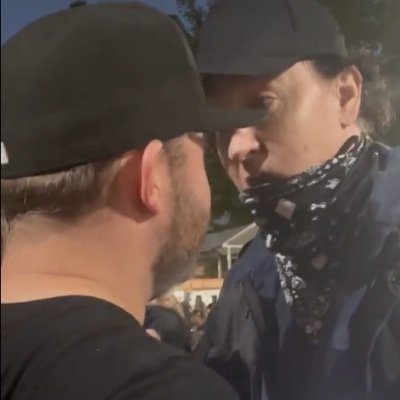 Robocop was a documentary about the future.

Which is now the present. 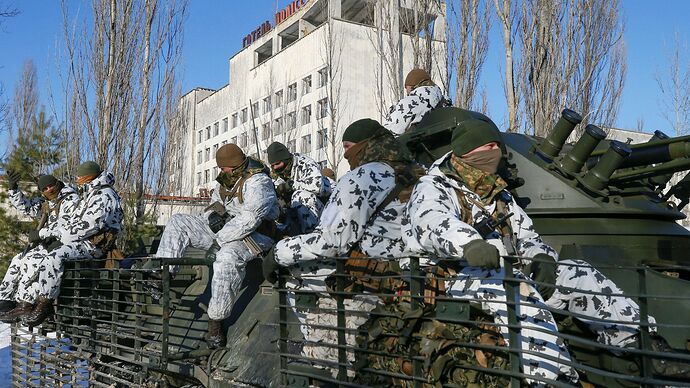 Ukrainian President Volodymyr Zelenskyy called the attack "a declaration of war against the whole of Europe."

I don’t think you would want to be anywhere near there, but okay…

CNNP has been in constant operation since the explosion event until recently and has been under constant occupation by workers now decommissioning the remaining facility. Working at the plant or even staying in/around the ‘Zone’ hasn’t been dangerous to occupancy for a long time, provided one takes the normal precautions.

Then again fighting in the area isn’t going to improve that situation, so other than capturing it for symbolic or strategic reasons not sure why one would put energy into fighting around it.

That said now all the STALKER larpers are going to be looking for images of troops fully decked out in Ratnik gear fighting on top of the sarcophagus. Would never have imagined it going down like this myself. Guess some commander been playing too many video games and wanted to do it for real.

I think splitting history between USSR and Russian federation is a non-helpful as everyone in leadership militarily, bureaucratically and politically was informed by the events of late-cold war brinkmanship of Reagan and they view the US/NATO/WesternPowers through their own historical lens.

The US-NATO exercises have almost caused direct war in the past (Able Archer 83 - Wikipedia).

That is not to say that I think Russia is right or that it has a better claim vs Ukraine’s own sovereignty, just that the repercussions and risks for US & NATO actions here are quite high for a country that is not a treaty member.

Quick google maps trip and The reactor site is on a line if you were going to do an encirclement around Kyiv at the edges of Ukraine’s border and is also near a strategic overlook of the Dnieper river. 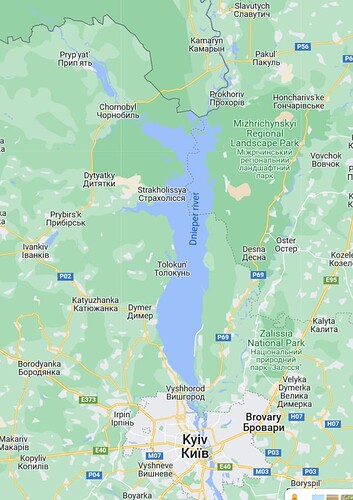 the repercussions and risks for US & NATO actions here are quite high for a country that is not a treaty member.

I think that is an unhelpful thing to say.

This isn’t about NATO. It’s about the global world order and a people who are being brutally invaded and occupied by a foreign military power at a scale we haven’t seen in a long long time.

Remember that NATO is not its own military force but made up by the military’s of the member countries. So should Germany, France, Poland, Great Britain, etc… not be allowed to posses and train their military for fear they will scare Putin? I’m sure you will agree this is a ridiculous assertion, so the member countries conducting training drills together is not sufficient reason to say Russia has been understandably provoked.

Besides all of this is a moot point because Putin himself has completely left-behind this line of argument (NATO) about why he is doing what he is doing, he made it very clear that he believes Russia is entitled to the historic lands that once were part of Imperial Russia.

Honestly I’d prefer the thread be locked as there’s no point in having it if dissenting opinion is going to be met with hostility.

Quick google maps trip and The reactor site is on a line if you were going to do an encirclement around Kyiv at the edges of Ukraine’s border and is also near a strategic overlook of the Dnieper river.

A point I saw mentioned is that using Chernobyl as a staging ground provides shelter against long-range shelling - because nobody is going to risk widespread disturbance of potentially radioactive material.

Any opinion is permitted as long as it does not include dangerous misinformation, support for evil ideologies, calls for violence, non-constructive debate, etc.

If someone has an opinion to share that is so valuable it is worth everyone else’s time to read it, then the poster can put in the effort to research and express themselves in a way that does not violate this code. If someone is unwilling to spend the time to write their post, then it’s not worth our time to read it, and we’re better off not having it posted at all.

If a person is completely unable to express their opinion without violating the code in some way, then world would be better off not listening to what that person has to say. Such a person should spend their time examining their media diet, their beliefs, and themselves instead of spreading their ideas.

I really don’t think this is that difficult.

A point I saw mentioned is that using Chernobyl as a staging ground provides shelter against long-range shelling - because nobody is going to risk widespread disturbance of potentially radioactive material.

I can’t say whether that was intentional on the part of the Russian military, but it’s certainly a clever thought from some person on the Internet who probably plays too many strategy games.

Ukraine is not a NATO member and yet NATO member military forces were doing training in Ukraine last year. 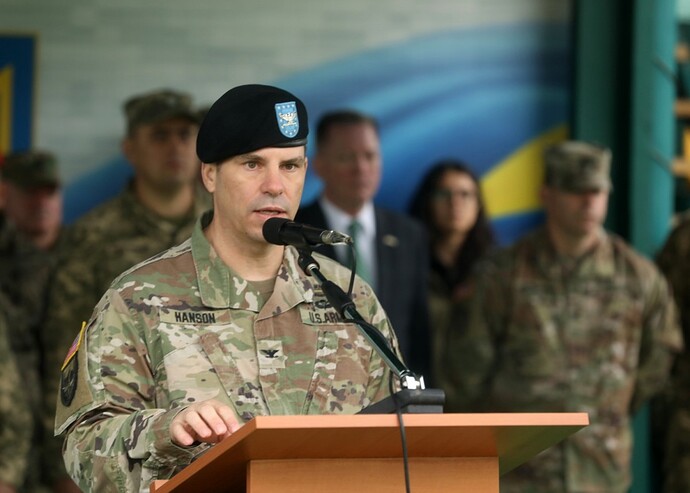 I’m not critiquing US and Germany training together in NATO ops in Germany, I’m critiquing NATO members doing a joint operation within the Ukraine and the idea that Russia wouldn’t perceive that as an antagonistic act. I’m strictly speaking about this as putting yourself in the shoes of the opposite party so you can better anticipate how they would act.

We’ve already had dissenting opinion expressed and met with being called unhelpful or something like that. Afaict no rules were broken and that sentiment is what I’m objecting to. Not the rules as written.

IMHO, the US spent a lot money and blood and caused a ridiculous amount of causalities in local populations in Iraq and Afghanistan to essentially help defense contractors make sales, make politicians look tough, and buff the careers of professional soldiers and bureaucrats in the name of much higher ideals.

I think its worth debating the relative costs different responses in Ukraine would entail in light of what the US’ past 20 years of foreign policy have been. I don’t think there is an impact to US credibility in taking a limited approach here that there would be had this been a treaty member.

I’m not critiquing US and Germany training together in NATO ops in Germany, I’m critiquing NATO members doing a joint operation within the Ukraine and the idea that Russia wouldn’t perceive that as an antagonistic act.

I mean, Russia could certainly perceive it as antagonistic, sure. The issue is, that perception really isn’t valid. NATO is not an aggressor - yes, more countries joining certainly might make you feel hedged in, but when you have a history of being an imperialist aggressor, what do you expect? If NATO had been making overtures at invading Russian territory, I could see that point - but NATO forces are reactive, not aggressive.

That’s the core issue I see here. Russia is crying foul because a bunch of people they once conquered and abused are banding together to protect themselves from further Russian aggression.

As for joint operations in the Ukraine - it’s hard to interpret what’s going on there, but we do know that Ukraine applied for membership in NATO in 2008, and that interest was renewed in 2014. Given that context - a joint exercise hosted in an aspiring coalition member seems less like an intentional antagonism and much more like alliance-building among prospective allies.

Honestly, if that hurt Putin’s feelings, I don’t know what to say. You were the bully and now the people you bullied have decided they’ve had enough of your shit. They teamed up with the bigger bully who’s on their side. That’s the politics of nations.

EDIT: Which is not to say I think that the US’s involvement in NATO is entirely selfless or defensive - but there’s really no way for us to be involved in a coalition that doesn’t result in us effectively projecting power into that coalition’s actions. Anyone opposed to us is going to take that as an aggressive move whether or not we have aggression as a goal. I honestly don’t think there’s a way around that, and I don’t think it’s worth trying to work around it either. We shouldn’t be doing an imperialism, but being part of a defensive coalition cannot reasonably be said to be an act of imperialist aggression IMO.

I’m not critiquing US and Germany training together in NATO ops in Germany, I’m critiquing NATO members doing a joint operation within the Ukraine and the idea that Russia wouldn’t perceive that as an antagonistic act.

Do you have evidence to suggest that Ukraine or any of its allies in that joint operation had any intent of invading Russia? If not, then how can any such operation be considered antagonistic? If Russia was not already intent on invading Ukraine, and knew that Ukraine would not be an aggressor, why would it care however much Ukraine bolstered its defenses? What should you care if your neighbor spends time building a wall along a line that neither of you ever cares to cross anyway?

You see the same thing when North Korea fires a rocket into the ocean. It’s easy for them to say they are defending themselves from a world that is hostile to them. It’s easy for us to see them as preparing to attack. As we are not CIA agents or military generals we have no such intelligence from which to know if it’s one way, the other, or a little of both.

Again, the only thing that is clear is Russia is a military aggressor, and is therefore in the wrong. The US and its allies may have been aggressors in many ways, but there is no evidence suggesting there was ever any military threat to Russia itself. The only way to make that argument is to agree with Putin and say that Ukraine was actually part of Russia all along and never a sovereign nation.

Even if somehow every single accusation that has been levied against the US, NATO, Ukraine, and friends were somehow 100% true. Even all those accusations combined still do not justify an invasion of the sovereign state of Ukraine and the murder of its innocent civilians with military force.

I know in this forum we can get completely pigeon-holed on phraseology and parsing meaning and intention. I just want to take a step back from that to say something that I suspect all agree with - regardless of which side did what and why, this is a shitty shitty situation for Ukrainians and the stability of global peace. 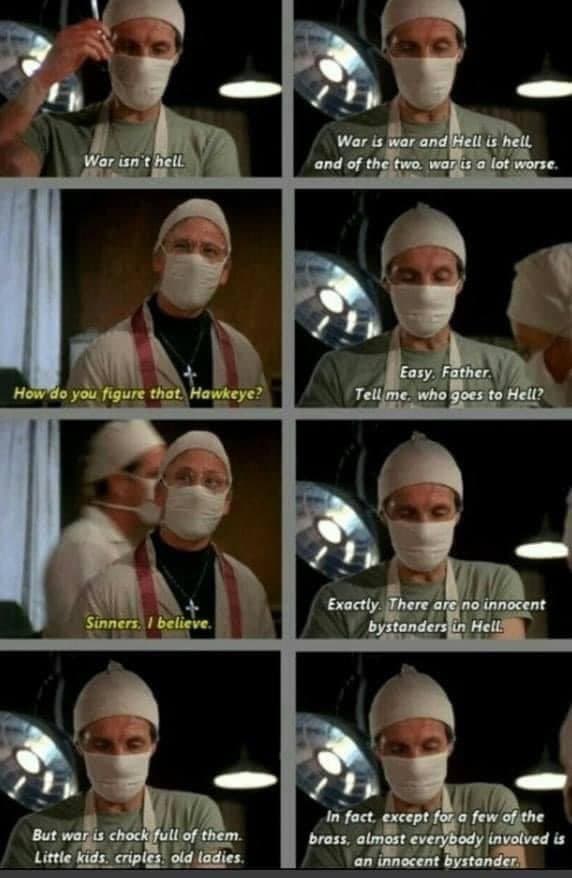