We've discussed The Burning Wheel a few times on the show, and we've even interviewed its creator. I have a simply question:

Just be prepared when you roll out a non pre-made game that you are more than likely not gonna get to the story on the first session. Character creation has typically taken forever in this game, especially with people who have never played something like it before.

Making characters in BW is a lot of fun though, since the concepting and the creation go hand in hand.

I’m an extremely new player, Shortly before the new year I ran The Sword for my group. Now we’re on brief hiatus for holidays. We’ve never delved into character creation.

The biggest tip I can give on BW character creation is to tackle it as a group effort. Usually on DnD everyone designs their PC in a very wish-fulfillment manner, which is an area where BW’s emphasis on interpersonal conflict crumbles a bit. So decide what type of game you want to play, and then design your character concepts around the world. Designing them around each other is also an option, but it should all be good as long as the characters are not directly in contention with each other. (As in to a point of breaking the game.)

Have a belief about sticking together if your players like to murder each other all the time. It’s a requirement for my party after 3 disastrous campaigns.

I don’t necessarily make a belief that is literally “Stick together team!” But I do always make one belief about the other party members. If you didn’t have some attachment to them, why would you be with them in the first place? It just doesn’t make sense.

It doesn’t even have to be a positive belief. It just has to be some kind of reason that you are with them.

Maybe you are indebted to them, and you always pay your debts because of honor.

Maybe you are very greedy, and they are paying you enough for you to stay with them.

Maybe you are afraid of someone else, and the party provides safety.

Maybe it’s just a convenient arrangement. You’re a nice person, they are nice people, and you’re all going the same way, so why not team up?

You can also always put in a stronger connection. Maybe you are related to each other by blood. Maybe you have been life long friends? Players, self included, tend to always make individual characters, and then find a reason for them to come together. Why not make characters that are very very close to begin with?

The Middarmark, a setting supplement for Torchbearer, is on Kickstarter.

Get it if you want hard copies or the map, the PDF will be available to backers of the original torchbearer for free.

I missed the original Torchbearer, so this works as a chance to get both in one go.

We had our first Burning Wheel PC death. Our roden sorcerer:

Also, they had no persona for a Will To Live. RIP Aygöl. 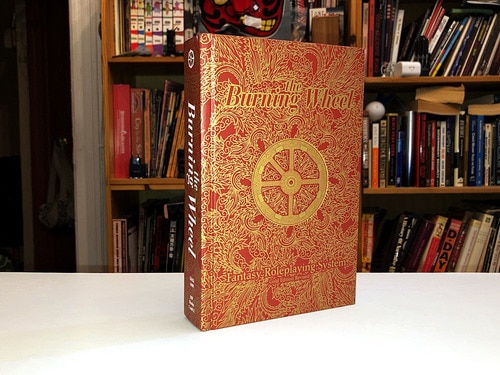 Burning Wheel is an award-winning fantasy roleplaying game in which players take on the roles of vibrant, dynamic characters whose very beliefs propel the story forward. The Revised Edition of Burning Wheel Gold is the definitive Burning Wheel book...

Miseries and Misfortunes has been released as a PDF. 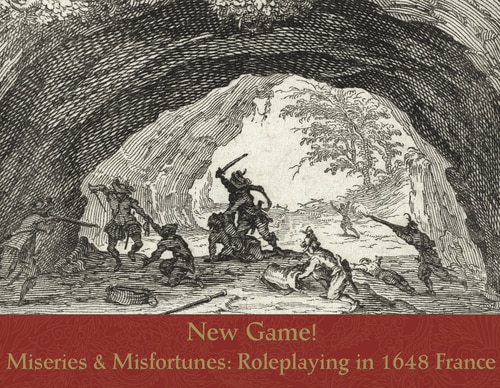 The Kickstarter was PDF only for international backers so I held off. Going to see if they’ll release a hard copy internationally.

I have created an interactive Excel character sheet for Torchbearer. 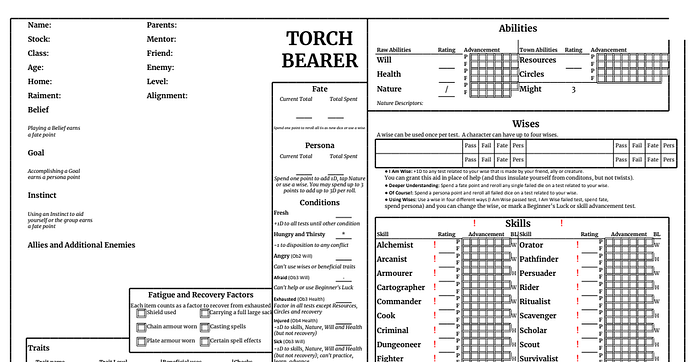 It’s based on the original character sheet but with updates for level 2 traits and level up table costs.

But the real fun stuff is when you mark conditions. Mark a condition and see a warning flag up against anything that is affected by that condition. Practice on the Beren tab!

This game is really magical. As a GM of 8 years now, I’ve been more invested in my player’s character’s of just two sessions than dozens of hours of other games.