So the new Star Trek: Discovery started this past weekend. I only watched the first episode but I loved what I saw so far. Regarding the special effects and setpieces, CBS pulled out all the stops on this one. Outerspace looks gorgeous, the ship looks amazing, the makeup is fantastic. The crew of USS Shenzhou is interesting and the Klingons are awesome. I can’t wait to watch more of this. My only gripe is I have to if I want to legally watch this got to pay for CBS streaming service.

I can’t wait to watch more of this. My only gripe is I have to if I want to legally watch this got to pay for CBS streaming service.

Wait, what? I thought it was a netflix original, that’s where I’m getting it. 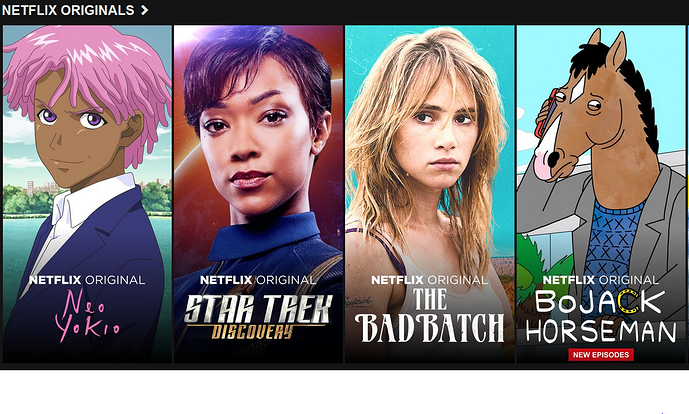 The US has to go through the CBS streaming service to watch. Other countries have other alternative options.

I have two major complaints about Star Trek: Discovery S1E1.

First, the opening credits look super cheap and derivative of so many other opening credits I skip past on NEtflix these days, and the theme music that plays is almost indistinguishable from Daredevil and a few other shows I don’t remember now but Juliane listed off the top of her head.

Second, a note about the confidence the director had in the makeup department in the very opening shot. The entire show starts with a zoom out from an eye. The eye is really big and fills the screen completely and you see it all in HD detail. And it’s so obviously a human eye at first, and as it zooms out the join between the human face underneath and the makeup and mask is so painfully obvious I had to pause the show just to get it off my chest. This is a real pity because the rest of the masks and makeup are excellent, especially Saru. The Klingon makeup is good too, but not so close up in so much detail!

But, except for literally these two factors at the very start, I really enjoyed the rest of the episode.

Also, I didn’t know going in when in the Star Trek timeline it was all taking place, and wondered where the Klingon had been for 100 years since the last Next Generation movie I saw. Turns out this is all happening before Kirk and the gang got together.

I was SO nervous that this show would be awful, like the recent Star Trek Hollywood movies. I’m glad to hear that it stands up in quality, and I hope that keeps up as the show progresses.

I’m pretty surprised, too, since the first season(s) of a new Star Trek show usually take a bit of time to really build its own identity and get comfortable with its new setting.

I hadn’t realized it before but the opening does copy quite a lot from the Marvel Netflix shows. I didn’t hate the opening was just underwhelmed with it. At least the producers didn’t use shit rock music that the Enterprise series had.

I will have to rewatch the opening shot. I’m blanking on the eye sequence I just remember the captain and first officer being in the desert. I must have been doing something else when that happened.

The good: Set and budget is out of the world. Acting is pretty fantastic and I enjoyed the plot.

The bad: First two eps felt like a prequel, disjointed from the rest of the show (as shown in the trailer for the rest of the season). Hope there is a bit less action and that they can find the lighthearted joy that TNG exploited so well.

The ugly: Way too much lens flare and dutch angle. I spent half the episode blinded and nauseated by the cinematography. Intro is complete dogshit.

I must be the only person on the Internet who actually likes the intro. I actually think it might be my favorite of any Trek series.

I absolutely LOVE the visual technique of turning the sketches into the actual objects. I love the flat colors and the way the introduction reminds me of a classic scifi movie poster. I like the hint of the original theme from TOS to make me feel nostalgic about all the Star Trek I grew up with.

The entire intro just seems “classic” to me, trying to remind the viewer of everything they loved about Star Trek.

Visually it’s alright, but my god, the music is horrible! A half-assed theme that stops abruptly so we can play the original melody once, but end it on a really awkward note that feels hollow.

Again, I must be the only person who likes the music. It’s subdued and muted. It’s not bombastic like TNG or the other series. It starts with a snippet of the TOS theme and then goes to a low horn section. For me at least, the music gives me a feeling of anticipation, slowly rising and picking up speed until it ends with another piece of the TOS theme. I think it’s elegant and understated right up until the end when it leaves me pumped and excited.

Visually, it is prettt dull, too.

I like the opening visuals, but because it’s redrawn concept art, and that can be a kind of designer kool-aid.
The music though… it goes nowhere. It partially develops, halts abruptly, partially develops again before halting again. It definitely reminds me of marvel tv/film openers, particularly with the use of strings. I can see how they wanted to create something new, but in the process failed to create something iconic, unlike, say the TNG opener.

Which is funny because the TNG opener reused the music from Star Trek: The Motion Picture.

The first two seasons of TNG has some issues, but there were certain episodes that really used the music well. After Roddenberry left the stories got more interesting but the music wasn’t used the same way.

The original Trek also had that going for it. I can remember the music from every Arena fight in Star Trek, but I can’t remember any music from say “The Voyager episode where 7of9 fights the Rock”. Same thing with Babylon 5 and the DS9: Dominion War, I can remember one, and swear the other didn’t have any music.

After early-TNG and Babylon 5 (and Firefly’s opener), the next major Sci-Fi series that had music I remember is newer Doctor Who (early Matt Smith-era)

“The Voyager episode where 7of9 fights the Rock”

I googled this. It’s not made up! The Actual Rock.

I enjoyed discovery so far, but why the Klingons gotta look so much like orcs now?

Just finished the first 2 eps, lots of potential I’m loving it. I’ve always leaned more towards the Political side of Star Trek, but I hope they discovery something in this series otherwise why not call it “Klingon War”

I get what you’re saying. This is Star Trek what’s happening to the Trek part? The exploration of the galaxy and all that. But I’m personally excited that they are finally covering the Klingon War. I remember being teased about a Klingon war series as far back before the Enterprise series was just about to be released. And instead, all we got was some b.s. time travel nonsense arc. That ended with Riker and Troi in the holodeck. I ready for some Bat’leth bashing. Bring on the Klingon War.

So the Star Trek: Discovery finale just air last night, and I am actually really surprised at how much I enjoyed it!

My main Star Treks were DS9 and Voyager, with DS9 being my favorite. I feel like I was more primed for this type of storytelling by being first exposed to that series, though I am definitely curious to hear what TOS/TNG-mains think about Discovery.

I got started on TNG. Watched all of TNG. Most of DS9 and most of Voyager. Didn’t like Enterprise and watched only a handful of episodes. As for Discovery I enjoyed all of it. And I’m looking forward to 2nd season.