A simple topic with so many routes.

Do you prefer slow burns or fast? Hot peppers or like… mustards and horseradish?

Can you handle spicy food? Are the aftereffects worse than the initial?

Do you find different things work with different peppers? Have any personal recipes?

I love slow burners, but I do not have the spice knowledge to find a sauce that gives me a good, slow and steady burn.

Otherwise I really like good wasabi partially because of the underlying flavor.

Well, really I enjoy spice that has other flavors underneath, rather than just liquid fire.

… I like Sri Racha, Sue me. It’s a guilty pleasure.

There’s no shame in liking Sriracha. Just because it became a hipster meme food doesn’t mean you have to stop liking it.

Also, verde sauce is the most tasty!

I like it when I sweat a little bit. I like it when that bit of spicyness enhances the other flavors in the food, e.g.: peach-jalapeno. I don’t like it when OMG IT BURNS and I can’t eat anymore.

There’s no shame in liking Sriracha. Just because it became a hipster meme food doesn’t mean you have to stop liking it.

Don’t let the hipsters gentrify siracha in your heart.

Otherwise I really like good wasabi partially because of the underlying flavor.

Fresh wasabi from the actual root is so delicious. Not that crappy green tube paste. Although, I wonder if I wouldn’t find wasabi flavored toothpaste refreshing.

My favorite spices are chipotle and ginger. 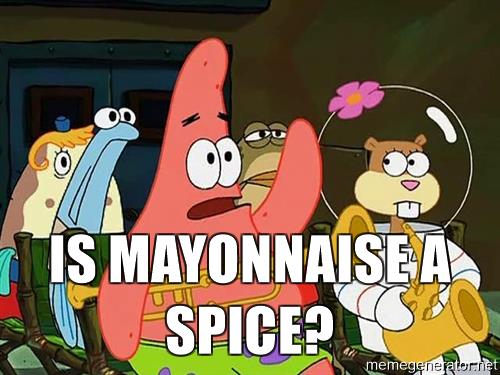 I’m pretty sure my mouth has no upper limit on heat but other parts definitely do. Ghost peppers don’t hit my mouth much harder than a few habaneros but the first time I ate one was the first time I became nauseous because of spice.

While I can handle heat, I do prefer it to be used for flavor more than just a burn. I hate when something is spicy for the sole purpose of heat.

I like spicy food but it often gives me instant hiccups which sucks.

I like spicy food, my wife however not so much. I’ve not made a proper chilli in years.

We went to India a couple of months back and I found the persistent spice diet more problematic to my stomach than having the occasional really spicy meal in normal life. This kind of took me by surprise because I never really got close to my limit on that tour.

One of my brothers is a real fan of spicy food and routinely raises his tolerance with sauces and rare chilli peppers going into his diet. The funniest thing is when he messes up and overlooks something. There was one time he couldn’t handle a spiced corn on the cob because his lips couldn’t handle it. Then there was the time he discovered that he couldn’t handle a horseradish sauce because the spice wasn’t the chilli type he could handle.

Both of my parents are from the US South and while my mom can tolerate spicy food, my dad is actually fanatical about spice and collects the hottest chilli peppers and hot sauces from around the world. Some of the shit he has is truly ridiculous and is probably not safe for consumption by living beings. I remember when I was 12 or 13, one of my dad’s friends thought he could handle some of my dad’s stupidly hot hotsauce. He had such a bad reaction to the hot sauce that we had to call 911 because his wife was worried he was going to have a heart attack or a stroke or something. So for my entire childhood having spicy food at every meal was normal and being exposed to extremely spicy food was not uncommon.

As an adult I very much enjoy spicy food and even enjoy what most people would consider extremely spicy food where I’m sweating profusely and it feels like my mouth is full of angry wasps and hot lava. But I don’t typically go out of my way to seek that stuff out like my dad does. At home I pretty much only stock, dried ghost pepper, dried red peppers, sriracha, garlic sriracha, and the obligatory Tabasco sauce. When at restaurants that give options for spiciness I typically go for the maximum spiciness without hesitation and pretty much never have a problem. It’s rare for me to order something at a restaurant here in Seattle and have it be actually truly spicy. The general taste for spice up here in the PNW is kinda weaksauce.

The last time I had spicy food at a restaurant that actually impressed me with its heat was at this place in West Seattle called the Crawfish House. Their menu for spiciness goes up to level 10, but their secret menu for spice goes up to 20. My friends and I ordered level 15 hotness. That was actually pretty challenging. Awesome, but challenging. We were joking with one of the proprietors of the restaurant that the people who have come in just to test out their level 20 spiciness only came in once because they probably all died soon after eating their mind meltingly insanely spicy crawfish. I mean, level 15 had me in tears and barely subdued panic the entire time. I can’t even imagine level 20.

My grandmother got me to first try spicy foods and it went something like Frank’s → Tobasco → Eating a habanero. That latter one was a bad idea at the time, but at this point I’ve grown some, eaten them, and generally been pretty happy with the results. I did figure out that at some point I suffer more for it later than I’d like if I have too much though. I have this one ghost pepper peach sauce that’s super tasty, but if I have more than like a teaspoon I’m going to have a bad time for it.

Also a big fan of horseradish, mustards, etc. Doubt I’ve ever had real wasabi, but would love to try it.

Little trick when I’ve grown peppers is just take red devil/franks/louisiana type sauces and make a paste of some habaneros and add that to the bottle and shake it up. Kicks it up and costs almost nothing. Plus the peppers I’ve grown at home tend to be a little sweeter for whatever reason.

A friend of mine got those “not hot” jalapenos you can grow. Honestly didn’t like it. I mean, I get the idea of the gimick… the flavor without the heat… but personally I didn’t feel like the flavor was there either.

There’s some kind of horseradish festival in Illinois I want to hit up at some point.

I’m in the Scott camp where I generally like spicy to where I get warm and my sinuses clear up. Anything more than that and I don’t enjoy it anymore. I also have to be in the right mood for spicy food, usually correlated with when I want Thai, Indian, Chinese, etc. The only spicy food I really avoid is wasabi since I just don’t like the taste, not a big fan of most mustards either. Everything else is fair game as far as things I’ve tried goes.

Speaking of mayo, check out the chipotle mayo from here (it is both mayo and spicy):
https://sirkensingtons.com/products

Mix 1 tbsp of that and 2 tbsp of their regular mayo with 1 can of tuna, smear the whole thing onto bread, add a slice of swiss and toast in the toaster oven until melty. Add tomato and lettuce. Super fast and easy chipotle tuna melt.

The only spicy food I really avoid is wasabi since I just don’t like the taste, not a big fan of most mustards either.

Most wasabi pastes are mostly horseradish and mustard. Real wasabi has the sting, but also a lingering sweetness, kind of like the green peppery part of a daikon, or radish. It tastes cleaner, crisper, like a peppery cucumber.

I generally do not eat capsicum spicy things, with exceptions for chinese, indian, and mexican food. Even then, I’m never sure which spice level to order because some places are super bland, and others aren’t. I used to hate salsa… now I love it.

I love real wasabi but have a deep distaste for horseradish. Horseradish may be the only type of spice I dislike in any form.

Real wasabi has the sting, but also a lingering sweetness, kind of like the green peppery part of a daikon, or radish. It tastes cleaner, crisper, like a peppery cucumber.

I can’t confirm if I’ve had real wasabi, but I do recall one place having “wasabi” that was kinda more caked together and sweet.