You may recall back in ancient times our talk on what a “game mechanic” is:
https://www.youtube.com/watch?v=UPU_yi9Nv3M

With that in mind, what are some tabletop mechanics you consider to be “rare.”

This is research for a new talk. One we’re actually really excited about.

Also weavings between hitboxes in a shooter with pixel accuracy.

Bohnanza hand is surprisingly rare. I’ll try to think of some more.

In Hearthstone’s next expansion they are releasing a card where hand order matters, just like Bohnanza and Wind the Film. 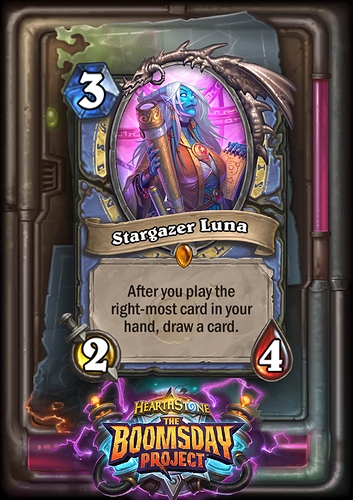 The only reason they couldn’t do that card in physical form is that every CCG player ever reflexively and constantly shuffles their hand.

It’s not the only reason, but it’s the number one reason I keep playing Hearthstone. It’s got too much randomness. It tries to take all your momeys. But at the end of the day it does things no other card game, or any other game period, is willing or able to do.

Caylus - Provost / Bailiff
Fresh Fish - Expropriation (this doesn’t feel that unique… more like using a completely opaque rule to accomplish something very mundane in a way that works incredibly well)
Würfel Bohnanza; Ganz schön clever - Using the active player’s unused dice in a Yahtzee-style dice game (maybe this happens in some more traditional dice games, not sure)
Schnäppchen Jagd - optional trump suit??
Mamma Mia - memory + unknown information (other player’s hands). Uwe Rosenberg is showing up a lot in this list.
Pax Porfiriana - Players can take an action to speculate on market cards. If those cards are purchased, they money goes to the player instead of the bank.
John Company - promise cubes

Closed economic systems… The Great Zimbabwe, Pax Pamir, and Traumfabrik all slosh money around (mostly) without creating or destroying it.

Giving the majority shareholder sole control of something only happens in 18xx and probably some other train games (and is probably the defining characteristic of a ‘train game’ for some people).

Train games’ mechanics that are common only in train games are going to be a good avenue I think.

Everything about Hanabi is rare.

Don’t forget “rare because they are awful”

Lookin’ at you cheating rules in Illuminati

I’ve never played it. but what about that game you talk about where cheating is implicit, where you chase Dracula through Europe?

Do many other games expect one player to cheat and then handle it when they do?

The Rondel as the former unifying feature of all of Mac Gerdt’s game designs.

The Rondel as the record-holder for number of things that are not rondels that people popularly describe as rondels.

Things that are NOT Rondels: Ora et Labora, Vikings, Tzolk’in.
These update prices or quantities in bulk as a single atomic action. They have nothing in common with Imperial etc.

I only played Seasons a few times and forget most of the rules. IIRC it was rondel-ish.

Seasons has a better claim than anything in my ‘not’ category. At least it’s got the right mechanical bits to be a Rondel (moving a single marker around a circular track) and the space where the marker ends has some global effect on the state of the following round, as well as the general speed of the game.

This one’s kind of mushy… allowing players to select their own victory condition during play. I’m specifically thinking of Antiquity or Pax Renaissance, which require players to expend resources to “turn on” one of a set of possible sudden-death victories prior to achieving them.

In the right conditions, players can irrevocably switch their win condition in Root if they don’t think they can win on points.

ie. the active player is the player who has used the fewest total action points

Deck building as action selection mechanic as in games like Concordia and Rococo.

In the context of roll-and-write games, a shared board that all players write on.