Some game mechanics are common. Drafting cards. Rolling dice. Choosing actions. Worker placement. They are used in many games for a variety of reasons. But what about the weird ones? Ever play a game with a Rondel? Experience the glory of a "Promise Cube?" Wait until we talk about what can only be described as "Bohnanza Hand!" Join the GeekNights crew for a deep exploration of the rarely used (sometimes for a reason) mechanics of tabletop games.

If you want to help us out, go post it on whatever Reddits are relevant!

They get weird at me if I post our videos myself. 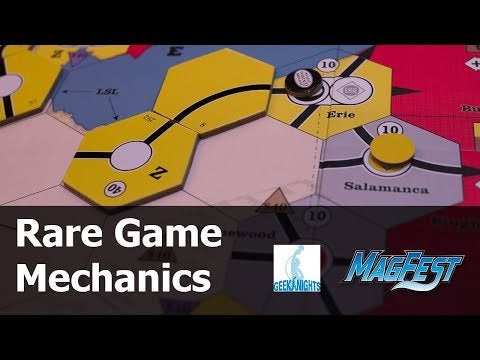 You’ve probably heard of Blades in the Dark—it’s by the same designer as Lady Blackbird—but it uses the flashback mechanics for heists.

The players decide on a job, the GM and players agree on the first major linchpin of the job, and bam—now you’re heisting. No fucking around with planning, and preplanning, and alternate plans, and deciding what to bring, and squandering the session away on shit that’s not going to matter five minutes into the heist. If you need something not on your sheet in the middle of the heist, you take stress to flashback to your character having done the prep for the thing you need right now to get out of trouble.

I still want to see it in play, but I am excite.

I finally got round to watching this panel… and I enjoyed it! Except for the weird mic issues and background noise at the start. I’d say I didn’t enjoy the interruptions by the audience member who wanted to join in, but I actually enjoyed you continually blanking him.

I had some comments about part of it, but I watched it last night and now don’t remember what I wanted to add. Oh well.

Except for the weird mic issues and background noise at the start.

That room was a hell room for recording. The acoustics were awful in a way I’ve rarely encountered, and there was a screaming crowd outside at multiple points. It took me a full two hours to master the raw audio into something listenable.

The “weird mic issues” were partly artifacts of removing some ridiculous background noise, coupled with the mics dropping out every now and then.

It was the most challenging mastering job I’ve had in a while. To put a fine point on it, if I’d recorded this in 2009 as opposed to 2019, I might not have even tried to save it.

As for the panel itself, I’ve made a bunch of tweaks to it to tighten it up, have a few more varied examples, etc…, and I want to run it at a PAX.