No Man's Sky is good now?

Started playing NMS this past weekend. I named my first planet Lichen which is a marshy wetland world. No hostile creatures and pleasant atmosphere. 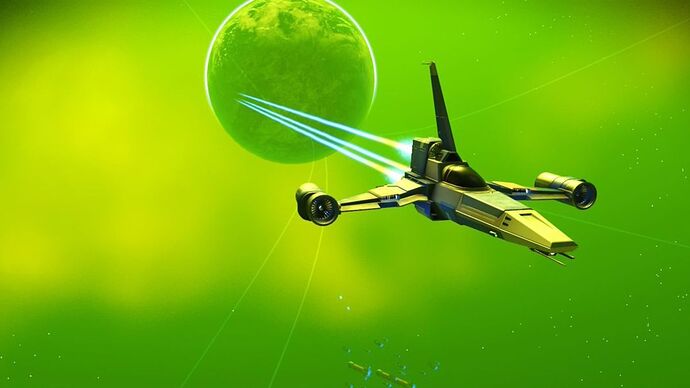 No Man's Sky Is Good Now

To say that No Man’s Sky had a troubled launch would be a massive understatement. Even as someone who generally had a good time with the game then, I had to admit that it was missing promised features and lacked polish. Over a year later, a lot of...

So I played NMS last night. I didn’t like the radiated planted it started it me off on. Tried a few more times, with the game putting me on several frozen wastelands. I finally settled on a toxic sparse forest. The game does look a whole lot better. Items stack in your inventory and the menus for your progress are cleaner and nicer.

Spent most of my time getting my ship back in working order. Forgot about the build mechanic.
And ended up wandering more than I had needed. You can now build signal boosters off the bat. Which makes finding resources a lot easier. Overall it’s a better game. Haven’t tried space combat yet though.

Five hours into No Man’s Sky, and only because a friend convinced me to after saying I was going to uninstall it.

Here’s how that went down:

I only bought it because he said there was a multi player mode and we could do things together. So we google how to meet up, and I have to quit to the menu then join his game. Sure fine.

Then I wait 20 minutes while he gets enough fuel to come visit. And then he lands in this huge ship, and I’ve not even fully repaired my shop yet. I’m still frustrated by the UI, and not doing too well in terms of stress levels.

Once he arrives, there’s nothing we can do together. He has 80 hours in the game, and by this point I have two in total, but only half an hour in that save game.

And all I feel is envy! I can’t do anything except pick plants. He has a huge ship, weapons, photon torpedoes, terrain sculpting tools, all the supplies he could ever need. He builds a huge arch and blows up half of it. He flies around shooting stuff.

The only activity we can do together is him give me stuff I need to repair my ship. In other words: remove the fun experience of playing the game from me. I get a working ship, but it doesn’t feel satisfying.

I say, hey no problem, let me just jump in your shop and we can go somewhere else and explore together. But that’s not possible.

All the while: garbage fire level UI.

It felt like going out for dinner with a rich friend. He’s ordering caviar and champagne, and all I can afford is bread and water. He can plonk down his credit card and pay for stuff, but that’s no fun for me!

In the end I delete all my saves again and start fresh. With knowledge of the UI and systems, can I experience the discovery and exploring and crafting mechanics uninterrupted?

I say: let me play the game for as long as it takes to get my ship ready to fly, and so I can come visit you when I feel ready and we can play on equal terms.

So I do that, and after a while my friend lands near me again, and even though I asked him not to. Then without asking he finishes destroying the rock formation at my base. Which is super annoying because in the drab and indistinguishable procedurally generates landscape, that was the only human designed element near by, and was how I navigated back to base!

He says “just use the beacon on your ship” but I was IN MY SHIP when I got lost, and only flew too far in one direction because I pressed X and brought up the “quick” menu and it cancelled all other input?

This game is so bad, even if just in the UI department, that it reminds of a book I read in 2007. That book was so bad and i had so much to say about it, I decided i needed a podcast of my own to review every book i read since then.

I want to make a video to explain how bad the UI in this game is. I feel it inside me! I can see all the steps the designers took to get to this place, and I want to tell the world how and where they went wrong! It’s too much to write about in this forum… I need to make diagrams and screen shots and…

Instead I think I’ll just uninstall it and request a refund from Steam.

I want to make a video to explain how bad the UI in this game is. I feel it inside me! I can see all the steps the designers took to get to this place, and I want to tell the world how and where they went wrong!

yeah but catharsis though

Turns out I can just chat with my girlfriend about it for a while and I’m all good. All I had to do was sit her down and say “try to start a game… now use the menu…” and she was right on the same page as me in terms of UI. That we both played the entirety of Subnautica together means she’s got a good handle on what that kind of game could be like.

In terms of gameplay, the Subnautica team made the 100% correct call when they switched from procedural environment to full designed world. It’s perfect for focusing the player and their plans.

In Subnatica there was no way to travel in one direction for 30 minutes, only to discover you had to go all the way back to the start place again. You go for a few minutes in one direct and there are too-deadly monster. Too far in another direction and there’s radiation. Too far in another direction and you get lost in a maze of caves. Too far straight down and you run out of oxygen or need better diving equipment. Each one of these barriers made us say “Okay, we need better gear” or “we need beacons so we don’t get lost in the caves” or “make a note of what is in this direction for later”.

In No Man’s Sky there are no barriers. I could just keep walking… and I did. I discovered some dangerous aliens along the way, but nothing seemed to harm me enough for me to worry. Nothing I saw made me think “Oh, I need to explore that way further!” No landmark made me think there was anything more interesting beyond it. The caves didn’t lead anywhere, and had nothing interesting inside them. All the animals acted the same way.

The only time I felt compelled to do anything was through the game forcing me to. I wanted to save the game and googled and discovered I could only do that at my ship. Which took 18 minutes to walk back to.

Discovering I had to walk if a straight line across boring terrain that I’d already covered on the way over, just for the privilege of saving my game without losing all my progress so far?

Maybe the worst video game experience I’ve ever had.

I originally had a lot of hope for the language and monolith stuff to actually be something other than a grind mechanic that it is.

Refund request denied because I played it too long. I should have bailed before playing two hours.

I feel punished by giving a game a second chance when it didn’t deserve one.

The UX was bad, so you had to spend more time using it to realize the game was bad.

How much did it cost you during the sale?

Yes that is exactly the case!

I had to start the full game before being allowed to change the graphics settings, even though I already knew I would put them all to as low as possible. But then to update the settings I had to restart the game. All a pain in the ass.

But I put in some time and slowly learned the way each screen worked. To be clear, the same key does different jobs on every screen. And the same job on different screens is done in different ways with different inputs. Also some screens you can get out of by pressing esc, but many the only thing you can do is right click. At any moment, guess which one!

After giving up once when I found out I couldn’t ride somewhere more interesting on his ship, he convinced me to put in more hours.

And then I could have my real game experience, without being frustrated with the most basic of UI issues due to knowing how to work around them.

And yeah, the game was dull and unrewarding.

It’s the worst money I’ve ever spent on a game.

Oof that’s a bit higher than I thought it would be at, sorry.

I spent more on Black and White.

Edit: I’m misremembering the game I spent more on and hated, because I just looked up Black and White and it wasn’t that one.