We’ve done it. Created a useful radar chart. What a time to be alive!

I used to work for a urban/traffic software company. Shit like this is so close to the norm it is hilarious, oftentimes it was a way to make smaller sets of data seem more meaningful and bloated and to put funds out for projects that are not annual.

Wait, they don’t love you like I love you.

What did they think was going on with Australia and Antarctica in 1587? 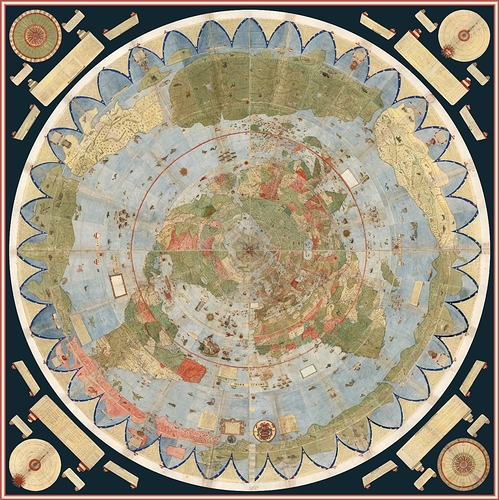 In 1587, Urbano Monte made the largest known early map of Earth. The map consists of 60 panels that were meant to be assembled i

Let’s see you draw an accurate map of the Earth without a rocket.

While it was oral rather than written, Indigenous Australians had songs that were, essentially highly accurate maps, accurate enough that they could navigate accurately between campsites, on foot, hundreds of miles apart, using a combination of land features and stars. Called songlines, many if not most of them are lost, but there’s still some known/sung today - as I recall, there’s a Darumbal songline that crosses nine mobs, spans a distance between roughly Rockhampton and Maryborough(about 400km) in almost shocking detail, I know there’s at least one Elder that still knows it by heart. And suffice it to say, this was somewhat before Rocketry. Or aircraft. Or, after a quick bit of googling for rough dates, the Roman Empire.

I think the point is that when converting things from oral directions or descriptions to drawn lines on paper, that’s when you get funky shit going on like combined continents or phantom islands.

That’s true. Though there is apparently some Indigenous art that, for lack of a better term, encodes songlines into a physical form, I’m not familiar enough to really make any comment on it, let alone interpret it for accuracy, and either way, they’re still not Maps per se, so much as an interpretation of the song(or parts of it), which is a map. Just another interesting note in how humans figure out the world around them.

Philadelphia is exactly as canted as I would expect and the off axis angle streets are pretty common.