[quote=“Dragonmaster Lou”]So the next version of OS X, “Mountain Lion,” due out this summer introduces a new feature, Gatekeeper, which limits what apps you’re allowed to install on your machine. By default, it only allows you to install apps acquired from the Mac App Store and apps that have been digitally signed, though you can disable it and allow it to install anything you want. Of course, this is almost certainly a transition strategy to a future where the only apps purchased from the App Store are allowed.

Shame really… I loved the Macs I’ve owned for the past 10 years or so because they had the best balance of Unix underneath with big time (relatively) commercial support on top and a really nice GUI to boot (at least compared to what was available at the time I got my first Mac). Now it’s pretty much certain that my next main computer will not be a Mac and while I’ll have the most basic MacBook Pro for iOS development purposes (I plan to write iOS apps to make a few bucks on the side), one of the first things I’m going to do is set it up to dual boot Windows. [/quote]

Beginning May 1, 2015, new Mac apps and app updates submitted to the Mac App Store may no longer use garbage collection, which was deprecated in OS X Mountain Lion. Instead, migrate your apps to Automatic Reference Counting, using the migration...

The timeframe was wrong, but Apple is still very much moving in the same direction. Write your apps the way they want you to, or else.[/quote]

I think the message is “Write your apps in the most modern way, or else they won’t work on new releases of our operating system which is removing support for depreciated techniques and technologies.”

This still has nothing to do with non-App-Store applications being blocked in any way. It’s more like dropping support for Power PC chips in favor of Intel, dropping old frameworks, and that kind of thing. [/quote]

Reviving this thread to remind Scrym that the second part of their Mac bet is coming up soon. I had a laugh when I looked at my calendar and spotted this. 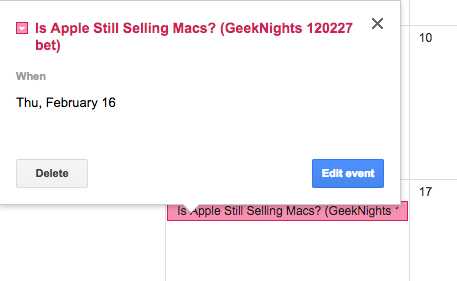 That said, as Scott pointed out in one of the last posts of the last thread, that doesn’t mean Apple will never stop making Macs or that they’ll never get overly restrictive with apps (especially interesting to see how much blowback they got when they announced the new MacBook Pro). Just that the five year prediction was silly and overly confident.

Ha. I remember this one.

Meanwhile, Apple has open sourced its new programming language and the latest MacBook has no proprietary ports.

Mac OS X was renamed macOS, which might be a better title for this new thread.

Edit: Huh, it let me change the title. You can undo that if you’d like.

Also, please include an actual link to the old thread in the new thread.

Fine by me! I forgot that change was official, so it’s best to have it be accurate. Also, added a link in the top post!

It may be “open sourced” but you can’t compile this in any other OS so it’s just bullshit spin that Apple applies to everything it sells.

Open-source Swift can be used on Linux to build Swift libraries and applications. The open-source binary builds provide the Swift compiler and standard library, Swift REPL and debugger (LLDB), and the core libraries, so one can to jump right in to Swift development.

Well that shit wasn’t coming up on Google searches last year when I was asked to lead a group of students in writing a mobile application for a client.
I even spoke to an iOS developer at the time and he was under the impression that it was not possible.
When a class of 300 came to having to write for clients who wanted iOS and Android Apps the options were, buy a Mac or run OSx in a virtual machine or write a native Android app.

I can’t see how all of us would have missed the Open Source version of Swift for the Apple Play Store.

It’s like how you can write Windows and Linux applications in C, but you can’t necessarily build C-based Windows applications in Linux and vice versa. Sure you can use your favorite text editor to write the code on any OS you want, but you’ll still need the APIs, a compiler that produces the proper binary format, etc. to actually write non-trivial full-blown apps.