Laptops in the year 20XX

I need a new work laptop. I’ll be traveling a substantial amount, and I’ll need to do coding on it (read: VMs). I don’t want a mac.

The front runner I see right now is Dell XPS 13. Microsoft Surface book looks nice, but is $$$. Any reason not to get the Dell?

I was trying to find one of those hybrid tablet/laptops that I really enjoyed and while the surface was the best I tried I just thought it was better to go all in one way or the other. My other interest was the Lenovo Yoga (3?) but I know people are gonna poo poo Lenovo these days.

I can’t deny some or the new Lenovo machines look good. If only they hadn’t shipped malware that one time.

If only they hadn’t shipped malware that one time.

Also that other time when the Lenovo line of phones shipped with malware.
They never learned and people keep buying them.

What do you guys think about this?

Cool, but in a concept car way. Would be wildly impractical IRL. Are you actually going to sit close enough to 3 monitors to use the laptop keyboard? What kind of GPU does it have that it’s driving 3 screens? It’s going to need an exhaust port two meters wide!

I did a search regarding color text on Discourse. You need a plugin for it.

According to Linus Tech Tips, it has a GTX1080.

Odds of Scott installing that: lower than me bullseyeing a womp rat from my T-16.

Getting into they am play gods territory.

More specifically, I’m pretty sure the SSD is dying. I think I hit the limit on the storage substrate itself, and it’s having the end-of-life problems that will plague all SSDs eventually.

I’m debating whether I get a new SSD and re-install…
…or just buy a Surface Book 5.

What’s the use case?
If you just want a simple coding machine or work machine replace the SSD.

Did you mean the Surface Pro 5 or the Surface Book?
Both can do all the basics from playing games to design and programming but one is definitely lighter than the other. 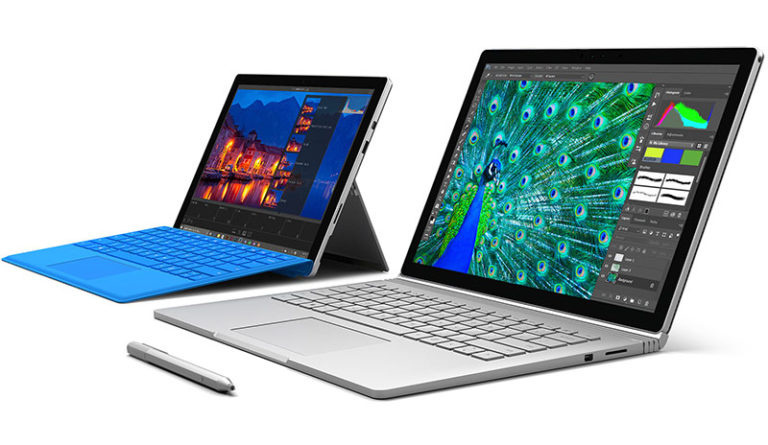 [quote=“rastergrafx, post:6, topic:283, full:true”]What do you guys think about this?

Someone stole it. Holy shit.

Surface Book Pro 5 with the performance base.

I use my laptop as my main traveling PC. Editing audio/video, playing games, running software, etc… I prefer having a small powerful laptop.

Emily is getting the exact Surface Book I would get to be her main PC.

It’s all moot though: I replaced the SSD in the x230 with a giant modern one (the old SUPER EXPENSIVE one was a 128GB baby), clean installed Windows 10, and it’s good to go. I might even up it to the max 16GB of RAM (from 8) and keep it several more years.

If anyone plans on getting a surface, I suggest waiting until 6 months after release. That’s about how long it takes for Microsoft to work out the majority of release bugs.

Never wait. Just get the thing. 6 months of using a slightly buggy better thing is worth it.

I just got the Surface Pro 4 at work. It’s quite buggy. Some of the bugginess is because of stupid policies that IT put on the domain, but the IT guys all have Surface Pros also, so they are suffering under their own poor decisions as well.

The only three major bugs I’ve encountered are as follows:

You can say that, but when I bought a new surface pro, I lost an unquantifiable amount of work due to crashing and a bug that prevented Windows from using the proper display when waking from sleep. My graphics card died within a month and I had to replace whole device.

Coming from an Apple environment, I expected a unified device to be more consistent and released with more thorough bug testing. It took Microsoft 6 months to fix the wake from sleep issue, and they rolled out the fix incrementally. So I ended up having to enable hibernation (not as easy as it used to be) instead of just sleeping my device. Also, the way that Windows interacts with the device is awkward and doesn’t take advantage of its best features.

I just think they have a long way to go.

Also there’s some weird bug where I was only able to type whitespace, punctuation, and “I”. I assumed it was Donald Trump view.

It seems like the Surface Pros have the lion’s share of the problems. The Surface Books, being more traditional laptops, seem a lot more in line with my expectations on the reliability and functionality of any laptop.