You know him from Passage, Sleep is Death, Castle Doctrine, or Cordial Minuet.

He’s got a new game out: One Hour One Life
https://www.youtube.com/watch?v=mT4JktcVQuE

Seems… interesting, which is in line with the rest of his games. I don’t know that I would play this, but in a year or two I would sure like to watch a documentary about it.

Like most of his games - I am wanting to buy it but I am not sure if I am wanting to play it yet. I think it will be interesting to watch two or three people work their way through it on a private server after it is done.

I do like he is even putting the negative reviews up which are pointing out some problems currently. 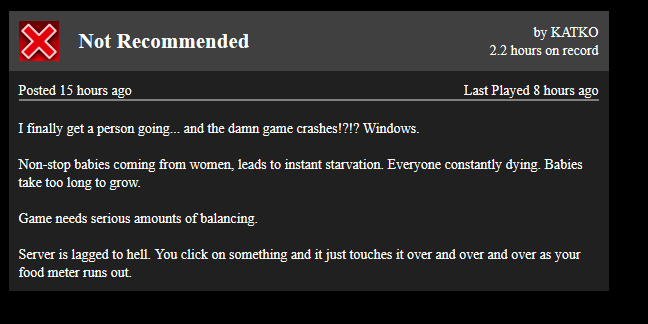 Tons of crash issues on Day 1. He put out a Day 2 patch and I haven’t had a single crash since.

I have put 3-4 hours in and there is def progress already. On Day 1 it was just rubbing sticks together, but on Day 2 I was finding little camps where folks had made basic tools before dying.

Does anyone play One Hour One Life? Is the game even alive any more?

It’s very alive with constant updates. I get emails about it all the time, but I haven’t played since the early days. I would have to learn so much in order to jump back in, and I just don’t have time.

We could make our own private FRCC server, and then nobody has to relearn anything right?

Now I have two problems

I didn’t know the server was available for other people to run.

Also, you need a critical mass of people to keep the game alive.

You also get access to the full source code, including the server code. Technically-minded folks can run their own private servers, or even use the powerful content editor to make their own mods.

Is it literally you need an unbroken chain of people playing, hour at a time, or the world dies?

No. The way it works is you spawn and start with nothing. You slowly build stuff up. But you only have an hour before you die. If you respawn from nothing as a new mother, you will spawn in a new spot on the world and have to start from nothing again. You want to respawn in the same spot to keep progressing and building up your society. For that to happen you need people who are there who are female who will make babies. The map is huge. The one on the main server is several times larger than the Earth’s surface.

If you only play once in awhile you won’t have people consistently in the same place long enough to build up a society. The world won’t die, you’ll just be playing the beginning of the game on repeat. You’ll have sticks and stones and fire, and that’s about it.

The tech tree is nuts
https://onetech.info/

I played a lot in the first two weeks. Learned up through clay walls and such. I mostly found myself doing a lot of rabbit trapping and clothes making. Was a good time but like Scott said, the rules of society and the advancement up the tech tree require you to be plugged in all the time, or your knowledge of how to play will be stale and useless.

Right, if I spawn in a place with radios, I’ll have no clue what to do.

Partially thanks to auto-chess I’ve re-cemented my dislike of knowledge-based games. It’s fine to have a complex and varied set of things. Wingspan has an entire deck of unique bird cards. Civilization games have huge tech trees. But neither of these games have any demand on players to memorize those things in any way. You read the bird cards that come up. You have all the time in the world to read the tech tree when choosing what to research.

In Auto Chess with it’s real time nature, you are at a huge disadvantage if you haven’t memorized all the units, their abilities, the race/class synergies, the item combinations, etc. Same with One Hour One Life and Minecraft. You need to memorize an entire flood of crafting recipes to be effective.

What’s really sad is there’s no reason the memorization couldn’t be removed from the game entirely. For example, if I made OHOL and a new player wanted to make fire. I’d provide a handy UI where they could search for fire. Clicking on fire would show the ingredients for fire. I would even automate it such that if all the necessary things were available nearby, a player could simply click on the fire and their character would automatically run around, gather the necessary things, and start the fire with one click.

FYI, turns out Jason is a milkshake duck. I will be avoiding any game he’s attached to in the future. 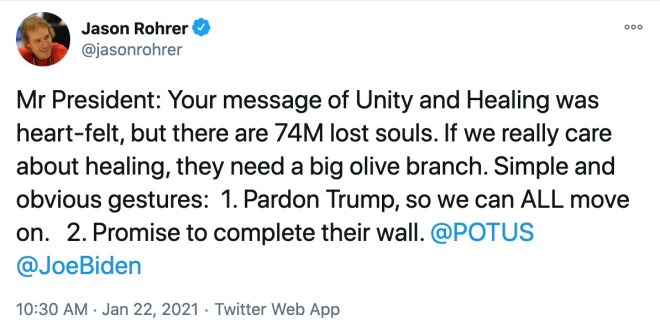 One of my favourite old podcasts is a short-run series called A Life Well Wasted. It’s super well written and produced, and there’s only about 10 episodes to catch up on.

Episode 3 “Why Game?” features Jason Rohrer for a big chunk, and he shares his story and outlook. As the episode notes say: “an eccentric, forward-thinking game designer who lives sustainably with his family of four on $14,000 a year”. By 2009 it’s very clear he’s already deep into the world of conservative talk radio, etc.

For you it might be a milkshake duck situation, but one of the reasons I’ve not played any of his games is this podcast episode I first listened to in 2009. I understand that you missed it, but he hasn’t been shy about views or influences.

Oh snap. I do recall a podcast by that name, but don’t remember if I listened to it.

It’s a very good podcast. I listened through all the main episodes again last year, for the third time in total, and about 8 years since my last listen.

It holds up remarkably well. The “big ideas” episode is one of the only podcast episodes ever to make me cringe, laugh, and also cry with the emotional impact of one of the sections.

It also talks about loads of ideas that are now part of gaming, but we’re also very experimental back then. One professor describes what future gaming might look like when everyone is connected via mobile devices, and it’s remarkably close to what Pokémon Go actually became.

And the guy who licensed Tetris to Nintendo also talks a good “Elon Musk” style talk about making humanity multi-planet for future redundancy, but comes off as inspiring rather than insufferable.

The whole series is highly recommended, though the first episode is weirdly backwards-looking for an otherwise forward looking podcast.