I use to have those exact ones at work. They were pretty terrific and were very comfortable. The problem is that the headband broke, and I couldn’t repair it. The other thing is that they are only good for situations where you are sitting still, not good for walking about or exercising. If it weren’t for the fact that they also lack noise cancellation, I would have replaced them with an identical pair. But since that’s an essential feature, I bought the Bose Quietcomfort instead.

Yeah, the Bose are overpriced and sound quality and whatnot, but the noise cancellation was better than all the other models. I really don’t want to sit with isolation plugs in my ears all day in the office, so active noise cancellation was a must. I probably would have gone with the wireless model, but that’s actually pretty new. They didn’t have it when I bought them.

The other thing is that they are only good for situations where you are sitting still, not good for walking about or exercising.

Really? I use them all the time when I’m moving about: grocery shopping, on the elliptical machine, running around at conventions. Never had a problem with them in active scenarios.

I wear my Level Overs all the time walking, they’re fine. I wouldn’t go jogging with them on I guess, but more cuz of weight and perspiration than because they wouldn’t stay on.

If I get new headphones they’ll either be to replace the Level Overs with the new Sony Wireless ANC cans, the Bose QC35, or an equal amount on good closed-back wired headphones for use at my home desk when I can’t use open-back.

My problem with the Bose QC35 is a lack of touch interface on the cups. Music control is with physical buttons. That’s probably a plus for some, but I like touch gestures.

I bought some older studio Beats on clearance last fall for $65, and I’m happy with them, but I definitely wouldn’t spend hundreds of dollars on them. Sound quality is definitely good, but there are a few things that annoy me about it, mainly the noise cancelling. You can’t turn it off, so if you just leave your headphones plugged into the cable it’ll be dead when you come back to it. It charges really quickly, but come on guys, why not just have a switch? Also, the fact that you can hear the noise cancelling bothers me but when you have something actually playing though them it’s fine. While the build quality on the Headphones themselves seems fine, the cable seems kinda shoddy. It came with two, and the one with the mic just fell apart at the controls. All that being said, I still like them a lot, but if I was spending hundreds on headphones I’d probably just get some higher end Sennheisers or something.

I use both - Sometimes both at the same time for gaming while listening to podcasts. I don’t stick with any particular brand with any of them but I have a bit of a secret when it comes to earphones which works in Europe. Getting extended Warranty on earphones means I have only paid once in the last 5 years for new earphones since they always break within the warranty period.

I replace the silicone covers regularly and filters whenever they get dirty (once every year to 2 years since I clean my ears once a day).
I put them in the pouch they were provided with otherwise let them lay out uncoiled at home.

My Beyerdynamic DT880s (read as big headphones) are still my primary headphone, 7 years running at home.
I also bough a pair of Hifiman HE400i over the Christmas break because they are great and were selling for half their normal price on Amazon (plus I wanted some planar magnetic headphones).

I will probably get some Audio Technica A1000z for work as when I have canal phones in and the development team breaks out into discussion or I need to talk to a tester, it can be a bit annoying for both parties while I take time removing them. Plus my 2 head phones at home are both open back.

When I used speakers they would be too loud for the neighbours (I was living in an apartment at the time). So I switched to headphones and canalphones for personal use as I seem to be the exception to the rule in that I don’t destroy my audio gear

I used and I recommend the Jaybird 3 for running, and working out in general, they are cheap, sweat resistant, and the battery will last you at least 8 hours.

Hm. It’s been about 4 years since I got my hearing aids, which is long enough for the insurance benefit to renew. Oticon’s got a couple of new products that allegedly have better sound streaming quality, and that don’t require some extra physical dongle to stream sound.

I published my BeatsX review (which was the reason I started untangling my broken Earpods):

I can’t wait until I can get bone conduction headphones where I can just stick two tiny little probes on and leave there semi permanently.

Doesn’t really help you block out or dampen ambient noise.
I’m waiting for the neural implants.

I just bought the new Sony ANC headphones because people at work are cranking my misophonia up to 11. But for everyday use, I have had the JVC HAFX40As for 4 years no problem. Granted I also crocheted them to reduce hot spots and keep them from tangling. 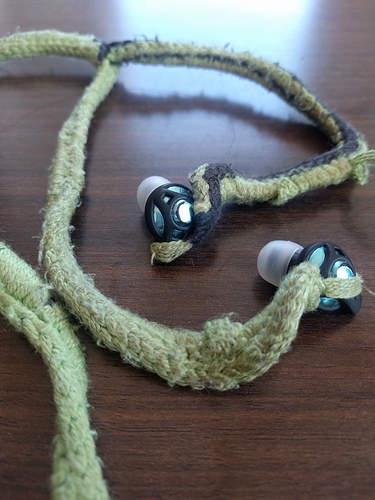 So my new Sony MDR-1000X ANC headphones just arrived. I’m a bit disappointed, honestly. The sound quality is decent for ANC, but the headphones hurt. The edges of the cup dig into the pressure point in front of my ear, and I took them off after an hour. Really not worth the touch controls.

Maybe I’m spoiled by my Philips SHP9500 (which are extremely comfortable, just open air and not portable at all), but I’m probably going to return these and get the Bose, sound quality notwithstanding. I had good experience with their QC line in the 90s, and my co-worker is going to let me try hers.

Unfortunate, the Bose sound quality is pretty trash compared to what I’ve heard when comparing the MDR-1000x.

The Philips are pretty comfortable but doesn’t mean you should ever forego comfort in a heapdhone. Comfort should be number one.

Bose sound fine, they just do the same thing that everyone else tries to do when making consumer headphones, which is try to force the sound into a “sweet spot” for consumers. If that’s what you’re looking for then Bose is probably one of the better brands despite their high price point.

Personally I wouldn’t choose wired headphones from them because they don’t produce the sound I’m looking for. But I have some wireless on-ear headphones from them as well as one of their portable speakers and they’re pretty nice. Especially the wireless headphones. They sound leagues better than most other options I’ve experienced. The portable speaker is the best I’ve heard if you’re looking for portability. They’re also incredibly durable.

It just sort of depends on the situation you’re in.

So my Etymotic ER4PT cable finally gave up but Etymotic have upgraded the entire ER4 (their top tier / professional line of IEMs).
I thought about just getting a new cable however I thought I might give the new ones a try since the previous pair had survived since 2007, I mean that’s a pretty good decade run.

I got the ER4XR, the imaging and resolution is pretty amazing with some great sound stage for IEMs (actually surprising when it happens, sounds closer to an open back headphone for some tracks due to the recording and depending on what I’m using for the source). Build quality is great again, way lighter than before, made of aluminium casings where possible rather than plastic. Just a kick of bass.

With the quality of service and commitment to owners of their headphones, it’s great that companies exist who will give their devices services for as long as they produce the earphone (the prior model I had were around from 1991 to 2016, effectively 15 years of support).
Can’t speak highly enough of them and the product they produce, plus the prices.

I did consider getting a bluetooth set of headphones but after trying them out the difference in sound and heaviness plus bothering with battery etc is just enough of a hassle to stick with high quality IEMs.

Edit: Just switched some Rage Against the Machine on and it’s the first time I can clearly hear every single word that Zach de la Rocha is saying without concentrating. Bopping my head to a song I didn’t rate too highly before but now love Snakecharmer.

My current headphone situation for commuting.

Delivers satisfying volume and bass. The DAC has a few built-in capabilities that I haven’t made use of yet. Also use it for my laptop sound now too. May start using it’s recording features for game streams.

The need for an external AMP seems a bit ridiculous.