Tonight on GeekNights, we consider Superman. The Superman. Supes. This character casts a long shadow on global popular culture and storytelling, a modern myth. In the news, the Harley Quinn show is great, Lupin III Part 6 has Mamoru Oshii as a guest writer, Adventure Time: Distant Lands concludes with Wizard City, Keiichi Arawi has a new manga coming, and (spoilers) Lex Luthor finally gets it.

I couldn’t have written it any better myself.

When someone recently asked me if there is a good entry point to reading Superman, I gave them two graphic novels and an animated series.

First, All-Star Superman by Grant Morrison. While Morrison does tend to get a bit exotic with stuff he writes (Zenith, The Invisibles), this is a wonderful love letter to the silver age era of Superman. In fact, the scene Rym was talking about in the podcast is from an animated adaption of this graphic novel.

Second, Superman for all Seasons by Loeb and Sale. Using a similar theme to their other work, Batman: The Long Halloween, this is a look at the very early days of Superman. Wonderful artwork, and a look at how his adoptive parents shaped The Man of Steel.

Finally, Superman The Animated Series. By the same team that made Batman The Animated Series, it does a good job of going “back to basics” with the mythos of Superman. Just like Batman, there is a mix of good and bad episodes. My favorite one has to be “The Late Mr. Kent”. Where Clark Kent is ‘killed’ and Superman has to not only solve the case he was working, but how to cope with the loss of his secret identity. While this is obviously resolved being a 30 minute cartoon, it’s a wonderful look at how much Superman relies on his secret identity.

The Super Animated Series is great, and All-Star Superman and Superman For All Seasons are both excellent. Definitely classics.

Personally, if someone wants an entry point to reading Superman, I recommend Superman Birthright, which is literally a retelling and modernization of his origin story. It sets the table with superman, providing all the basic Superman facts, setting up the major characters (Clark, Lois, Jimmy, Lex Luther, etc.), and is everything you need to know about Superman in one book.

While All-Star Superman and Superman For All Seasons are both amazing books, and should belong in anyone’s Superman collection, they’re both out of continuity and a little weird. They do an excellent job of giving a sense of who Superman is, but I’m not sure they work so well on their own, without any prior knowledge of the character. 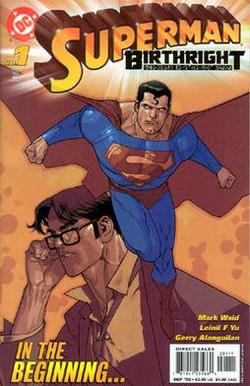 Superman: Birthright is a twelve-issue comic book limited series published by DC Comics in 2003 and 2004, written by Mark Waid and drawn by Leinil Francis Yu and Gerry Alanguilan. Originally, this series was intended to be a non-canon version of Superman, showcasing his origin and updating him for the 21st century. Soon after, it was decided to adopt the series as canon, and thus it replaced John Byrne's The Man of Steel series as Superman's canonical origin story. This editorial position lasted...