Tonight on GeekNights, we consider fruit (except apples). In the news, someone figured out how to dispose of old TVs for free, China's bot game is mad weak, Youtube's takedown policies have changed for short musical clips, and Scott has some chair woes. Also, Grapefruit.

jabronis didn’t even talk about figs. Further more requesting followup episode on dried fruits since dried fruits were not covered.

I could talk for an hour on dried fruits alone. Multiple hours if trail mix is in the mix.

Figs are my jam. Dates too

…Contrary to popular belief, ripe figs are not full of dead wasps and the “crunchy bits” in the fruit are only seeds. The fig actually produces an enzyme called ficain (also known as ficin) which digests the dead wasps and the fig absorbs the nutrients to create the ripe fruits and seeds.[5] Several commercial and ornamental varieties of fig are parthenocarpic and do not require pollination to produce (sterile) fruits; these varieties need not be visited by fig wasps to bear fruit. 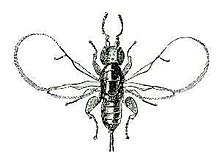 Among the Agaonidae, the female is a normal insect, while the males are mostly wingless. The males' only tasks are to mate with the females while still within the fig syconium (inverted flower) and to chew a hole for the females to escape from the fig interior. This is the reverse of Strepsiptera and the bagworm, where the male is a normal insect and the female never leaves the host. The non-pollinating wasps have developed impressive morphological adaptations in order to oviposit eggs inside the...

Can Figs Exist Without Wasps? | Ask A Biologist

Figs Without Wasps? Most commercial figs, like the ones you buy at the store, are grown without wasps. While wasp bodies may add some crunch to a tasty fig, you probably won’t find a wasp inside a

As of last week I have a fig tree/bush thingy in my yard. Unlike the commercial varieties, it’ll definitely have the wasps. Anyone in queens who want’s to pick and eat a fig is welcome to do so. The other burroughs can come too, I guess. Except staten island.

Yeah, that’s why I put “potentially”.I just find it to be a neat fact many didn’t know.

Just love sharing that because I’ve encountered so many people that think the fig seed hulls are bits of wasps/wasp eggs.

We have two fig trees - one in a pot, one in the ground. We’ll see how they do! One is already being an overachiever and producing tiny figlets.

Fig jam is the best form of jam.

Of the things on that list, I can have ricotta right now.

Once I’m done with this keto shit though…hide yo figs.

Once I’m done with this keto shit though…hide yo figs.

Way ahead of you. I not only hid them, I also turned them into poop, so nobody will even want to steal them now.

We got all varieties of fig bars in the pantry recently.

Not eating meat means I had to give up prosciutto. That along with meats for breakfast sammiches have been the hardest part.

After three years of selling convincing plant-based burgers, Impossible Foods is on the verge of releasing its next product: sausage. We first learned about and tried the product during a trip to Impossible's headquarters in Redwood City, CA --...

So I think their burger perfectly approximates that mass market beef cooked fast taste so I have hopes that their breakfast sausage patty will similarly fit the same kind of flavor profile.