Tonight on GeekNights, we talk in an ultra generic sense about amusement parks! In the news, the Alamo in San Antonio is a terrible tourist trap, Westworld is pretty good, and Ayumi Hamasaki's hearing takes a tragic turn for the worse.

The Alamo is perfectly fine as long as you drink two margaritas beforehand.

I haven’t listened to this episode yet, but I’m pretty sure I could make a game of it and do a shot every time Rym mentions Cedar Point.

This is for @Apreche here is the history of Seasme place including the arcade/computer exhibit you mentioned.

[quote=“UncleUlty, post:3, topic:737”]
I haven’t listened to this episode yet, but I’m pretty sure I could make a game of it and do a shot every time Rym mentions Cedar Point.

[/quote]Cedar Point has one major problem.

If you ever experience it, any other “roller coaster” park on Earth feels like cheap crap.

I have had terrible luck with amusement parks. I went to The Great Escape in Lake George twice and Disney World once. Most of what I remember about the first time at Great Escape and Disney was my six year old sister being a little shit the entire time, though that was how she was all of the time at that age. But anyway inordinate amounts of time were spent with my parents dealing with her and not riding rides.

The second trip to Great Escape was part of a physics day thing in high school like @SkeleRym mentioned in the show. I was grouped with four dippy sixteen year old girls from my class who were too cool to ride rides and spent the whole day not doing the group assignment (which I did by myself so I wouldn’t get an F) and gabbing amongst themselves at a picnic table. I tried to sneak off and join my friends and maybe have some fun but somehow a teacher saw me by myself and gave me a heap of shit for “slacking off and not staying with my assigned group.” and all but frog marched me back to the girls. So I spent an hour and a half on the bus each way and about four hours in the park doing what amounted to homework because they wanted us back at school to go home on the bus at the normal time.

Real question: Have you been to Six Flags Great Adventure.

It doesn’t beat Cedar Point. But it is a legitimate contender. You should hit it before/after one of your Wildwood excursions just for the quality and variety of the roller coasters.

If you want a roller coaster experience that will physically hurt you, try the superman-position ride at Coney Island (a ride where you are held flat, chest down, looking up/forward in the direction of travel), then follow that up with a ride on the Cyclone. Either would have been okay individually, but in that order after each other? Fucked up my neck real bad.

I was there with a friend, and we both agreed we wouldn’t have gone back on the Cyclone again right away, even for free, which was a new experience for both of us. Normally EVERY rollercoaster ride, I want to try it out again immediately.

I also rode The Mantis when it was still a standing coaster, long story short Mantis + Cerebral Palsy = constant leg stretch and the worst 2 minutes of my life.

My brother went once and said this exact thing for years.

I would never, ever ride the Cyclone again. Tried it in 2007 and it felt like a concussion machine. Spent the whole ride using every ounce of energy I had to keep my head from slamming back and forth, side to side against the barely-padded braces.

I have never ridden the Cyclone, but I know it is bad news. It’s notable only because of its old age.

It’s notable for fucking up my neck.

The last remaining “fuck up your neck and head” ride at Cedar Point was the Mean Streak.

Mean Streak or Meanstreak may refer to:

Crazy long (over 3 minutes) and, when it was built, world-record-setting. Dinn, as far as I know, only made similar coasters, and were never a major player in coaster design. They’re long defunct.

It fell increasingly into decline due to the extreme difficulty of maintaining slat rails on such a large scale. It’s currently being torn down.

Makeover of Mean Streak coaster under way at Cedar Point

Work began on the coaster not long after Mean Streak's "funeral" in mid-September.

The important part is that people spotted steel track (the metal tubes that most modern coasters use, as opposed to flat train-like rail slats), implying that it’s being re-engineered as a modern coaster.

There are other things to do besides the River Walk and The Alamo in San Antonio. You would have to drive to them though. There is Six Flags, SeaWorld and the San Antonio Zoo. All of which you could use up a whole day doing.

Last one for San Antonio. Go to Lulu’s Bakery Cafe for the World-class 3 lbs Cinnamon Roll. Afer you eat that you will be in a sugar coma for the rest of the day. One and done.

I dunno. PAX East has Attila the Bun, but that one does look pretty good 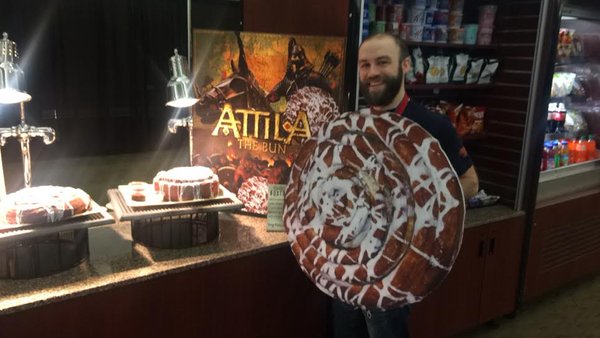