Tonight on GeekNights, we consider the concept of lock-in in technology. From platforms to software, app stores to physical connectors, it's actually a fairly complex topic. In the news, reason 499 not to buy a Tesla, Facebook collapses in the manner we have always expected, and Facebook is in trouble in Europe.

I’m kind of locked in to using electricity.

When are we going to invent photcity.

Facts. You can rarely choose your utility provider. It’s just locked in based on where you live.

I guess I just log in here roughly once a year to comment on stuff I know about. This time electric cars! I’ve had mine (Chevy Bolt) for 3.5 years, it’s basically better in almost every way that matters than any Tesla.
Power usage isn’t terribly intuitive. My car has heated seats and a heated steering wheel, each one is probably 10-35W so even with everything on that’s going to be <200W vs an average of maybe 1500W to run the heat + blower. Basically with the exception of heat most “comfort” things are pretty trivial compared to pushing a car around. C02 emission break even vs a gas car is generally 20-75k miles travelled depending on where you source power from (even coal power + EV is better than gas eventually) But obviously an ebike or similar is just comical how much better it is in almost every way.

My guess is that Tesla cheaped out on something like they usually do and that messing with the seat a lot will cause it to break. (either due to overheating or mechanical wear over time)

In PA the servicer is defined by location but whom you buy the power from is an open market. So PECO will always service my power infrastructure where I live in in Philly but I can buy power from anyone over PECO’s wires.

We can do that also, but just about every choice other than Con Edison is a scam. There are even scammers that go around knocking on people’s doors pretending to be ConEd tricking them into switching to paying them. 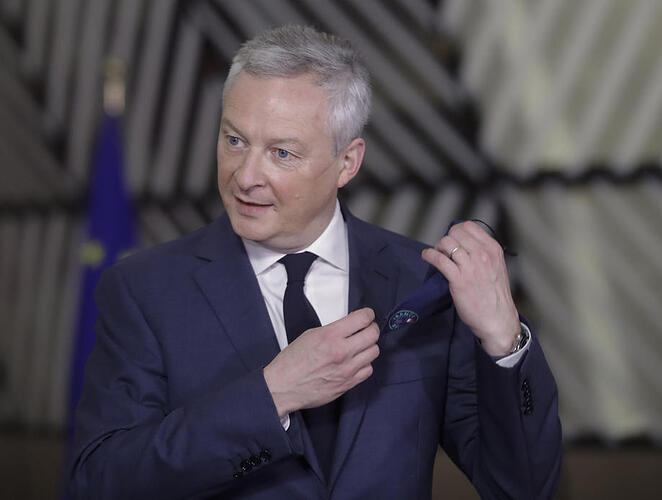 German Economy Minister Robert Habeck and his French counterpart Bruno Le Maire seemed unimpressed on Monday (7 February) by digital giant Meta's threat of possibly withdrawing Facebook and Instagram from the EU, repeating that data should not be...

I heard that people become a fan of whatever modern electric car they first experience. Quiet, smooth ride, exciting acceleration, etc. For a long time, a Tesla was most people’s first electric car experience, so they assumed those things were qualities of Tesla’s cars in particular.

Turns out, something like the Porsche Taycan has all those qualities, plus the all the “actually designed and made by established car manufacturer” qualities. That would be my electric car of choice right now.

Except, who am I kidding, I’d probably get an electric Ford Transit.

Volvo plans to have 50% of their cars be hybrids, and the other 50% to be pure electric by 2025. The idea of an electric Volvo really appeals to me and I might start taking a serious look at them in 2027-2028 when the first models start coming off leases.

Enjoy the clean power of our electric cars, hybrid and mild-hybrid technology. Our cars give you a powerful and emission-free driving experience. See more.

Honestly, I feel the same, the only qualm I’d have about an electric transit would be that heavy loads shorten the range(a universal across all electric cars, of course), and I’d like to see the impact on the transit before I bought one. Not a dealbreaker, but I’d like to know.

That’s true of gas/petrol or diesel too, just maybe less so than electric, for now.

Well, the difference is that we have a lot of infrastructure for gas filling stations, but not electric charging stations. Also, the energy transfer rate of gas is very high. It takes just a few minutes to full up a tank. Charging all the batteries to full takes awhile even with the best car and best supercharging station.

So even if you carry a heavy load with a car, you can safely travel any long distance on roads without much worry about running out of power. You’ll just have to stop for gas more often, but that gas station will be there for you. Electric car, you still have to plan your trip carefully, and that extra weight could be the difference between being able to reach the next charging station or needing a tow.

Very true. I’ve been stranded twice in my electric car, once due to poor planning and once bad infrastructure.

Did you know some electric vehicles can charge themselves by being towed? So if you’re running low on battery, you don’t need towing to a charger, you just need towing to… along the road. 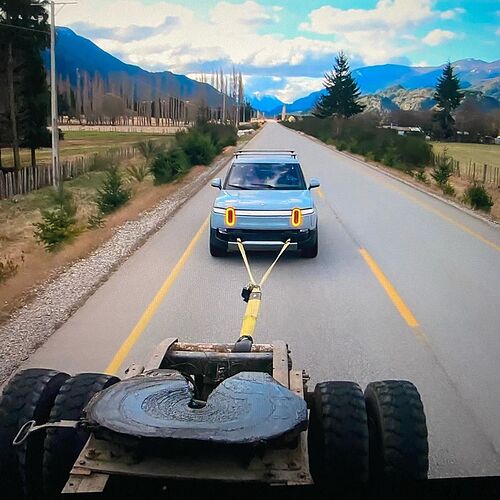 I found these photos from the Long Way Up on Instagram, does this mean that the R1T and R1S are able to handle tow charging?

That’s true of gas/petrol or diesel too, just maybe less so than electric, for now.

I mean, yeah, but the difference is that you can build for it. I used to get fantastic mileage in my van carrying anything up to a ton half in the back, practically indistinguishable from empty, because it was built for it in a way that the Electric transit isn’t - namely, it had running gear that emphasized power over speed.

But you don’t have that in an Electric transit, because they rely on the good old 100%-torque-from-0-throttle business to get the load moving. Unless we move away from the current system of motor-per-wheel and over to a central drive motor being distributed for some applications, that’s gonna be a much, much bigger impact on electrics than gas.

Like, for example, a mate of mine was towing a trailer with his Tesla while moving to Seattle, and it practically cut his range in half. If you lose half a tank of gas vs normal use towing a trailer in the overwhelming majority of petrol cars, that’s not expected, your car is broken.

We have a bank of chargers at work so whenever we get our next car it will probably be electric (though it wont be for 2 years at this point before my wife’s lease is up). We might have a 2nd kid at that point which means something like the VW new Microbus or ID.4.

I’m currently of the opinion that the best long haul solution for EVs is something like a pantograph / overhead lines. I could get away with half the “range” I have if highway driving recharged / didn’t use battery.

Over time I’m becoming more and more opposed to buying new consumer products so I’m pretty sure our next car for the household will be the guts of an old Nissan Leaf transplanted into an old truck body (whenever our '99 Tacoma dies). Based on how we drive the Tacoma I think it would never need to plug in as long as we park it in the sun and can mount >350W of solar panels to it.