How big a problem is fake medicine?

It's a $34 Billlion problem. Imagine if that money went to researching real medicine instead.

A real victory against fake medicine

A real victory against fake medicine! The British Medical Association (BMA) has voted to stop offering homeopathic treatment on the NHS.

The FDA is actually going to do something good? Not looking a gift horse in the mouth, just surprised. Of course, it doesn’t go far enough, but I’ll take it. 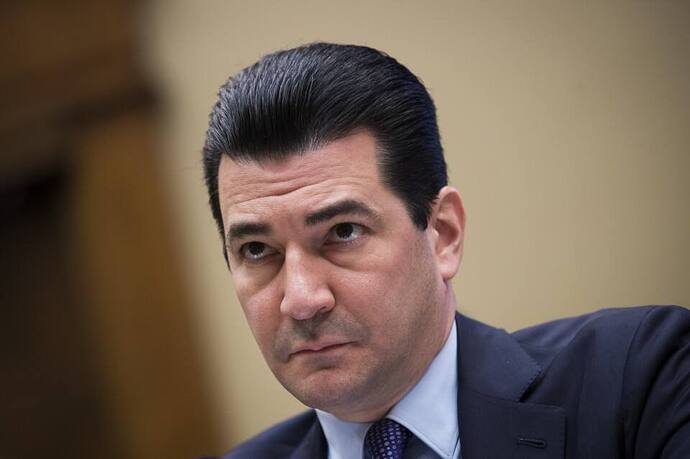 Products containing potentially harmful ingredients or marketed for serious diseases will get the closest scrutiny.

I’ve always wanted to do that like with some garbage surely in my moms cabinets. Problem being it’s not really knowable at a glance so you’d have to prepare to do it ahead of time… Which I’m not prepared to do.

There’s also a percentage of “homeopathic” medicine that actually contain real drugs so you have to check before pulling that stunt.

It’s sad that “FDA decides to do part of their job” is a noteworthy headline, but I’ll take it. Not sure if it offsets adding pseudomedicine to VA services though.

In a recent episode Scott talked about back pain, and how little you can do about it. This leads to people going to ever increasingly randi-bullshit people until they find some kind of relief.

When I had a trapped nerve in my spine, I met someone who had had a similar problem. For them it got so bad, and they kept trying more fake medicine solutions, until they went to see a hypnosis. At first I thought this was going to be a basic pain relief hypnotism story, like the stopping smoking stories.

But then she said that she was taken back through past lives until the hypnotist found someone who had been stung by a wasp on their spine.

In a past life you were stung by a wasp on your spine. And she accepted that.

I can’t remember what the result of that story was, and how it helped her. But at the time I was in SO MUCH PAIN that was lasting for weeks and weeks, that I knew how someone could come to the point of trying a hypnotist and believing such a diagnosis. I was a physical and emotional wreck! It would have taken very little to tip me over into all kinds of bullshit medicine. Not homeopathy or acupuncture or hypnosis, but there are all kinds of back stretching contraptions that cost a lot and probably have just as little science backing them up.

This is why in order to protect people from themselves, it must be completely illegal to sell or promote any non-real medicine. People who use it aren’t bad, they are victims. Most of the time the people selling it aren’t evil at heart either. They truly believe they are helping others. The problem is that it is a many-billion dollar industry, that is not acceptable.

A great new online course became available. Too bad the only people who will take it are people that don’t need to. 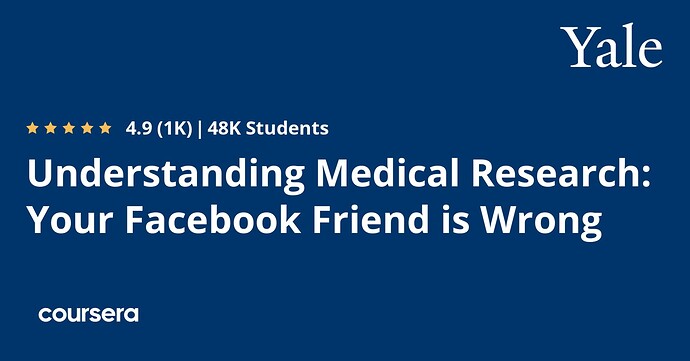 Offered by Yale University. How can you tell if the bold headlines seen on social media are truly touting the next big thing or if the ... Enroll for free.

We will never be free of disinformation campaigns until researchers understand it is their job to make findings interpretable to the layperson and not the other way around.

In a society with ever increasing access to knowledge and primary sources, it pays to be conscious of how what you publish will be interpreted. It is obviously infeasible to expect every person to be an expert of epidemiology, but if the research an epidemiologist is performing will have a direct impact on people’s lives, they will have a desire to interpret it even if it is beyond their comprehension. If effort is not made to improve its readability then misunderstanding and disinformation is an inevitable result.

I wouldn’t say there is a moral imperative that researchers focus more on outreach, but if they do not pursue it it isn’t the fault of “stupid people” that disinformation campaigns arise. If your response to public panic is to blame it on the people panicking it only reinforces their own faulty beliefs.

Really the question comes down to who is responsible. I think it’s natural to blame the researchers and scientists for not doing messaging that well, but as always, I blame “the system”.

You see, back in the day (not actually that long ago) there was this thing called journalism, and it had at least slightly more integrity than it does now. When studies came out, the headlines were a little less crazy and a little closer to the truth. Scientists didn’t have the job of controlling messaging, it was someone else’s job who did it somewhat well. That job has just been eliminated.

Also, we’ve seen the passage of laws, mostly the DSHEA in the early '90s, bring about the insane industry of fake medicine. This shit used to be straight up illegal. Before DSHEA you couldn’t have homeopathy on the shelf at CVS claiming it was “for flu symptoms.” You also couldn’t have jamba juice claiming to “boost immunity”. Deregulation created a multi-billion dollar industry of fake medicine. A large amount of that money has been reinvested into a war on medical disinformation in order to protect and enrich itself.

And on top of that, you have the Internet, that let any old crazy person publish whatever crazy nonsense they like. And you have the platforms on which people publish their crazy nonsense, YouTube, Facebook, Twitter, email, etc. barely even try to stop nazis, let alone quacks.

And then you’ve had the same system continually undermine the quality of education that people receive at all levels.

Can scientists do more? Probably. But I’m not going to blame them for a world gone mad, or burden them with the responsibility of fixing it.

Like all problems, there’s no silver bullet. The whole thing is fucked, and you have to fix it all. 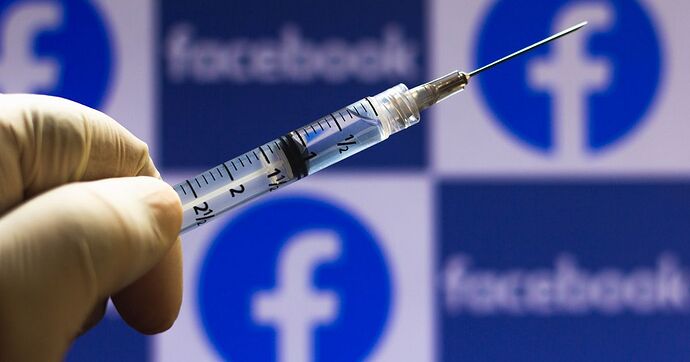 12 people are behind most of the anti-vaxxer disinformation you see on social...

The "Disinformation Dozen" are spreading anti-vaccination content throughout the internet.

Almost all the anti-vaxx disinformation online originates from just 12 people. If Facebook, Twitter and Instagram just ban those 12 people, the entire thing will probably just go away.

The obvious question comes to mind. If 12 people can do that, why don’t we get 12 people together to spread good information? For one, these 12 people have large followings. They also spread disinformation as their job. And of course, their disinformation is very tantalizing. Much like COVID, it spreads much more readily than boring old factual information.

Even so, I wonder what could happen if someone hired 12 people with large followings to spread a particular message on their channels constantly the way these 12 bad people spread their bs. Not an advertisement for a product, but instead a message like “bad thing is bad” or “good thing is good.”

most of the people mentioned are outrageously rich or have access to the pockets of the outrageously rich. They basically spread misinfo as a job, nevermind the multi-network integration they can pull with that kind of production.

The report focused on these twelve accounts after an analysis of content that was shared and posted on Facebook and Twitter 812,000 times between Feb. 1 and March 16.

that’s roughly 1500 shares/posts per influencer per day. You cannot combat this with a grassroots or even modestly funded campaign. The structures that allow for this kind of misinfo need to be brought to heel, there is no reasonable expectation they would moderate that content with their current monetization structures.

They basically spread misinfo as a job

Yeah, that’s what I said. 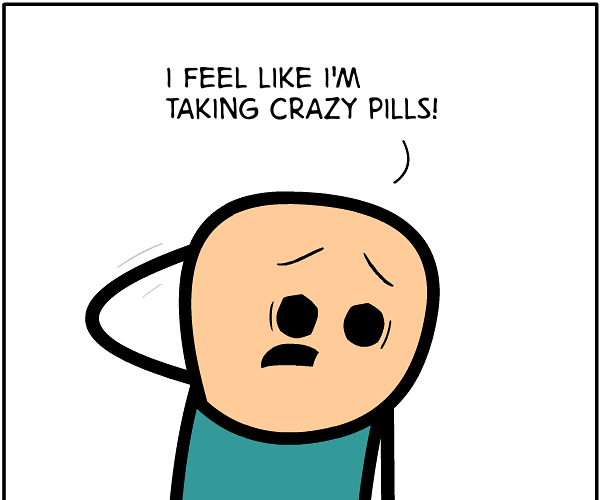