I do not know if anyone has interest in this topic, but I am a catalan living in Barcelona, and I could provide a few clues if anyone has questions.

Just to clarify: I’m not a politician or member of any political party, never been.

I have my own strong point of view, but I’ll try to be as objective as I can in my replies. Probably, starting a conversation like this one will also help improve my english a little bit, on the bright side. Hoping not to create a mess.

I’ll try to check out the forum every evening (Paris time for me), and do as much as I can to please anyone interested.

I’d be very interested in the perspective of someone who actually lives in and is affected by ongoing developments’ perspective on this. I’d love to hear whatever you have to say on the subject.

The only news I have sees about it in my general Internet reading is how the people who are leading the movement got arrested. Maybe I will pay more attention.

I am going to start by linking an article in english, published in Bloomberg, and quite accurate on more recent events. Afterwards, I will be replying one by one all of your posts.

Yes and no. There’s the complexity. Spain has a few rich regions, mainly big capitals (for southern european standards) like Madrid and Barcelona, and some tourist spots along the coast (balearic islands for example).
The “rich area” argument has been constantly played by both sides. Catalans tend to use it complaining about how much money they pay in taxes, and how little is invested in return, from the central government in Catalonia. The other way around, spanish use this argument to accuse catalans of lack of solidarity towards much poorer regions in Spain.
To me, is just an argument, another means for each side trying to win consent around their own point of view. Some people stuck with it though.
The core of the problem is, of course, much more complex. Many catalans feeling themselves different from the rest of spaniards: different language and cultural traditions, different approach to politics (in favor of a republic for example, instead of the monarchy), etc.

To summarize it all up, the historical core of this problem is national pride. But, and this would need another extensive reply, it doesn’t explain by itself the rise for independence experienced in recent years. Back 10 years ago the nationalists were thought to fill up 20% of catalan voters only. In 2017 elections (with the bigger participation ever: 79%), around 48% of votes went to parties claiming for independence.

And the distance from central government keeps growing.

Thanks @Naoza! I hope I can find my words in english to give you my own point of view at some point.
As @Apreche mentioned, and the article linked by @DigitalDeckard describes very well, politicians and social leaders of the movement have been sentenced to penaltys from 9 to 13 years in jail, for sedition. This has worsen the conflict, and a solution seems impossible at this very moment.

Protests and demonstrations been always peaceful. There’ve been massive ongoing demonstrations each year (1.5 to 2 million people) since 2012.
But those social leaders who would send violent protesters back home are now in jail. Also, there’s evidence of infiltrated police members starting violent riots to provoke a charge from their comrades wearing the uniforms. This is a common practice everywhere, though.

Will look for some more links to help you guys. It does help trying to explain this, it feels warmer, in a way. It’s comfortable.

I read the Bloomberg piece but haven’t read the city lab piece which I’ll likely look over later tonight. The thing that stands out to me is how involved European courts are. I was under the impression this was purely an internal matter.

Do you believe that Spain’s support for Turkey (the only European country to do so) invasion into Kurdish controlled Syria is related to the Catalan independence movement?

Everyone says it is, as far as it goes on public statements from political leaders in other european countries. But the truth is former regional president Carles Puigdemont is exiled in Belgium, and other members from the former government are exiled in other countries, like Switzerland or Scotland. Petition for extradition has been demanded from central court in Spain, and it’s been consistently denied every single time from european courts. Threats to incarcerate the current regional government are displayed on a daily basis.

European parliaments are growing anxious about this conflict, which demands dialogue urgently. Instead, spanish state denies it and keeps using the same confrontational strategy.

Replying to @Andy: Spain’s support for Turkey’s operation in Syria could have its own explanations (spanish monarchy has its own diplomatic gestures and interests), aside from the catalan independence movement. It is widely believed, though, that recognizing the rights of a minority inside a foreign country could weaken spanish strong opposition to catalan demands. This could be a reason why they support Erdogan, blindly.

If you guys follow twitter, I recommend you to follow Jordi Borràs @jordiborras (for the record, I do not know him in person). Photo journalist who covers social movements and unveils intentional acts of fascism. Some of his tweets are written in english. 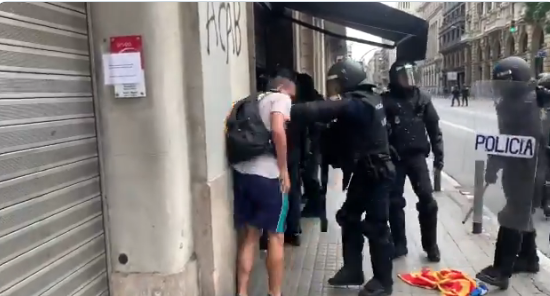 The lengthy prison sentences against Catalan pro-independence leaders have caused a huge wave of protests in Catalonia and solidarity messages have arrived from all over the world. The general strike on Friday was widely followed and saw thousands of...

How does the EU influence your thinking on Catalan independence? Regarding Scotland I read that people were more comfortable with leaving Great Britton since they wouldn’t be a tiny country totally on their own, and part of the issue with Brexit is that there would be a real boder again in Ireland.

What you say about Scotland is also what I understood at the time, and now with Brexit. It does have an influence, at least to build up a discussion or set up an argumentation.

It has been playing a great deal of influence from the beginning, here in Catalonia and Spain.

Back in 2012 it started a backfire between both sides. Politicians who were pro-independence would argue that Europe would accept and recognize Catalonia as a new state, in due time, and that it would occupy its own seat up there in EU. Politicians from central government in Spain would argue that if Catalonia achieved independence, it would resolve into it being kicked out from EU immediately. These arguments lasted for at least 5 years more.

They were false arguments from both sides.

Nowadays nobody in the side of independence expects EU to do anything in their favor, or at least it doesn’t matter anymore. The fight, the targets to be achieved, all of it has changed completely. Gradually since october 2017, and radically during last week events.

Does Catalonia have any sympathy from people in the rest of Spain?

Yes it does. Opinion is divided. There are those who understand the demonstrations and protests in Catalonia, and its right to solve this in a legal referendum. There are others who deny all those rights.

Yesterday, many demonstrations and protests happen all around Spain, in favour of Catalonia’s right for independence.

Slowly, this is turning into a much bigger conflict which encapsulates other ideals such as the fight against fascism, Spain needing deep structural socio-economic changes, and rejection of monarchy.

Tough question, and a very good one. Wish I was a historian now, to bring many references. I’ve read enough though, to jump into the fray…

An excerpt from Wikipedia may help as a preliminary: The Spanish Civil War was a civil war in Spain fought from 1936 to 1939. Republicans loyal to the left-leaning Second Spanish Republic, in alliance with anarchists, fought against a revolt by the Nationalists, an alliance of Falangists, monarchists, conservatives and Catholics.

First of all we should stablish what was the Spanish Civil War. I do not know if this makes sense academically, or even in english, but I would like to call it a heterogeneous war. For example, it’s been portrayed as the preamble of WWII, major conflicts that would afterwards be happenning in a global scale, clashed for the first time in the Iberian Peninsula. The fight for freedom against military fascists, the ideal to stablish a modern Republic, the insurgence of anarquists and the communist parties.

If all of those were’nt enough…

Religion also played a huge part, and of course, national identities. Mind you: spanish civil war started around summer of 1936 (lasted three years); back in 1934, the regional government of Catalonia had declared itself and independent state within the Republic of Spain, waking up all sorts of animosities.

Republicans lost the war. Fascism endured 40 years as a military dictatorship. During all those years, catalan’s own language and other ways of cultural expression (music, literature, etc.) were consistently reppressed by the central government.

There are clearly strong connections between the drive for Catalonia Independence and the Spanish Civil War, or even the following dictatorhsip, but these are not exclusive. On the contrary, I would say these same connections go further back, centuries back. The aim from an important part of catalan society to transfrom its regional government into a state, dates further back, and it’s a conflict that central powers in Spain haven’t been able to deal with peacefully.