After the Genji debacle, I felt it was only fair to use my next book club selection on the book most requested by the listener of this show, Ninefox Gambit by Yoon Ha Lee. That does not mean this pick is without merit. Despite being the author's debut novel it was nominated for several awards, and won some as well. It is the first book in the Machineries of Empire series.

The book itself is a fundamentally a sci-fi novel full of space battles. It truly deserves to have a space ship on the cover. It tells the story of Kel Cheris, a captain in the hexarchate, a space empire. A large and important space station, the Fortress of Scattered Needles, is overthrown by heretics. Cheris is chosen for a mission to take it back.

Of course it's not just some pulp action adventure space opera. The book is actually about calendars, orthodoxy, democracy, immortality, consciousness, memory, folklore, traditions, math, games, and more. I think the parts relating to game design where perhaps why the listener wanted us to select it.

So humble listener, I hope you are happy we have chosen the book you have requested. Look forward to us discussing it probably sometime this summer.

I’ve been waiting for an excuse to re-read this book, and now I have it.

Books two and three of Ninefox Gambit take a turn for the uninteresting, in my opinion.

Instead of the series being called “Cool Space Battles with Weird Shit and Game Design Discussions” it’s called “The Machineries of Empire” and, turns out, I’m much less interested in Empire building than I am in what made up most of Ninefox Gambit.

Not bad books, but certainly a step down from my “five stars book of the year” reading experience of the original novel. 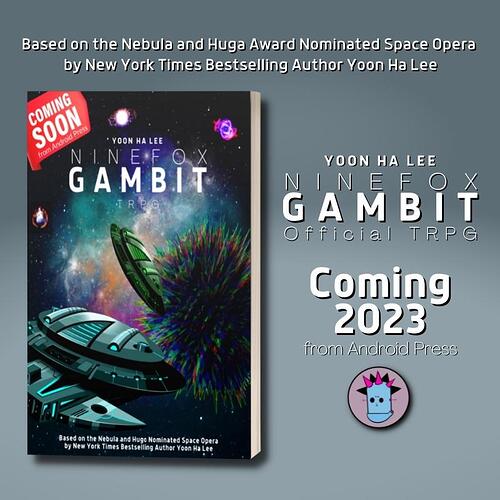 If the character sheet isn’t a blank calendar, this is a failure.

Having now read the trilogy, I am extremely happy with it. The second and third books were, for me, even more compelling than the first.

They get into the actual revolution and how to design a society. You also have clones of the same general squaring off against eachother, and a host of fun interrogation of the servitors and the moths.

I absolutely recommend reading to the end of the trilogy.

This has been on my list actually for a long time. Time to chex it out perhaps.

When you find out the deal with the Moths. You specifically will enjoy that.

Did the calendrical regimes remind anyone else of Prince of Nothing schools? All abstractions and competing ideologies.

Not the only thing I was reminded of, reading this:

I wonder what the author has read/was referencing and what’s just convergent sci-fi evolution.

And also a shot of “think, dammit!” as Cheris learns/tries to figure out what is really going on. Blindsight by Peter Watts is another one with that device.

Meta: a podcast episode where one host is “well in the second book you’ll blah blablah” is a little grating.

The author hadn’t read the culture novels before writing Ninefox Gambit, as I remember from a Twitter exchange. But now I seem to be blocked on Twitter by Yoon Ha Lee so I can’t find the tweets.

Also, from a selection point of view, I recommended both Player of Games and Ninefox Gambit to Rym as books very much in his wheelhouse, so it’s not as if it’s a mystery why they both feature board games!

I recently ran across So You Want To Abolish Time Zones again.

So You Want To Abolish Time Zones @ Things Of Interest

Laudable! Let's take a look at some of the changes that arise from this, through a simple case study: making an international phone call to a relative. Before abolishing time zones I want to call my Uncle Steve in Melbourne. What time is it...

After finishing all 3 books, something I feel is unresolved:

He had the same plan Finn and Jake had in Adventure Time with the cosmic prison.