There has been more discussion of this sport lately, and there is no thread for it than I can find. So here it is.

The New York Metropolitans lost today. The final score was 23 - 5.

I triple checked. That’s not a typo.

I don’t follow baseball, but I saw that on twitter and had to check. Took this off of MLB.com: “6 hits, 3 homeruns, 10 RBI. Anthony Rendon set a Nats record for RBIs, while becoming the first big leaguer to reach double-digits since 2007.” That hurts to be on the other side.

I went to a Brewers game Friday. We had great seats, about 10 rows behind home plate. As we’re walking in, I commented how weird it was the backstop netting only went straight up, there was no back section.

Couple innings later, and a batter fouls one back and up. Way up. And it’s coming right. For. Me. I tried to snag it, but it was coming in too hot, and with no glove I lost it.

My hand still has stitch marks.

Someone completed an Inside the Park Grand Slam homerun in the International League.

Fluke off the wall and the catcher fucked up.

Great plays in modern baseball are almost all due to defensive mistakes and luck as opposed to offensive skill and talent. 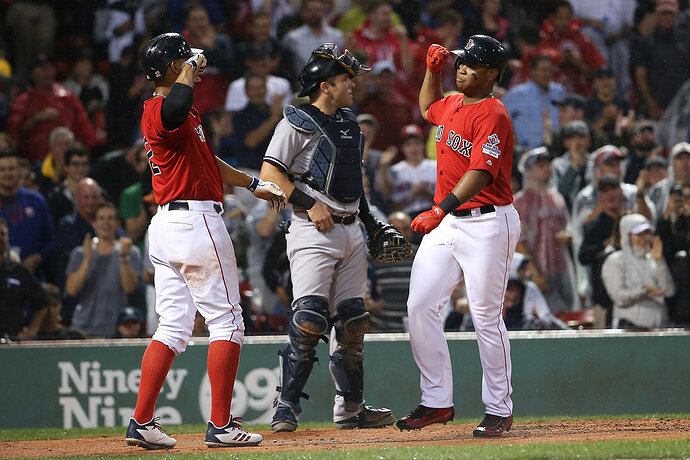 When confronted by Major League Baseball, the Red Sox admitted they were using Apple Watches in a scheme to gain an edge at the plate.

I never understood why they even have signs. Let the pitcher just decide what pitch to throw on their own. Why should the catcher have a say? If the catcher doesn’t know what pitch is coming, it will be much more exciting! They will need a lot more skill to catch it and not have too many passed balls. Pitchers might hold back out of fear the catcher will fail. That means more offense. That means more entertaining baseball.

Either search everyone taking the field to remove all technology, pine tar, and other contraband. Or just allow everything. None of these “cheating” methods pose a safety risk. None are unfair. At the end of the day you still Have to throw a ball over 100mph or hit that same ball. Stealing signs is insignificant compared to that inherent difficulty level.

The pitcher doesn’t decide which pitch to throw, the catcher does.

Pitchers spend all their time practicing. It is the catchers who know which batters are good and bad at what pitch, and they decide what the pitcher throws. A good catcher is like an encyclopedia of the strengths and weaknesses of the opposing team.

I never understood why they even have signs. Let the pitcher just decide what pitch to throw on their own.

They sorta do. The pitcher and catcher work out what they’re going to do in a rough sense before the game, and the signals are more confirming what the pitcher is going to do, rather than dictating. It best, it’s a collaborative process, allowing the pitcher to focus more on technique and execution. Plus, the catcher needs to know what’s coming next, to properly position himself - It’s not just a matter of “It will be harder to catch”, it’s a matter of “If you fuck this up you could be seriously injured.” Getting nailed with a fastball in the pros can(and sometimes does) cause serious injury and break bones. Catch a 90mph fastball on the elbow because you’re going for the wrong catch, that’s definitely the end of your game, and possibly the end of the season for you.

So, basically, if you could translate the signals:

There’s also signals to communicate some deviation from the strategy demanded by the pitching coach, making suggestions based on information the pitcher might not have or might have trouble seeing, etc. But the pitcher has the ultimate decision - catchers rarely, if ever, have mind control or telekinetic powers. Basically, what you’re asking for is already the case.

I’m aware. I’m saying they should change it. Make “stealing” signs perfectly legal. Now you have to decide. Do you benefit more by allowing the pitcher to concentrate on execution, or by keeping the pitches secret?

All pro sports need to be made more difficult in light of advancements in training, strategy, technique, and technology. Allowing sign stealing is just one of many such ways to accomplish this.

Honestly, despite your kinda getting it wrong what signs are for, I’m okay with sign-stealing. I mean, it’s not like batters are wearing earpieces, so you have to get the information to them another way, which should provide an amusing challenge, and there’s nothing stopping them from switching up signs.

Not if you use technology or cameras and such. I say let em use whatever. Spit on the balls and cork the bats, too. Full power.

I feel like corked bats may break/splinter more easily.

I feel like corked bats may break/splinter more easily.

Not if it’s done right, but even if done right, there’s no power gain - the cork acts more like a shock absorber, than giving extra power, meaning your shots don’t have the same power. AT BEST they perform identically to a regular wood bat.

Then why are they illegal at all?

Also re corked bats. Why not just allow metal at that point?

Yeah, aluminum bats would have a much bigger impact on the game than corked bats.