Behold the meta thread wherein we argue about argumentation.

It turns out SMBC has this week perfectly captured the way Scott and I interact. 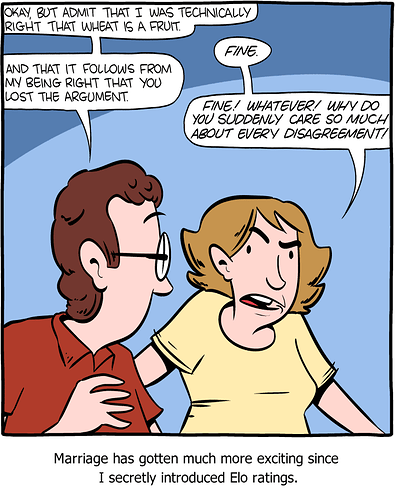 I heard a really interesting interview with Rou Reynolds of Enter Shikari. I’ll mangle it here but the gist of it was to not let yourself get angry and bull headed but understand the opposition then get them to see why what they think is wrong. Kicker is its behind a pay wall, but dam was it a great interview from a dude that has been in political activism for a long old time.

[quote=“SkeleRym, post:1, topic:687”]
It turns out SMBC has this week perfectly captured the way Scott and I interact.
[/quote]I actually know someone who stopped listening because the found the way you and Scott argue on the show - not that you do it, I mean specifically how - to be incredibly frustrating.

Early GeekNights was a time when I would seek specifically to get Scott to concede that he was wrong, irrespective of the actual truth of the matter. Though usually, they were largely theoretical or ideological arguments, so it was a matter of scorecarding and point-for-point aggression.

Now I mostly only argue specific practicalities, and since we disagree less, the arguments aren’t as fun.

We used to consume a lot more media/games, so we’d review things where our opinions differed, sometimes wildly. But lately, we tend to both have the same opinion (within a range) of the things we mutually consume.

The moral is we need to consume more media one of us doesn’t like and put some tinder in that furnace room.

Isn’t that problem the fact that you both won’t watch something that one finds valuable but the other doesn’t. (Mainly Rubin tends to refuse to consume something just for discussion sake?)

The real problem is that no one’s touched the subject of skub in a while.

There are very quick jumps to absolutes in many Scrym arguments. The goal for any listener is getting used to it. It’s fun when it comes to pop culture, but other times it is really frustrating especially in the age where you can get shit on for basically nothing. The episode that sticks out to me on this was “Peeple’s Rise and Fall.”

Rym: “What if you were being slandered online for being Gay in Russia.”

Scott: “Then just move out of Russia.”

Scott: “Then you post on them back. No one really knows who I am.”

Rym: “But say it’s just people posting online so they can bully you. You don’t have the clout to overcome it.”

Scott: “Okay. So? How does that really affect you? If 4chan exists, why does it matter another website that could use this matter?”

That felt like a big disconnect in this one particular instance.

You fucking people… there is more than one frame of reference in this world, so unless you establish your parameters ahead of the argument, your words mean NOTHING!

Dendrologically speaking, the part of wheat that we eat is a fruit. Culinarily speaking, it is a grain/starch. So FUCK the idea that everything has one finite categorization and cannot be more than one thing at a time!

Also read the definitions section in statues or you will be wrong when you say what the law is.

Also, Scotch is good when it is the Islay kind and I have pain that needs to be drowned out.

This. You take great pains to define what a “game” is in your gaming panels, and I’d imagine you take the same pain to define “anime” or “cartoon” in those panels (I don’t watch those, for reference), yet when you two get into an argument you don’t bother defining anything.

With that said I agree with Rym on a lot of things and Old Man Scott is Old Man.

Maybe I should start a thread about Old Man Scott of Your Day.