So I’ve been tinkering around with the Antifascist Action flag and logo, and I want to switch my avatar to one. I’ve got three designs so far, and I can’t decide which is the most effective. I lean towards the one with the black replacing the blue field because it’s close to the antifa flag design, but removing the blue (symbolizing loyalty) seems to send the wrong symbolic message. Replacing the white stripes of purity with black because, well, who are we kidding, this election threw purity down the toiled, seems better, but its not as nice aesthetically. The regular flag looks pretty good, but again, I lean towards the aesthetic of the black field with white stars.

What do you forumites think? 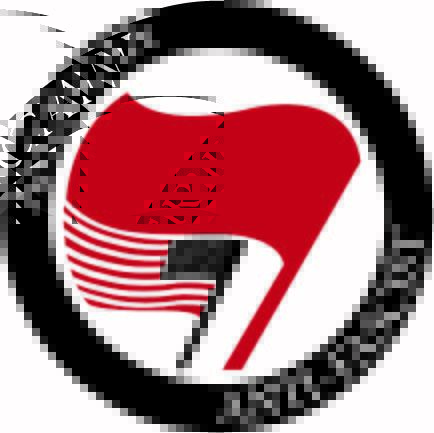 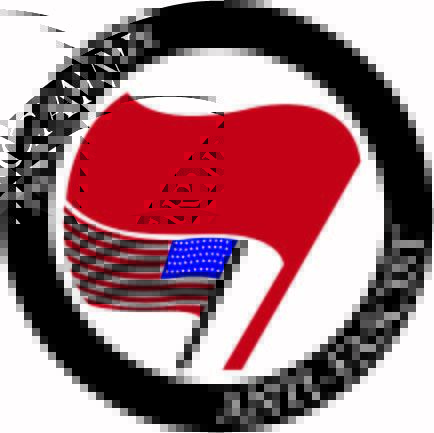 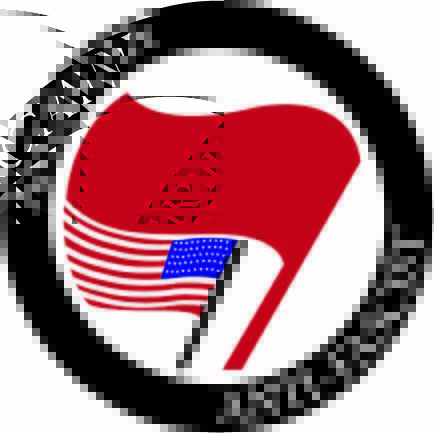 I like the last one, both design-wise and symbolism-wise.

I like the last one, both design-wise and symbolism-wise.

While I think the third works better symbolism wise, the first is aesthetically more pleasing.

The stars have to match up with the waviness of the stripes.

Black and red definitely.
I messed around in paint. 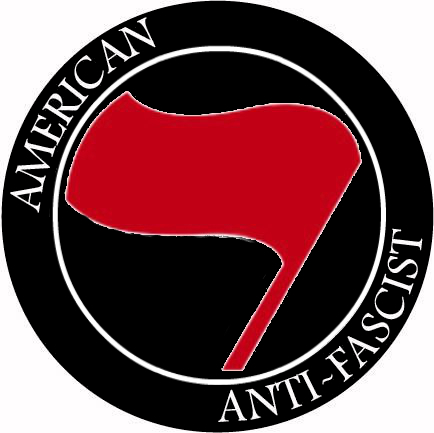 I mean you could make the background of the flag striped too, like have 1 or 2 middle white stripe in the background red too without having to place the American flag in it but still decompose the flag’s components but be recognisable while using revolutionary iconography. I’d need to devote more than a few minute for that without the source file though. 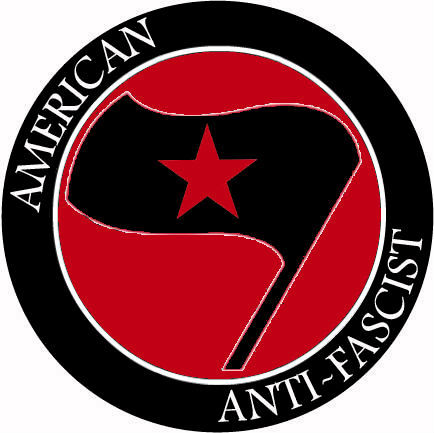 I want to have the US flag in there somehow. The AA symbol typically has two flags, one red and one black. I’ve seen a variety of designs on actual flags, from the logo on a flag to a diagonally divided red/black flag.

I think what’s throwing me on the two flags with the blue is the intensity. I think it may be too bright and clashes with the red.

I toyed with the idea of having the flag elements in the background, but it ends up reading messily, or more like a Texas or Puerto Rico flag as opposed to the US flag. The second one there looks almost Chinese because of the red star.

So far, I’m thinking changing the blue to a darker blue in the third logo, and fiddling with the star position.

I like the idea of this, but I don’t think the anti-fascist symbol is known well enough for people to get what you’re trying to do. I had never heard of it or seen it before, until I just googled it.

Just a suggestion, but maybe try to have a logo that’s more universal and not based on something that most people aren’t familiar with?

The original concept was to include symbolism from the anti-fascist movements and tweak it to be specifically American. I literally couldn’t think of any antifa symbols at all, and had to do some poking around the web to find anything. The two flag/red black design seems to be the most popular within the groups claiming to be antifa.

They generally have a low profile on the web too, mostly with blogs and lacking a major hub. It seems like there are hundreds of antifa groups all over, mostly unaffiliated beyond their general attitudes of: punching Nazis is not only moral, but a duty. Most of the people in the groups are young (20-somethings), and I’m looking to try and find older, wiser people who are part of the groups and more cerebral and thoughtful in their actions as opposed to toeing up to the anarchist “Fuck everything” line.

They tend to get conflated, intentionally or otherwise, with anarchist groups with some anarchists actually adopting the symbols but acting in an anarchist method, instead of focusing specifically on shutting down people like Spencer or Milo. That was actually seen recently with several black bloc protests where you can see people participating in generally anarchic behavior while others are carrying the red/black flags.

Anyhow, the message I’m trying to convey with the logo is that I’m both a citizen of the USA, but I won’t stand for Nazi/quasi-nazi bullshittery.

I tooled around with the Iron Front symbol (original below), but it didn’t inspire me as much. 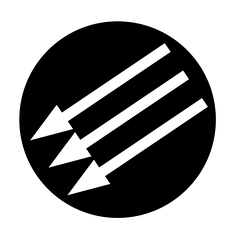 Maybe do something with the Statue of Liberty fighting off some Nazi or Trump symbol instead?

Like I said, I like the design, it just doesn’t mean anything and I don’t think most people will get it, so it kind of loses it’s impact.

I go back and forth between the symbol that someone who is involved in the movement already will know, and one that would be easily recognizable.

So when I see these designs, with a huge red flag bigger and above a red-white-black stars and stripes? I just see a miss-mash of confused symbology. All of it wreaks of the flags you see in movies representing fictional fascist governments. You know, like the Norsefire flag in V for Vendetta: Norsefire - Wikipedia

It’s only when I read the writing do I see it’s actually ANTI fascist. From the colour palette I would guess the complete opposite.

Here’s something I think you should keep in mind: 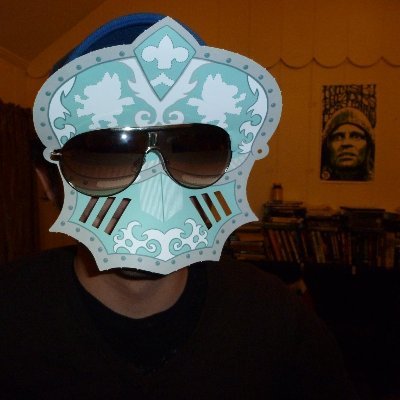 America's slow but very real decline into a fascist state as told by the Milwaukee Bucks logo https://t.co/UTVsEyq3kg

You know what looks anti-fascist to me? A cartoon of a smiling deer. How about making your logo look like something a happy person would look at and feel more happy?

Because anti-fascism isn’t generally a happy, huggy idea. It’s that fascism needs to be halted at all costs, sometimes that means punching Richard Spencer in the face in public on multiple occasions.

If I’m going opposite, I guess I’d have to go white/neutral and green. Red and black work because black is often used by the antifa to identify and unify themselves during protests, and red is tpically symbolic of bravery/blood/strength. The US flag has red in it already, and dark blue is visually close to black, which is why the first flag is so aesthetically pleasing.

That said, The opposite color idea is interesting, but it would certainly make the US flag clash more with the Red/Green being opposing colors. I believe the red/black is intentional, because they’re visually powerful. I think i’ll try some color swapping. The problem with other antifa imagery is that they tend to be a bit complex, or just not very good: 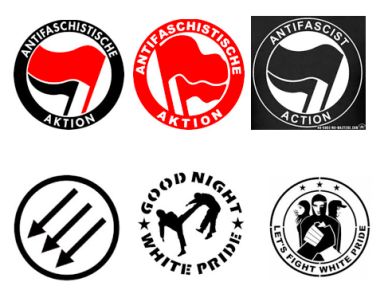 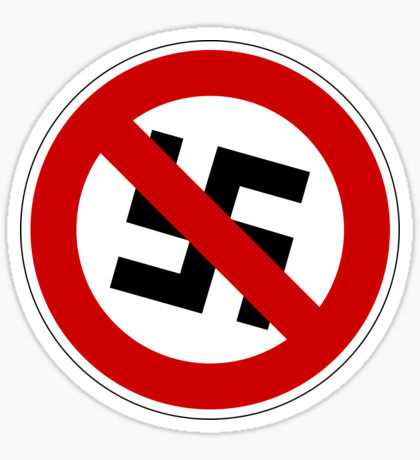 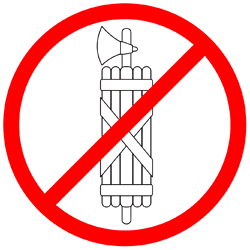 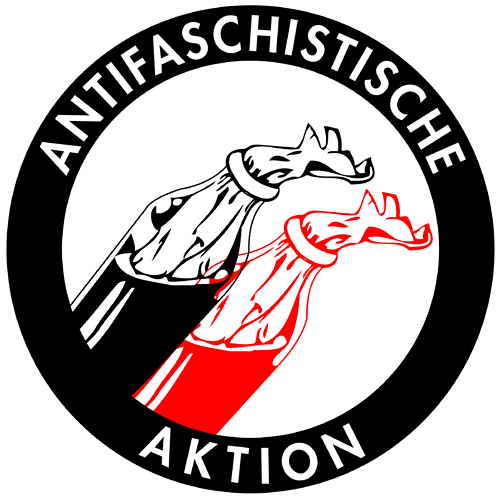 So you can see some of the symbology isn’t easy to work with. The flags seem to be the most prevalent, so I was thinking I should stick with those.

I’m actually a big fan of the new logo. Notice the neck forms an M for Milwaukee, and the little antlers in the middle are a basketball.

I favorite reply in that thread was “In his dark heart, the Turk lusts for Wichita”.

I’m with you on the new Bucks logo. It’s very clever.

The unfortunate thing is that the American flag is draped around fascists at the moment which muddies the message, similar to the political climate leading up to current events.

I used a red star on a black background for the ties to socialism, almost what anti-fascism is. The iconography for modern communist countries tends to be yellow stars on a red background, however for me I don’t see the association as negative. Likely different due to communism being embedded into American society as a negative.

On a side note, the point of using black, white and red was to also take away the colours from Nazi iconography. By producing more flags or iconography with black, white and red for multiple purposes, it dilutes the association with Nazis. e.g Look at blue, white and red. So many flags use this set that it requires people to pay attention to what flag is being presented to work out what it means e.g. is it Russia or New Zealand.

I’m not a fan of any of the #antifa iconology. It just feeds the right. Don’t let them take control of the American flag and don’t provide a new flag for them to demonize you in the eyes of middle America.

I’m not going to lie. I’m a person that likes the visual aesthetic of nazis, soviets, etc. Obviously I can not more strongly oppose everything they stand for, but if those badass clothes weren’t associated with absolute evil, I would totally wear them in a cyberpunk/military kinda way.

That being said, if you’re talking about branding for anti-fascism, you have to get as far away from that aesthetic as humanly possible. If you want to look at examples of people doing it right, look at the rainbow flag, the peace sign, the yellow smiley face, tie dye, or pretty much any other flowery hippy stuff. We need the bright and friendly colors, not black and red evil shit. A black circle with red stuff in it just screams “Angry evil guy here!” Not good. Get your care bear on.