A continuation of this thread.

This thread is for the car enthusiasts of the forum, because it seems like we occasionally take over other threads.

Welcome to the new age, folks.

My Mum for the first time in her life took notice of a car’s looks and said she would consider it based on just aesthetics when we were on the way driving behind and pulled up beside it.
It was an Alfa Romeo Giulia Quadrifoglio.

What does it mean?

On other news I really want to at least sit in a new Honda NSX if not test drive it (even though I can’t afford one lol). It has some unconventional looks that are eye catching. However from a performance stand point it doesn’t seem to dominate any particular category even though it leverages hybrid technologies. It could just be the weird review given by James May on The Grand Tour though. The price point is in a weirdly high spot when you compare it to the Nissan GTR which has great performance but a relatively trash interior.

I was talking to a friend who runs a car garage. Turns out Japanese cars are a lot cheaper when you are not paying for import. So hopefully I’ll be able to get the Subaru I’ve been wanting for the last couple of years next year.

Turns out Japanese cars are a lot cheaper when you are not paying for import.

Well, yeah. Importation is a fee from pretty much any country.

It’s not just cars. It can be from any product.

Ah but I am not a clever man. Also it is staggering how big the difference is. A car that was going to take a couple of years of saving now takes 6 months.

UK licence, although there is a hell of a lot of faff to get through, so it translates easily. Don’t have to take a test which is nice and easy.

Toyota has committed to moving forward with the GT86, as well as re-starting the Supra and MR2 lines.

Which is kind of huge news to me, considering how much I fucking love MR2s, the original AE86 killer.

I saw the autonomous cars in the above video at Toyota city in Tokyo last year, they do indeed look great.

I love the old twin turbo charged Supra.
I have that car shape and features embedded into my head, I can recognise even the most beaten up one.
The MR2 is hard to mistake as well.
Thinking about it the GT86 catches my eye every time I see one.

A review of the latest, and last, true Holden sedan.

Got a recent Mazda 3 upgrading from a 95 Camry to something that was only built in the last 5 years, small car with newer engine, surprisingly rapid acceleration. Acceleration pedal is super sensitive and the clutch is super light. Also now 6 gears, seems ok and seems to feel better when accelerating to max speed from stop.

It was either this or pay another 10 grand for a Toyota GT86, which is still something I want at sometime, maybe in a few years (although a Supra might be in the option list at that time lol).

It’s great how much cheaper manuals are on the second hand market. I would have seriously considered the recent Honda Civic hatch but because it’s assembled for the European market the indicator is on the wrong side. Even though it’s slower I would have got it because your revs are shown in a colourful light up on the dashboard underneath the wind shield with the speed dead centre, which was really nice for manual driving.

@Churba thinks this is a Toyota Supra from today’s discussion on FNPL. 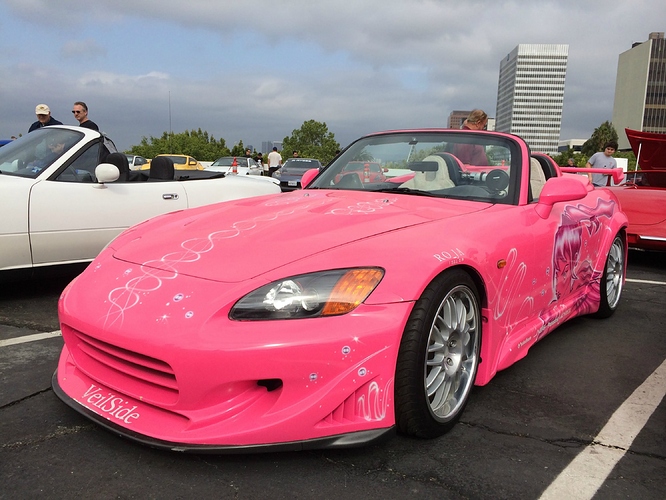 No jokes this is how my car will end up.

Yeah, I muffed that one. I looked it up after, because it was bothering me, I remembered wrong - she drives an S2000.

I have acquired a 355 (5.8L) small block chevrolet V8 short block. It’s a standard 2 bolt main block, .030" overbore. It came out of a sort of drag race looking S10, the owner got a 4 bolt shortblock and swapped his stuff over. Since it’s probably seen racing abuse the plan is tear it apart and check everything over. If everything checks out, re-ring it and assemble in the garage and acquire parts to build a torque monster to push the Caprice around. If things are trashed, strip the block and then buy a rotating assembly kit online and assemble. Probably get a stroker kit since it’s only $150 more and is just better. That will make it a 385 (6.3L).

Nice, that should get that barge shuffling along at a better pace.

My life, my caprice hasn’t actually run in over a year.

Do what you love and enjoy. Who cares about whether it actually runs or not.