So what do you suggest? Close down the cons?

So what do you suggest? Close down the cons?

If a con can’t put together a policy that lets them kick out trolls and nazis, that con doesn’t deserve to continue existing.

When a con has a strict and prescriptive “Code of Conduct” and enforces it to the letter, in almost all cases that con’s staff are using this as an excuse to let the bad actors stay on purpose.

I don’t think that’s the case here (though again maybe I’m just wrong). I think they just never had their rules tested in this manner. The post mortem even includes (paraphrasing) “These rules were modeled to deal with a drunk attendee gropes a speaker and another drunk one starts yelling racial slurs, they weren’t designed to resist an outright targeted infiltration attack”

My impression is that the con 1 part blindsided and 1 part too slow to change with the times, I just think this should serve as a wake up call to other events.

At least I hope so. If you’re right and HOPEcon and other similar events are secretly evil then… well fuck.

I think they just never had their rules tested in this manner.

Bullshit. They can kick people out regardless of their rules. It’s a private event.

They chose not to.

The moment a con hides behind “they’re not technically violating our rules” that con is a garbage con.

At least I hope so. If you’re right and HOPEcon and other similar events are secretly evil then… well fuck.

I think senior staff are a combination of evil and cowards.

The rest is pure incompetence. I mean, even at a con like ConnectiCon I would have easily been able to direct some staff to deal with a situation like this.

So, only question, Did you read the postmortem or are you just going by my little write-up? I did miss some nuance. But I do think I’ve slightly shifted my perspective. I was perhaps biased because some people I liked and respected were going to this con.

Did you read the postmortem or are you just going by my little write-up?

I read it. It reeks of incompetence.

Remember though, that we studiously avoid attending cons that are run poorly regardless of the quality of the attendees or content. Life’s too short to interact with poorly managed things.

Then in that case I’d like to thank you for giving me your perspective. It is a good one and a hell of a lot better than the hand-wringing I was doing before.

Cons will either solve this or dissolve.

I’m confident that if this happened at, say, a PAX, the Enforcers would make the right call and deal with it effectively. I hope that MAGFest would handle it well, but it’s hard to say for sure.

Hotel/Convention staff will usually get rid of folks like that if the “Convention” folks won’t.

I think they would. The head of MAG hangs out at the same spot every year all night and I hang out with him. He’s pretty good guy. Last year he had a thing where basically an attendee got complaints about him and the Gaylord tracked the guy down and he just texted them back with “throw the book at him” He’s not shy about throwing people out. For any reason.

I know that story, that is why the Gaylord likes MAGFest.

According to Paul (magfest guy), it often becomes a “fight” between convention staff and hotel staff. He was very grateful that the Gaylord and MAG seem to see eye to eye on this.

Harassing someone while remaining within the letter of the law is near the top of any bully playbook. They don’t even need to be told this strategy it is so natural and obvious. When the long arm of the law doesn’t come down, the victim is forced to take matters into their own hands. They end up being the first one to break the rules as written, and are now the victim of the authorities as well as the bully, who gets off free.

This can be seen playing out on every schoolyard on earth. It is perfectly understandable why this works on children, but for it to work on adults? For authority figures, be they teachers or convention staff, to not see through such a basic situation is an utter disgrace. I dispense a thousand dump trucks of shame upon them.

I’d probably add something along the lines of “If staff thinks you’re generally being a dick, you can be removed,” albeit perhaps in more formal legalese, which also would include those cases you mentioned.

Any con whose staff doesn’t those Nazis were being dicks either is a shitty con and/or needs to fire the staff who thought their behavior was okay.

HOPE has been around for a while (20 years I think) and has overall a good rep, so I think there is a decent chance they’ll fix their issues. However, the issues do need to be addressed.

I know my dumb self is rolling in here super late to the party, but have we confirmed whether or not the WH’s editing of video footage constitutes violation of federal laws? I mean, some of us realize it’s propaganda, but it would be nice to have other institutions back up our validations officially.

Are you talking about the recent Trump/Putin summit? Because that wasn’t quite editing video footage. There actually was a mistake and a reasonable reason why part of Putin’s answer, saying he wanted Trump elected, was cut out from the transcript.

That being said, the fact that the White House hasn’t gone back to correct the official transcript is the problem. 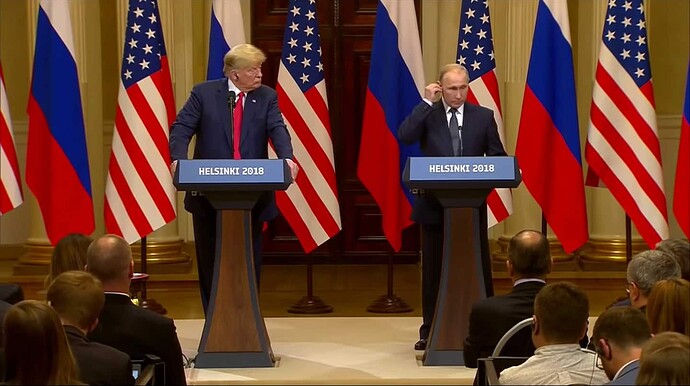 Analysis | No, the White House didn’t intentionally edit a question to Putin...

A conspiracy theory that isn't.

""What happened? If you watch the videos, it’s pretty clear. At some point in the middle of that question, there’s a switch between the feed from the reporters and the feed from the translator. In the White House version of the video, you can hear the question being asked very faintly under the woman who is translating saying “president.”

If you’re wearing headphones, you can notice how the latter part of the question is suddenly audible in the right earpiece. At first, the right channel is only the translator. Mid-question, the reporter is suddenly heard in both left and right as the translator feed drops out. Notice, too, that Putin then picks up his earpiece — through which he can hear the translations — and puts it in his right ear.

Our transcript and the White House’s were apparently based on the feed that runs only in the right channel. A White House official told CNN’s Abby Phillip that its transcript “did not have Mason’s audio turned up in time,” referring to Reuters reporter Jeff Mason, who asked the question."